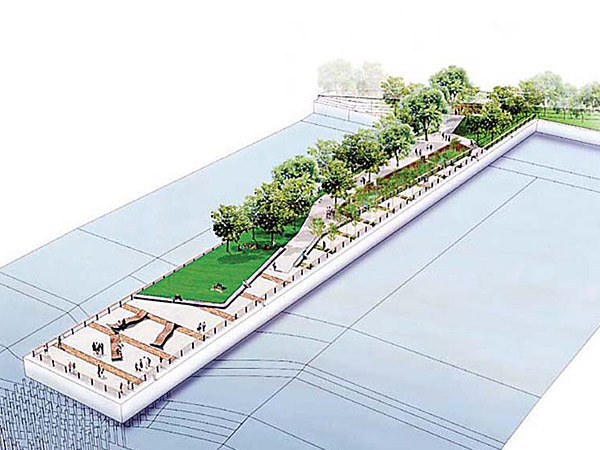 Feature Image is a rendering by Bryan Hanes

Before you get too excited, unlike the Spruce St. Harbor park that opens today, the new park which will be located at forlorn pier is not set to open until 2015.  Currently it’s in pretty bad shape if you ever happen to notice it.  The pier which protrudes from a shopping center off Columbus Blvd. has been fenced off for years.

In a statement released to the press Mayor Nutter stated, “This park will supply green space in a section of the city that really needs it.”  He isn’t lying.  The plans for the park include wooden benches, open areas for sunbathing, hammocks, and picnic tables.

The Delaware riverfront has been slowly but surely been receiving the attention it needs to make Philly a more attractive city for potential residents and visitors alike. Although, this new park isn’t a significant at the moment the Delaware River Waterfront Corp. stated that this new park is part of a 20-25 year plan to create similar parks spanning from Pier 70 to Pier 53.  Then eventually all of the parks will be connected by what they are calling the “Delaware Trail.”

Even though we won’t be able to enjoy the park for a while it is always great to know that the city is still looking to improve by creating more green spaces.