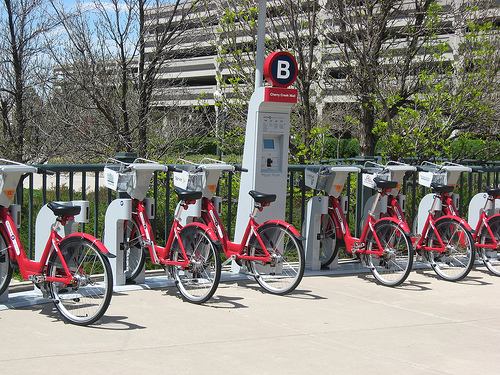 For those who traveled to other major cities in recent years, you may have noticed an implemented bike share program.  Neighboring cities, NYC and DC, both have launched this program successfully.  For those who may not be familiar, bike share is essentially the same thing as the car share programs.

Mayor Nutter announced that the firm B-Cycle, based in Wisconsin will implement the program here in Philly.  B-Cycle currently runs 30 bike share programs across the country.  They plan to place bikes at select locations throughout the city.   These stations will be mostly solar powered and contain numerous bikes that can be rented at a nominal fee per ride.  The bike program has not announced Philly’s rates but have stated that riders with memberships will enjoy free rides for the first 30 minutes, fees will occur thereafter. On their site B-Cycle advertises $69 annual rate specials that run for a limited amount of time.  Their regular annual rate is listed as $80.  However, Nutter has secured a grant to ensure even those without credit cards will be able to enjoy the system.

The city will also be able to generate revenue from this program by allowing advertising on the bikes as well as the bike stations.  If the stars are aligned right this could mean extra money generated for the crumbling Philadelphia School District.

All of this is great news.  The only drawback is that the bike share program will not be launched until Spring 2015.  That gives you plenty of time to hit the gym and improve your cardio in the meantime.