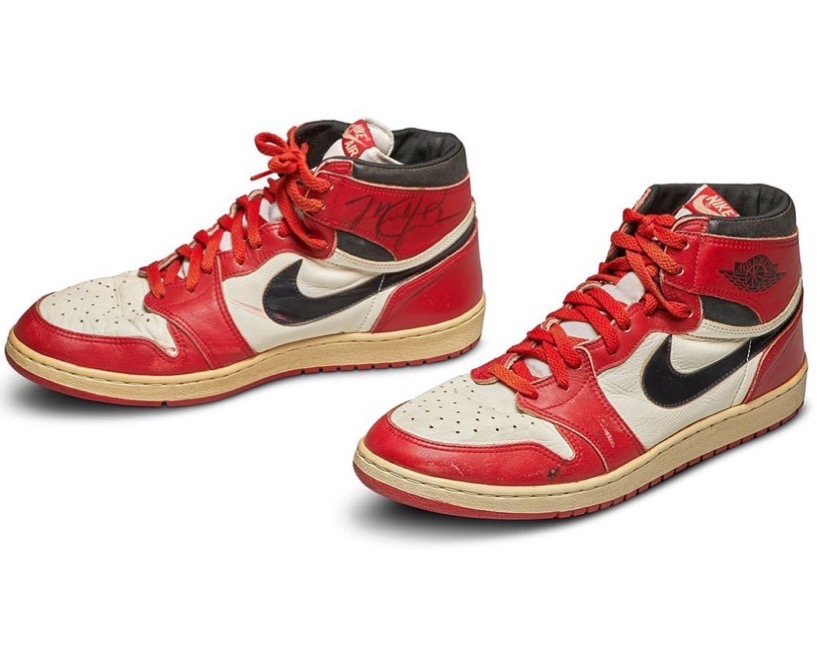 With the hype of ESPN’s The Last Dance it seems that no one can get enough Michael Jordan. Arguably the greatest player to ever lace them, he broke many records while he was a player now he’s breaking records in auction houses.  A pair of Michael Jordan autographed game-worn kicks from 1985 sold for a whopping $560,000.  This amount was three times the estimated auction price, breaking a world record for sneakers.

Slam Dunk! Michael Jordan’s #GameWorn, #Autographed Nike Air Jordan 1s sold in an online auction today for $560,000, setting a new world auction record for any pair of #sneakers – surpassing the previous auction record of $437,500 set at Sotheby’s in July 2019 by the Nike Waffle Racing Flat ‘Moon Shoe’. One of the most important basketball sneakers of all time made exclusively for the legendary NBA #ChicagoBulls player in 1985, the pair was sold to coincide with the final episode of the popular ESPN documentary ‘The Last Dance’, which spotlights the Chicago Bulls and Michael Jordan. 🏀 #SothebysAirJordans #MichaelJordan #TheLastDance #Nike #AirJordan #Jumpman

The J’s were auctioned off by Sotheby’s with 10 bidders from around the world competing for the prized memorabilia.  The Nike Air Jordan 1’s were highly sought after and it didn’t long before the bidding war escalated, driving the value up by $300,000 within the last twenty minutes.  Sotheby’s stated that the bidders spanned six countries across four continents, thus showing Jordan’s global impact.  The sneakers were previously purchased on eBay back in 2012.

The $500K price tag beat the previous record also held by the Nike brand and owned by the same person. The Nike “Moon Shoe” sold for $437,000 last year.
The waffle-soled running shoes, were one of 12 pairs ever made, were designed by Nike co-founder Bill Bowerman for the 1972 Olympic Trials. 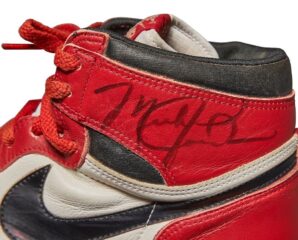 The Nike Air Jordan 1’s were made exclusively for Jordan, and featured red laces instead of black and white.”Produced between February to April 1985, Jordan wore the present pair of Air Jordan 1s during an early, pivotal point of his career and thus catapulted the sneaker’s popularity,” Sotheby’s said. “Wearing mismatched shoes most of his career, the pair is in a size 13 (left shoe) and a 13.5 (right shoe).” The right shoe features Jordan’s signature in permanent marker.

Making these shoes even more rare was the fact that Nike didn’t even offer mid-top sneakers to the public at the time — only highs and lows, according to Sotheby’s.
It definitely wasn’t a coincidence that these shoes hit the market during the run of The Last Dance.  The 10-part documentary  has garnered an average of 6.1 million viewers, making it the most watched ESPN documentary ever.
Continue Reading
You may also like...
Related Topics:1985 game worn michael jordan sneakers, auction, autographe jordans, game worn jordans, jordan 1's, nike moon shoe's, sotheby's, the last dance, Top Page Posts

The Phillie Phanatic Will Be Banned if Baseball Resumes This Year!
Somebody Created a NBA 2K Simulation With Will Smith and It Looks Amazing!
To Top
Get the Coolest Philly Events & News Emailed to you Every Week!