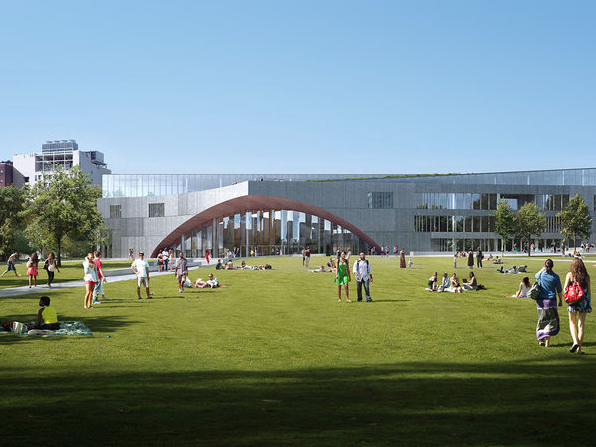 Temple University has come a long way over the last decade.  Alumni who haven’t been on campus in the last 5 years or more would have a hard time grasping just how evolved it has become.  Now the university is adding a library that will make all other Philly universities envious.  Beginning late next year crews will start working on Temple’s new $190 million library.

What does $190 million get you? Well for starters the most eye popping amenity features robots roaming aisles to retrieve books for students. Yes, you read that correctly.  Something you’d see in a sci-fi flick will become a reality.  Basically how it works is, students will be able to order books through an online system.  Their orders will be relayed to robotic cranes with mechanical arms that will then zip through the book aisles and retrieve bins containing the specified order.  That bin will then be transported to a library worker who then hands it to the student.  In total the whole process would take several minutes.  According to university officials the robotic crane system will feature about 2 million volumes in bins stacked three stories high.  Only about 180,000 volumes will be on the library floor which frees up tons of space.  However, this isn’t the first time a university has adopted a robotic crane system.  Both the University of Chicago and the University of Louisville both employ this technology.

The structure itself will be pretty massive.  Spanning one city block from the current Barton Hall on Liacouras Walk the structure will reach Polett Walk to the south up to Norris St. to the North. In total the library will be 210,000 sq. ft. and will also feature a large green space that will  be located on the east side of the building.  The large green space is something Temple has desperately been lacking.

If you are still not impressed, the new library will also treat Temple students to an outdoor balcony with sweeping campus views, large meeting rooms, areas for special events, as well as advanced technology accessible to students such as 3D printing. So what will become of the current Paley Library you may ask.  Well Temple plans to transform the existing library into a welcome center complete with cafes, common areas, and classrooms.

The new library is scheduled to be open to students in 2018.  The project is funded by both the state and the university.  The state will be contributing $140 million while Temple will be putting up about $50 for the project which was designed by the architectural firm Snøhetta.