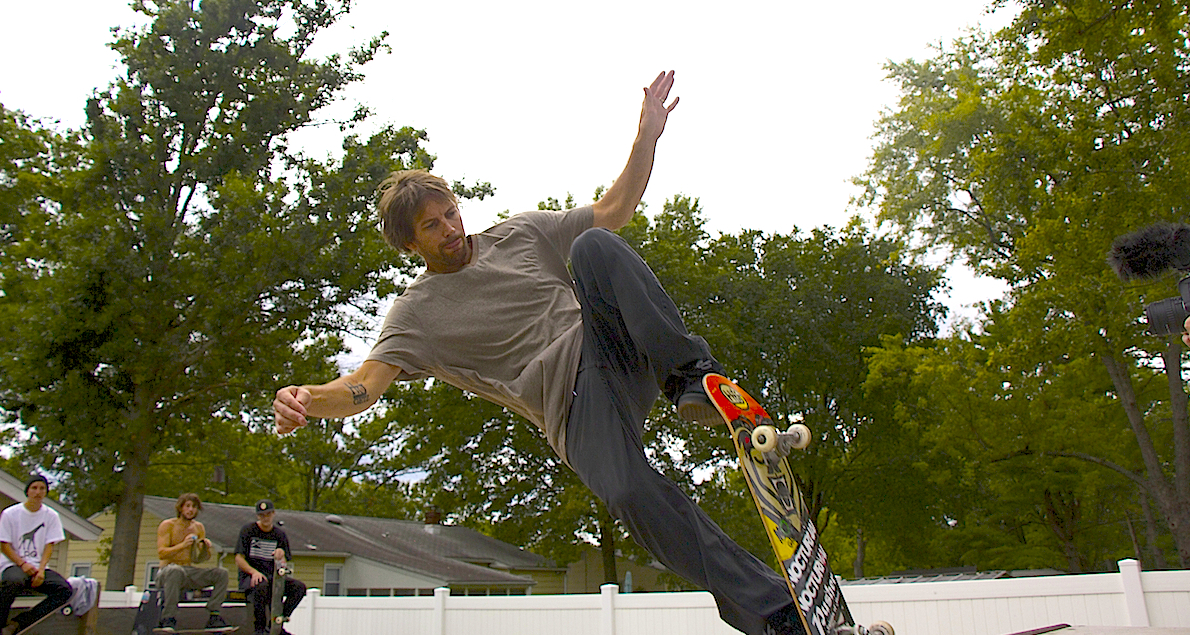 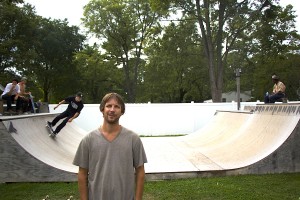 Kerry’s backyard is a playground for up-and-coming skaters

“The early 2000’s was prime for Philadelphia,” Kerry recalls fondly.  “It was the prime place to be, you could still skate Love Park, Josh Kalis, Stevie Williams, all these guys were filming there.  Brian Wenning they were putting out video parts after video parts of just Love Park footage and City Hall stuff,” Kerry added. The Philadelphia skate scene was thriving and the culture received little resistance from the city, creating street legends and household names.

However, as time passed and corporate sponsorships grew, many of the faces that helped make Philly a hub for skaters from around the world, began to leave the city and with each departure the skate scene began to dissolve.  “A lot of those guys moved away and to me [the skate scene] looked like it kind of faded away,” Getz recalls.   Although many of the prominent skaters departed the city of brotherly love, one of it’s loyal siblings decided to stay and nurture the culture.

Since rising to fame in the early 2000’s, Kerry Getz has been keeping himself active in the skate scene.  Opening up the popular skate shop Nocturnal (533 South St.) which has become a place to not only buy boards, but also a safe haven for skaters to come together, hang out, and indulge in the skate culture. “I’ve been up to pretty much the same stuff I’ve always been into. Just taking care of the Philadelphia skate scene with Nocturnal skate shop,” Getz proudly states.

The shop isn’t the only thing Kerry looks over.  His Nocturnal skate team is also making waves.  With a host of young and talented skaters, the Nocturnal team looks to revive a skate culture that was once bursting at seams.  Leading the way for team Nocturnal is Getz’s protégé, 23 year old Kyle Nicholson. “Kyle Nicholson is 22-23 and he’s coming up in the skate industry big time.  So keep your eye out for him, he’s a killer.  He destroys everything in his path,” Kerry boasts proudly.  If that isn’t a cosign, then I don’t know what is.

In Kerry’s eyes the future looks bright and teeming young talent. Although the Nocturnal team is poised to make noise, the city of Philadelphia hasn’t been helping the cause. Popular skating destinations such as Love Park and City Hall are now off limits as well as a host of places around town, making it increasingly difficult for street skaters to hone their skills. These small inconveniences along with the injuries skaters consistently battle with are the things that don’t make the highlight reels. “A lot of people just see the video clips where everybody is landing stuff but some of those tricks might of taken weeks to months, to go back to the spot because you get kicked out after 5 or 10 minutes and you drive an hour to film at a certain spot.  It’s a constant battle to get one trick that’s going to go by in a video that’s like 2 seconds long.” 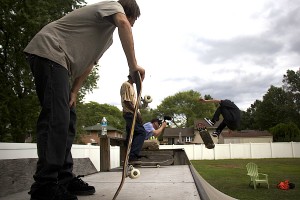 Kerry Looks on as a skater looks to land a trick

Security guards and injuries weren’t the only obstacles that stood in Kerry’s way as he was coming up in the skating world.  He vividly recalls a time when his life could’ve went in another direction by hanging with the wrong crowd.  As Kerry began to stray away from skating his mother intervened and encouraged him to get back on his board and chase his dreams. “For a while I kind of got away from skating and started hanging with the wrong crowd and my mom was like ‘Now you’re getting into trouble, you’re doing this and I used to love it when you skateboarded.  You were always just focused on that, you weren’t getting in trouble.  I want to support your skateboarding but if you’re hanging with these kids I am not going to help you out.’ ” At the time Kerry’s mother was giving him a lecture, he also had his eyes on a new car.  She leveraged Kerry’s desire for new wheels to get him back to skating.  “My mom was like I’ll cosign for you if you stop hanging with these kids and get back on your board and just focus on this.”

In a sense if Kerry’s passion for skating never manifested, his life could have gone down a deep, dark path, “It absolutely changed my life, it kept me on track,” Getz admits.  Knowing the pressures and pitfalls that the youth face in Philadelphia is the reason why Kerry holds Nocturnal skate shop near and dear to his heart.  To Kerry it’s more than a shop, it’s a place of solace, a place where youth can convene and stay out of trouble. “I’ve always wanted to make sure that there was a good skate shop that kids can come in and get all the hottest new products and just feel free to hang out, watch a video, just a good vibe,” explains Kerry.

Good vibes is definitely what Kerry Getz and his Nocturnal team are promoting in Philly these days.  In a time and place where the sport has received black eyes, Kerry not only wants to ensure the culture moves forward in Philly, he wants it to thrive. Although, many of the local skating legends have moved on, Kerry understands that, like with most things in life there are peaks and valleys.  Philly may currently be in a valley at the moment but Getz is optimistic about the future of Philly’s skate scene adding, “There’s always a new group of kids and there’s always hungry kids out there that want to do the things that Josh Kalis did.  The things that Stevie Williams did.  It never ends it just has some ups and downs.”

Be Sure to Support Kerry Getz & the Nocturnal Team at:

PYT Puts Receipt of McCoy’s 20 Cent on eBay and It’s going for $100,000!
Franklin Mills Gets a Makeover and is Renamed Philadelphia Mills