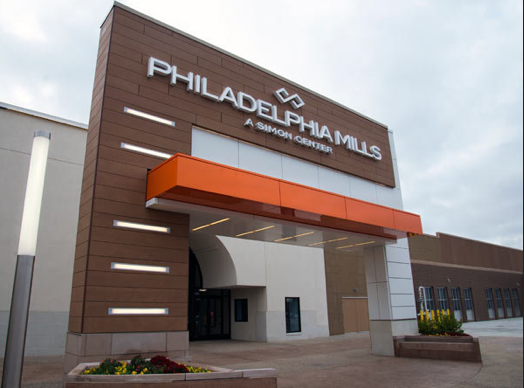 The city’s largest mall, is going through major changes.  Formally known as Franklin Mills, Philadelphia Mills is undergoing a mall makeover.  Some of the noticeable changes will definitely be noticed by shoppers as Neiman Marcus Last Call and Saks Fifth Avenue Off Fifth have been added while a brand new Walmart is currently in the works.

Although these changes seem like a good place to stop, Philadelphia Mills is going to continue its transformation throughout the coming years, including plans to add at least a dozen new stores.  One  of the upcoming additions will include the city’s first Express Factor Outlet.

If design and aesthetics are just as important to you, then it would be worth noting that Philadelphia Mills is undergoing cosmetic changes as well.  Some of the changes include new signage, new lighting, new skylights, floors, improved restrooms, landscaping, as well as WiFi and charging stations.

Having been around for 25 years, the newly named Philadelphia Mills is under the management of Indianapolis based Simon Property Group.  If their name rings a bell it’s because Simon Property also manages the the East Coast’s largest mall King of Prussia as well as the Limerick Premium Outlets, Gloucester Premium Outlets, and  Oxford Valley Mall.

Philadelphia Mill’s transformation will be interesting to observe to see if the new branding efforts translate to more revenue.  Other area malls such as Center City’s Gallery are in dire need of makeovers and just may be taking notes.