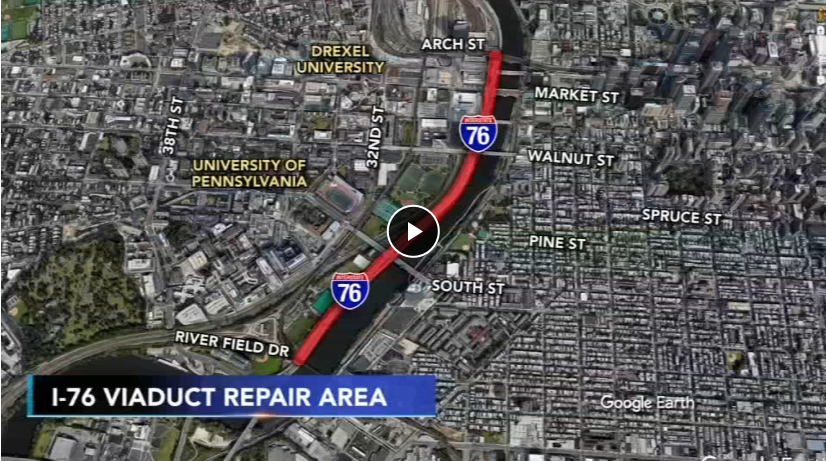 PennDOT Plans Several Lane Closures Over the Next Two Years!

PennDOT Plans Several Lane Closures Over the Next Two Years!

Locals call it “The SureKill Expressway” and we tried to avoid it at all costs.  Now the dreaded commute will get even worse as PennDot plans several lane closures over the next two years!

This massive headache is all part of a $40 million construction project that is broken down to two phases.   The work begins Thursday April 4th and will last two agonizing years.

The first phase will consist of repairs to a 340-foot bridge that crosses Route 23 in Conshohocken. PennDot states estimates this project to take a year.

Then crews will start phase two, which is to repair the 6,000 ft. long I-76 viaduct which runs from the University Avenue Exit to I-676 junction. This project will take “two summers” as PennDot recently stated.

At a news conference Wednesday, PennDOT’s Chuck Davies said, “Both of these structures are presently on the low end of fair condition and we have to keep them from falling into poor condition.”

Everyday 130,000 motorists use the elevated expressway near 30th St. Station.  For those traveling eastbound during the first phase, expect to see single lane traffic weekday nights and weekend days.  This will flipflop next year.

The biggest concerns for traffic will come starting in June when crews will shut down all eastbound lanes along nearby ramps during night time hours. This will continue for 10 weekends. The exact days for these shutdowns were not disclosed.

PennDOT’s district executive for this area, Ken McClain, is urging drivers to find detours and alternate routs to reduce congestion.  He stated “We would just encourage people that if they don’t have to use the Schuylkill Expressway during the construction to please avoid it at all costs.”

Continue Reading
You may also like...
Related Topics:construction, pennDOT, schulykill