Developers are Pushing for a Mixed-Use Building on Race St. - Wooder Ice 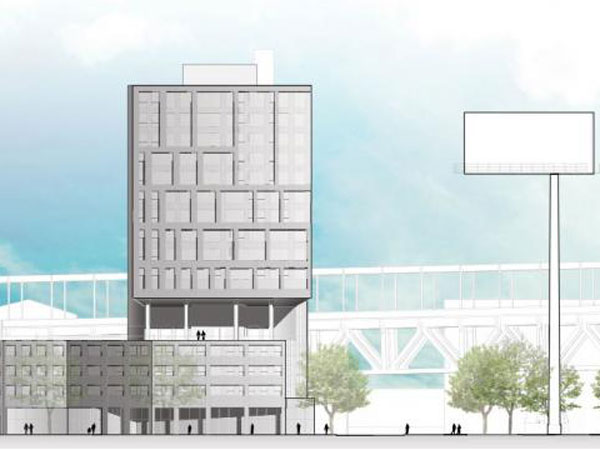 Feature Image is a rendering by Peter Gluck & Partners

Brown Hill Development which is headed by Jeffrey Brown and Greg Hill, is pushing for the construction of a mixed use building on 2nd and Race St.  However, this is their third push to get their plans off the ground.  The last time they introduced their plans it was shot down by neighbors and owners of a near by billboard which felt it would be obstructed.

Brown Hill’s plan is for a mixed-use building with 148 rental units and 14, 000 sq. ft. of commercial space.  The building will also have room for 28 parking spaces and 51 bike parking space.  In an effort to make sure that the third time is the charm the new renderings for the building were altered to reduce the obstruction of the billboard (which is shown in the new renderings) as well appeasing the neighbors by making the units more affordable and keeping with the median income of the area,  According to reports the units are projected to be affordable for those making approximately $44K a year.

Brown Hill has already applied for a permit in which the Historical Commission’s architecture committee will be able to review this coming Tuesday.  We will keep you updated as this story progresses.