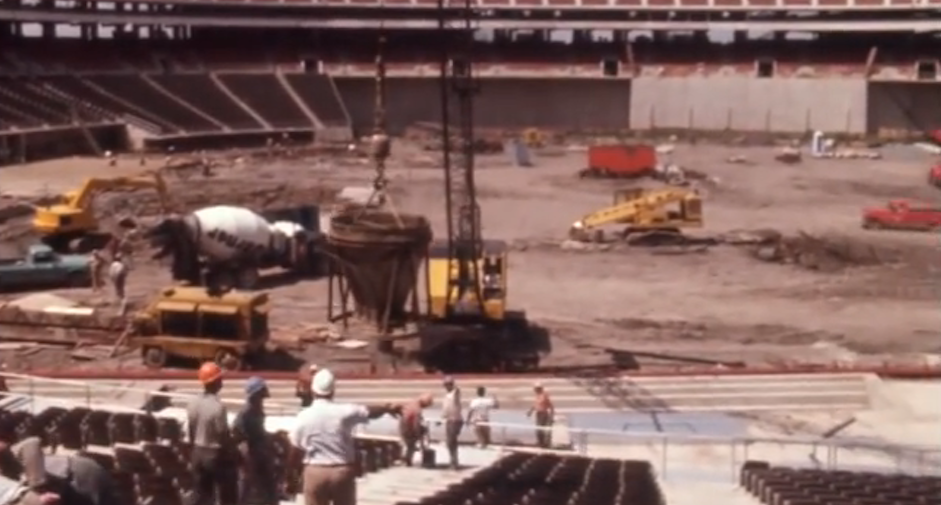 In an attempt to give Philly residents a cool glimpse of Philly’s past The Philadelphia City Archives has been posting vintage videos of Philly.  Although many of the films have not been dated it is believed that the new found videos were made between the 1950’s through the 80’s.  All-in-all there are about 150 videos posted so far on the the Philadelphia Dept. of Records YouTube channel.

Philly sports fans will definitely get a kick out one in particular video which shows the construction of Veteran’s Stadium.  Known for its infamous 700 Level and courthouse, The Vet was home to some of Philly’s most memorable sports moments.  Both the Phillies and the Eagles produced fond memories that are talked about to this day such as clinching the 1980 World Series, The Body Bag Game, and The Fog Bowl. With so memorable events that took place at The Vet, it comes as no surprise that there’s a book reflecting on the greatest moments entitled Veteran’s Stadium Field of Dreams.

Although no exact date is given for the video above, ground was broken on October 2, 1967 and the first game ever played was on April 10, 1971 against the Montreal Expos.  In a decisive fashion the Phillies pulled-off a 4-1.  As for the last game, that was played on September 28, 2003 by the Philadelphia Phillies.  Unfortunately the Phills lost 5-2 against the Atlanta Braves.  The final farewell came on March 21, 2004 when a demolition crew tore down The Vet.  However, the memories of this once hallowed ground will forever be etched in the minds of every Philly fan that was around during its glory years.