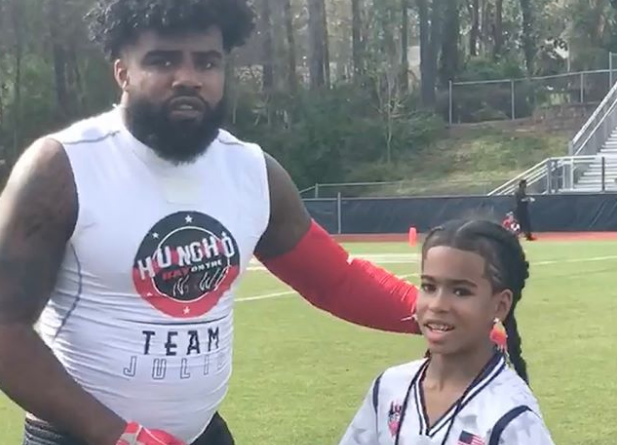 Got to meet my favorite running back @ezekielelliott Thank you #CowboyNation BIG S/O to my auntie @lisadotson for making this all happen for me/us today.

So I was perusing my I.G time line in my Eagles championship t-shirt when I came across an alarming yet satisfying photo.  At first I couldn’t exactly put my finger on this familiar face, but the tight belly shirt was a dead giveaway.  Yep, it was an out of shape Ezekiel Eliot taking a photo with a young fan.

The photo was recently taken during a celebrity flag photo game hosted by The Migo’s Quavo as part of his bday festivities.  The event included a gang of in-shape NFL ballers including Josh Norman, Julio Jones, A.J Green, and Von Miller.  However, the the Charles Barkley figured Ezekiel definitely stood out among his peers.  Yes, it’s only April but the off-season is where champions are made.  Bleedinggreennation.com broke a story of Eagles players in mid-season workout form immediately after the Super Bowl win (see article here).

Well whatever Ezekiel’s bulking routine he is currently on, we hope he keeps it up.  We wouldn’t be surprised if we hear about him being victorious in the fried Oreo eating content at the Texas State Fair.  In fact we’d love to hear Adam Schefter give an update during training camp that Ezekial Elliot officially made the switch to left guard.  No other outlets have reported on Elliots weight since the photos surfaced but if he doesn’t slim down by OTAs, this will definitely be a hot topic of discussion.  So for any fantasy players out there, we suggest you hold off until Zeke is able to throw on his normal size belly shirts.