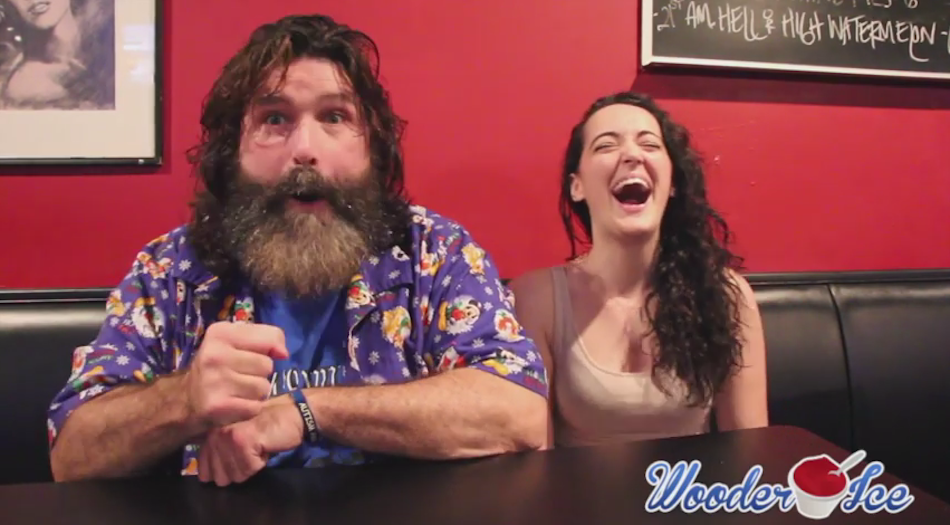 No matter what sporting event or show they attend, Philly fans are not shy when it comes to cheers and jeers. In a city that prides itself in blue collar work ethics those who always give 100% day in and day out are usually the recipients of cheers  When it comes to wrestling Mick Foley fits the bill of they type of figure Philly embraces with open arms. 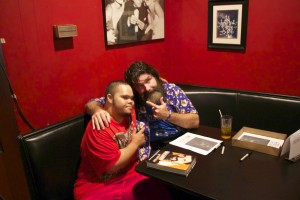 Mick Foley poses for a picture with a fan

Although he was born in Indiana and raised in Long Island, Mick has plenty of ties to Philly. Most may remember his cheating fiasco during this past year’s Wing Bowl competition but his roots in Philly run deeper.  In fact Mick Foley was a star in the now defunct Philadelphia based Extreme Championship Wrestling which was also known as ECW.  Spending a considerable amount of time in Philly Mick Foley learned how to win a crowd even if it meant sacrificing his body in the process.  Known for gory fights and gut checking stunts, Mick is no stranger to laying it all on the line.

But lets not go overboard with the image of being a total badass because beloved figures in this town also tend to show a soft side.  With a soft spot for kids, Christmas and of course his fans you’d be hard pressed to meet a nicer super star.  So when Wooder Ice had the opportunity to sit down with Mick Foley during his meet & greet at The Las Vegas Lounge, we jumped at the chance. We previously interviewed the director Tommy Avallone of the I Am Santa movie which Mick Foley starred in.  Therefor, it was only right we talk to Santa’s ambassador himself.

We wanted to know a few tidbits about his wrestling days but we were more interested in Mick’s life outside of the ring.  What’s up with his stand-up gigs? Does he have a room in his house with Christmas decorations all-year-round? Where does he go to get a cheesesteak when in town? Well if you want to get to know Mick Foley a little more, then check out our interview and see one of the faces of Foley you never got to see!

For those looking for an opportunity to see Mick Foley live he will be at the Helium Comedy Club Aug. 19th!

The Philadelphia Latino Film Festival Kicks-Off Today
Pelago Pop Up: Keepin’ It Fresh is a Pop-up Dinner You Won’t Want to Miss!