When most people think of Philly sports they automatically think Eagles, Phillies, Flyers, and sometimes the 6ers.  However, Philly’s first love is and will always be boxing.  Philly’s boxing history is littered with prize fighters and world champions that never got to see a ticker tape parade down Broad St. like the one the 08′ Phillies received. Many of Philly’s prize fighters have gone on to become  forgotten heroes. In fact a statue of Joe Frazier is not slated to be unveiled until later this year, a good 20 years too late by most boxing fan’s account.  So lets cast aside the fictional Rocky movies and look at the reality of Philly boxing and you’ll see names like Sonny Liston, Smokin’ Joe Frazier (mentioned above), Bernard Hopkins, and more recently Danny Garcia. 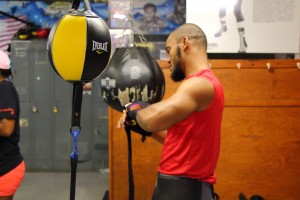 Philly’s reputation of being a blue collar, hard-nosed town is worn like a badge of honor among most Philadelphians and the boxers of Philly epitomize that very reputation every time they step into the squared circle.  Case in point, Julian “J-Rock” Williams.  Dubbed the next great thing to come out of Philly, Julian has been quietly building up a stellar professional career.  Currently 16-0 as a Junior Middleweight, he has not only been beating his opponents, he’s been demolishing them.  With 10 KO’s under his belt the boxing world is starting to take notice.  His most recent bout took place in Montreal against Michael Medina on Showtime.  The fight eventually ended with a devastating eighth round knockout,  maintaining Williams’ perfect record.

Being boxing fans we had to catch up with this rising star and what better place to chop it up with J-Rock than the gym.  However, this isn’t just any old gym, we’re talking James Shuler Memorial Gym, one of Philadelphia boxing’s hallowed grounds.  The BleacherReport.com has done feature stories of this renowned gym stating, “When you write about James Shuler Memorial Boxing Gym and its boxers your words need to be golden, each word needs to be carefully thought out each word must be crisp and precise. Most of all your thoughts need to have passion and desire, you need to be dedicated to your story and be able demonstrate commitment.”

Located in heart of West Philly we arrived at James Shuler Gym Memorial gym, where greats such as Jolting Jeff Chandler, Bernard Hopkins,  Bob Montgomery, and  Tim Witherspoon have all trained.  It was pretty much what I imagined it to be, a no frills, no nonsense gym.  You’d walk by the entrance if you didn’t know it was there.  Arriving around 9 pm on a sweltering summer night, we quickly exchanged pleasantries with J-Rock’s trainer Stephen “Bread Man” Edwards who has trained Williams since he turned pro in 2010.  Edwards is a well respected trainer with a high boxing IQ that Julian has been soaking up since their pairing.  When he isn’t training Julian, Edwards also shares his knowledge of boxing on BoxingTalk.com, where he is a featured columnist.

Not wanting to hold up Julian’s training we quickly set-up shop and got down to business with the interview.  Besides we were not built for the sweat box the gym becomes on such a hot night.  If it was 90 outside it had to be 100 inside.  Nonetheless, I am sure the trainers and fighters would have it no other way.  With a quiet yet confident demeanor J-Rock had no qualms talking to us about boxing and how he got started, “I used to street fight a lot when I was a kid, and one day I seen this guy running down the street and I asked him what he was running for.  He told me he was a boxer and he asked me if I wanted to go to the gym with him,” Julian recalls.  “I told him yea, he met me at the basketball court took me to the gym and I never left.”  A chance meeting sparked this young and up-and-coming fighter but his dedication turned that spark into a burning flame.

Julian quickly immersed himself into the boxing life.  Many people just see the glitz and glamor of a boxer’s life like Mayweather’s Instagram but not many people see the hard work and dedication these boxers have to endure for years.  Sure HBO’s 24/7 gave you a glimpse of some exercise routines. However, that’s just a fraction of what boxers go through on a daily basis.  As Julian describes his regimen, “It’s a whole lifestyle.  You have to eat, sleep, and really dedicate yourself to boxing.  You got to eat, sleep, and live it.” 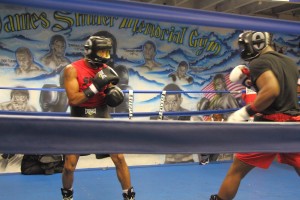 His unwavering dedication has led him to the forefront of challengers for a title shot.  His trainer Edwards is estimating his next bout to be in August meanwhile Williams estimates a title shot by first quarter of next year.  Either way Williams is on the fast track to the limelight.  “My goal is to be the Junior Middleweight champion of the world,” Williams states without hesitation.  If and when J-Rock reaches his goal his name would be etched in the rich history of Philly boxing.  That in itself would mean a lot to this 24 year old.  “Philly boxing history…first of all the history is great and you have to live up to it.  I am 16-0 and I have people saying I am the next great thing coming out of Philadelphia.”  However, Julian doesn’t see this hype as pressure but rather a sign that he is on the right path. “It’s not pressure but it lets me know people are watching.  I gotta live up to the hype,” Julian states confidently, almost as it were a simple driving test rather than a shot at the title.

Although he is dubbed the future of boxing by many, Julian is quick to give a nod to his fellow Philly fighters and firmly believes the current state of Philly boxing is as strong as ever. “Oh my God, It is extremely strong.  Anytime you have Philadelphia fighters, fighting on major networks all through the summer, you know Bryant Jennings, me, Jessie Hart, Karl Dargan.  I mean those are the fighters that are more than likely going to win a title in the next 2-3 years,” J-Rock boasts proudly.  His eyes widen as he rattled off the names but continued to state that the future of the boxing scene in Philadelphia will continue to get better. “Then you get all the young guys coming up like this kid right here [points to the ring behind him] Kyrone Davis and Stephen “Scooter” Fulton, it’s a deep pool.”

Boxing is obviously Julian’s calling to life.  He has adapted more than well to the rigorous lifestyle that professional boxers endure.  However, he also understands that boxing is also a platform that allows him to reach out to the youth and be an example that hard work pays off no matter what you choose to do in life.  Julian’s advice to the youth is pretty direct, “Whatever you want to do, you got to be dedicated because if you don’t dedicate yourself, there’s always someone behind you that is dedicating themselves.  For every opportunity you have to be prepared for it.  Opportunities are going to come but if you’re not prepared for them you won’t be able to take full advantage of them.”

It is safe to say that J-Rock has taken full advantage of every opportunity that came his way.  A hard working kid that has made a name for himself through hard work and dedication. As the interview drew to a close and the sweat beads started to trickle down my face, it was evident that this guy has something special to share with not only Philly, but the world.  “Philadelphia boxing history is great and I believe the future is going to be great,” J-Rock stated firmly.  Well if the future of boxing lies with this kid, within this gym, it’s safe to say that the sport is in great hands.