French Toast Bites Owner Becomes The First Black Female to Have Her Own Beer! - Wooder Ice 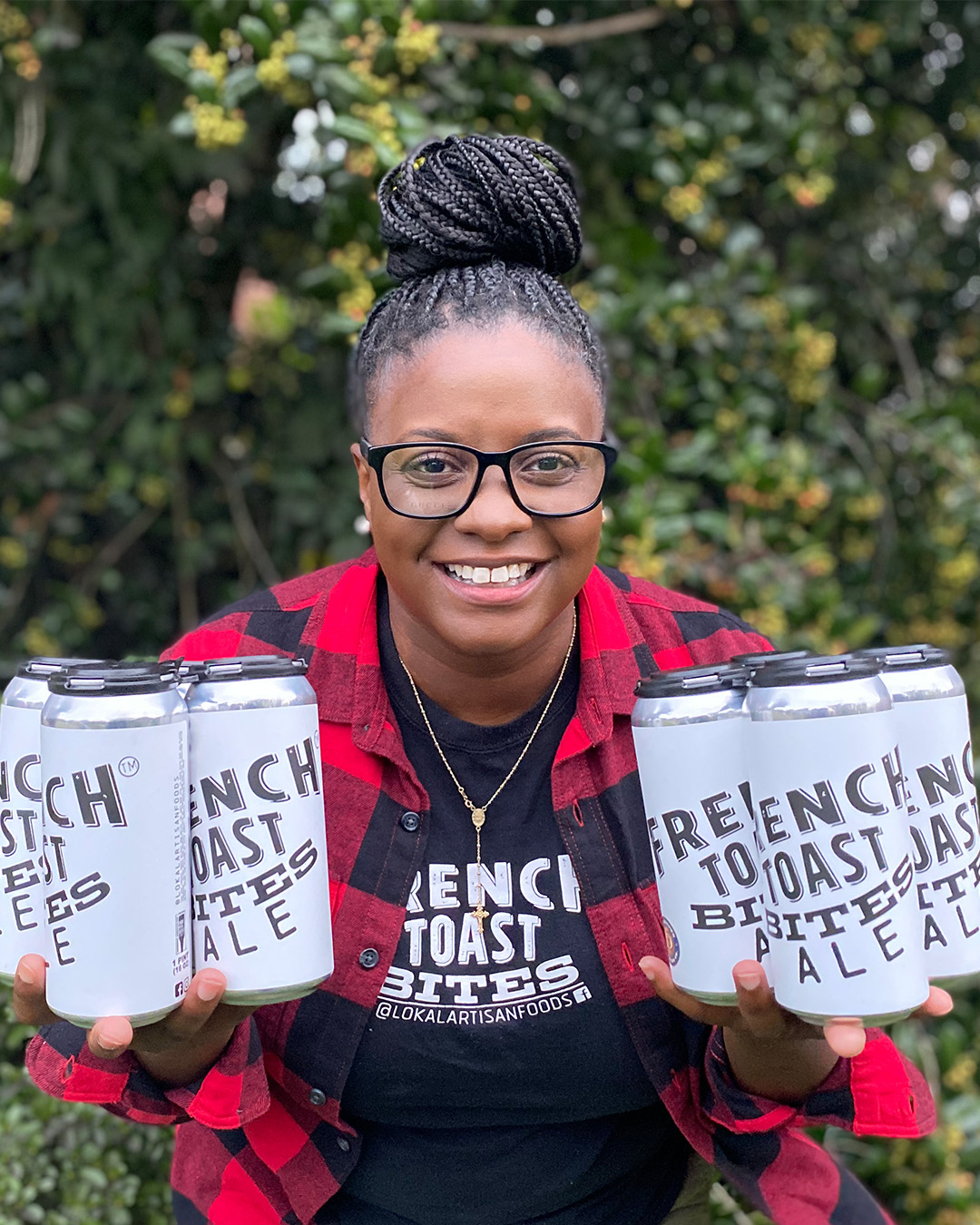 French Toast Bites Owner Becomes The First Black Female to Have Her Own Beer!

French Toast Bites Owner Becomes The First Black Female to Have Her Own Beer!

French Toast Bites by Lokal Artisan Foods announces the debut of the first-ever French Toast Bites Ale in partnership with Doylestown Brewing Company. The anytime ale is is 5.5% ABV and is a sweet, smooth and toasted dessert brew that pairs great with breakfast, brunch, dinner or dessert. It will be available in 16 ounce cans in four-packs, as well as in a limited run of kegs and sixtelles through distributor Muller, Inc. For McGill, the debut of the new beer makes her the first black female in the state of Pennsylvania with her own signature beer. The debut of the new beer is also part of the expansive pivot story for the black-owned, female-owned small and local business operating out of the Philadelphia market. From a devastating loss of special event income for her French Toast Bites business, to a major pivots and grand openings, and now to the debut of this beer, the entrepreneur is getting out of the box, getting creative, working hard and ensuring her success in a year filled with challenges for the hospitality business as a whole. In a huge unprecedented show of support for the local business, goPuff has acquired more than half of the initial shipment and will have it ready for immediate delivery today through the goPuff app, alongside other local iconic brands such as  Federal Donuts, Famous 4th Street Cookie Company and La Colombe.

“I am so excited to share news of my new French Toast Bites Ale in partnership with Doylestown Brewing Company,” said McGill. “I am a fighter, a dreamer and a doer. Getting out of the box and getting creative is what gets me up in the morning. I have long been curious about the beer business as I work with so many talented brewers and bars in my hospitality day to day life. Doing my own French Toast Bites Ale is a dream come true, and one of several big things happening this fall and into the winter. We all can’t sit around and hope to ride out the pandemic without investing the time, work, energy and passion. This is one of the largest pivots for me – and will shape the future direction of my company. I am excited and honored – and I can’t wait for everyone to try this special beer we have created!” 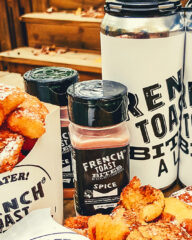 McGill, 38, is a Temple University alum, who attended the School of Sport, Tourism and Hospitality Management. She is one class away from graduating from St. Joseph’s Haub School of Business, with an MBA in Food Marketing. She is the former Director of Special Events at Valley Forge Military Academy. She also is known for being an expert in open-air economics and organized the highly successful Lansdale Farmers’ Market.

For the energetic and talented food entrepreneur, the launch of the new ale is the highlight of one of the most challenging years in modern history for the hospitality business. It is also the highlight of an exciting and challenging journey from quitting her full-time job and going into business for herself.

Just two years ago, McGill started her own business with money from her first investor, her daughter. Madison (then 12 years old, now 14 years old) hosted lemonade stands and put the proceeds into her Mom’s new business. Those lemons turned into literal and figurative lemonade when McGill headed to her first season at the Made in Philadelphia Market. Her French Toast Bites were a run-away, sold out success! With the funds raised there, she invested back into her business and exploded in 2019 with the debut of her retail version of her priority blend of French Toast Spice – “The Only French Toast Seasoning You Will Need.”

While she was securing shelf placement for the spice, she continued to expand throughout 2019 with more events and festivals, her debut at the Bronx Night Market, the launch of a summer-long pop-up at Piazza Pod Park, the launch of a pilot program with Shop Rite, her debut at Made in America, and a record-breaking return to Made in Philadelphia Holiday Market.

For 2020, McGill had big plans that included more and larger festivals and events, more short-and long term pop-ups, and exploration of a brick and mortar space. Then COVID19 hit and those plans fell apart like they did for many in the hospitality business. These plans really came to a devastating end when the Mayor announced this very week that events would be cancelled until February of 2021. That is an additional seven months of income and opportunity – and the joy of cooking – lost for McGill.

During the global crisis, McGill helped champion and became the first paid vendor on the Black-owned and operated Black and Mobile delivery service. She partnered with Better Box to share kitchen and cooking facilities to host pop-up sales via delivery and pick-up. She went on to be one of 60 people to win a grant from Black People Eats, she raised 100% of her goal through a community Kiva loan, and was awarded a Magic Johnson forgivable loans to minority owned businesses through Johnson’s EquiTrust Life Insurance Company. She also was awarded a grant from the PA 30 Day Fund.

While this year could have been devastating for McGill with all the events and festivals being erased from her books, McGill did as she always does and picked up, moved forward, put in the hard work and remained positive. That hard work and attitude paid off as she then made history as the first black female operator at Spruce Street Harbor Park. The buzz from the grand opening on the waterfront then led to a huge volume of increased business inquiries – including that magical call with Joe Movestine at Doylestown Brewing Company.

For the process, McGill fired up her signature French Toast Bites and headed to the brewery to collaborate and soak in every step of the brewing process. The end result is a sweet, smooth and toasted dessert brew that pairs great with breakfast, brunch, dinner or dessert.

“You have had our French Toast Bites at Made in America, Made in Philadelphia Holiday Market, Piazza Pod Park, South Street Spring Festival, East Passyunk Flavors of the Avenue and Spruce Street Harbor Park, now get ready to drink our signature spices and flavors too,” said McGill. “We made the beer with actual handmade bites – so that the final brew embodies the perfect balance of vanilla and our rich signature spice blend.”

While the call from Doylestown Brewing Company was a dream come true, that wasn’t the only life-changing call McGill would get after news of Spruce Street Harbor Park was announced earlier this year.

In an unprecedented move, goPuff contacted McGill for a partnership so they could bring the beer to market in an effort to support local and small businesses. goPuff will bring the beer immediately to market today, October 30th, through their app and platform. Lokal Artisan Foods will be featured alongside other local iconic brands such as  Federal Donuts, Famous 4th Street Cookie Company and La Colombe. The beer will be available in the Local Favorites, as well as the Beer tabs within the app. The beer will retail on goPuff for $13.49 for a four pack of 16 ounce cans.

“At goPuff, we are committed to working with and supporting local businesses in each of our communities – and this is especially true in Philadelphia, our home city,” said Rafael Ilishayev, goPuff co-founder and co-CEO.  “Because of this, partnering with Lokal Artisan Foods, a Black- and female-founded business in Philadelphia, aligns with our mission and we are so excited to work with Charisse to bring her new French Toast Beer to customers for the very first time.”

goPuff will have French Toast Bites Ale available for home-delivery through the app in the Philadelphia market to start. In addition to goPuff, French Toast Bites Ale will be distributed through Muller, Inc. distribution to local restaurants, bars and bottle shops in cans, kegs and sixtelles. McGill will have limited supplies of the cans at coming events this fall and into the winter.

After this launch, McGill has big things still in the works – as her 2020 story is only getting started. There are plans for new beers in the works and for the launch of another new product that could come to market by the end of 2020.

McGill is also heading for the first time ever to Love Park! For the 2020 holiday season, McGill will be part of Christmas Village in Philadelphia this year (vs. Made in Philadelphia Holiday Market). Follow the smell of sugar and spice, and everything nice, and find her in the Christmas Village food court. McGill will also pop-up in Northern Liberties for their special holiday season pop-up that starts immediately after Thanksgiving. (Details coming soon.)

The Barbary is Hosting a Drive Thru Halloween Experience “The Tunnel of Terror”
Snap Kitchen Closes Its Philadelphia Area Stores!