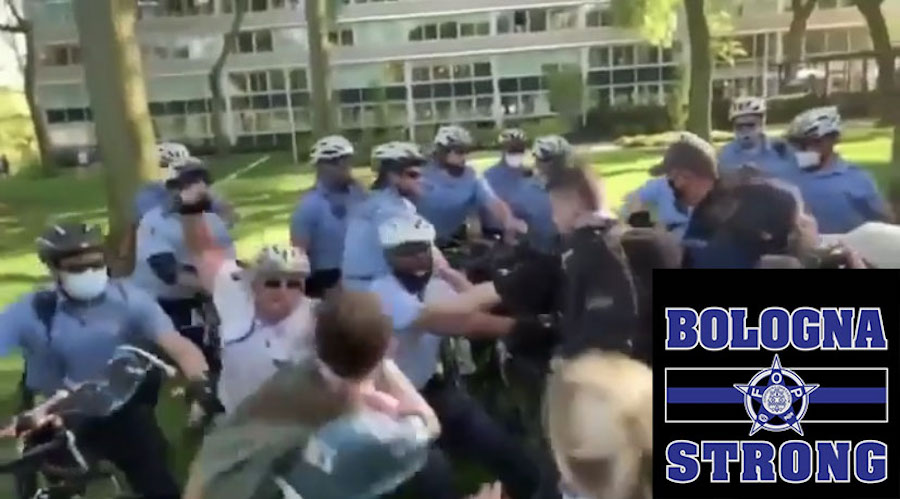 “This is exactly the problem that people have. Even when someone is wrong, and everyone knows it, rather than admit that they are wrong, you bunch up and put them ‘behind the blue line,” a person commented. “Only abusers support and protect abusers,” another commenter wrote.  These are the majority consensus regarding a controversial move by the Philadelphia FOP Lodge #5  to market shirts in support of Police Staff Inspector Joseph Bologna.

If the name doesn’t immediately ring a bell, he’s the cop facing assault charges for taking BP on Temple students and cracking a female student in the head.   The fact that it happened during the Black Lives Matter protest which condemned police brutality seemed to amplify the situation.  It didn’t help that he was welcomed with cheers and a round of applause by fellow cops as he surrendered to the 15th District.

Among his biggest supporters is FOP President John McNesby.  McNesby told the media that he was disgusted by the charges and added, “He never ever even came close to the head, it was shoulder strike, it’s what we are trained to do. The proper procedures were followed. Our guidelines were followed.”

However, there seems to be a divide in the blue wall as Police Commissioner Danielle Outlaw expressed her discontent with the video. “Some of the images are disturbing and depict behavior that does not appear to be in accord with our policies,”  Commissioner Outlaw stated.

Nonetheless the FOP Lodge #5 is slinging shirts in support of Inspector Bologna and it does look like there are folks interested.  “Can’t wait to get ours” “Can’t like this enough!!”  were just a few comments in support of the t-shirt sale.  The majority of the thread echoed the sentiments that the sale comes off as tone deaf and part of the problem.   See the video below.

Show your support for Inspector Joe Bologna 💙 T-Shirts will be available to buy in the cop shop on Tuesday, June 9th in sizes small to 3x for $20.00. Please Share!

Swipe Left ⬅️⬅️ . Here is Philadelphia Police Officer, Joe Bologna, brutally assaulting a protestor with a metal weapon. ⁣ ⁣ Caused a critical head injury.⁣ ⁣ Could’ve killed this person. . The third slide is of the #PhiladelphiaPoliceUnion & the local FOP, APPLAUDING and CHEERING Officer Joe Bologna — who was charged with the brutal assault of a protestor. ⁣ ⁣ His fellow officers see him as a hero. A martyr. ⁣ ⁣ Brutality is heroic to them. They don’t even hide it.⁣ Defund them. Dismantle them. And build something new!!!! It’s not working! ⁣ & Follow @GrassrootsLaw. #PhiladelphiaPolice #JoeBologna #OfficerJoeBologna #Philadelphia #endPolicebrutality #stoppolicebrutality #endracism #blacklivesmatters #justiceforgeorgefloyd #protests