The Balcony Bar at The Kimmel Center Returns For SIPS With Sweeping Views, Rotating DJs and Drink Specials - Wooder Ice 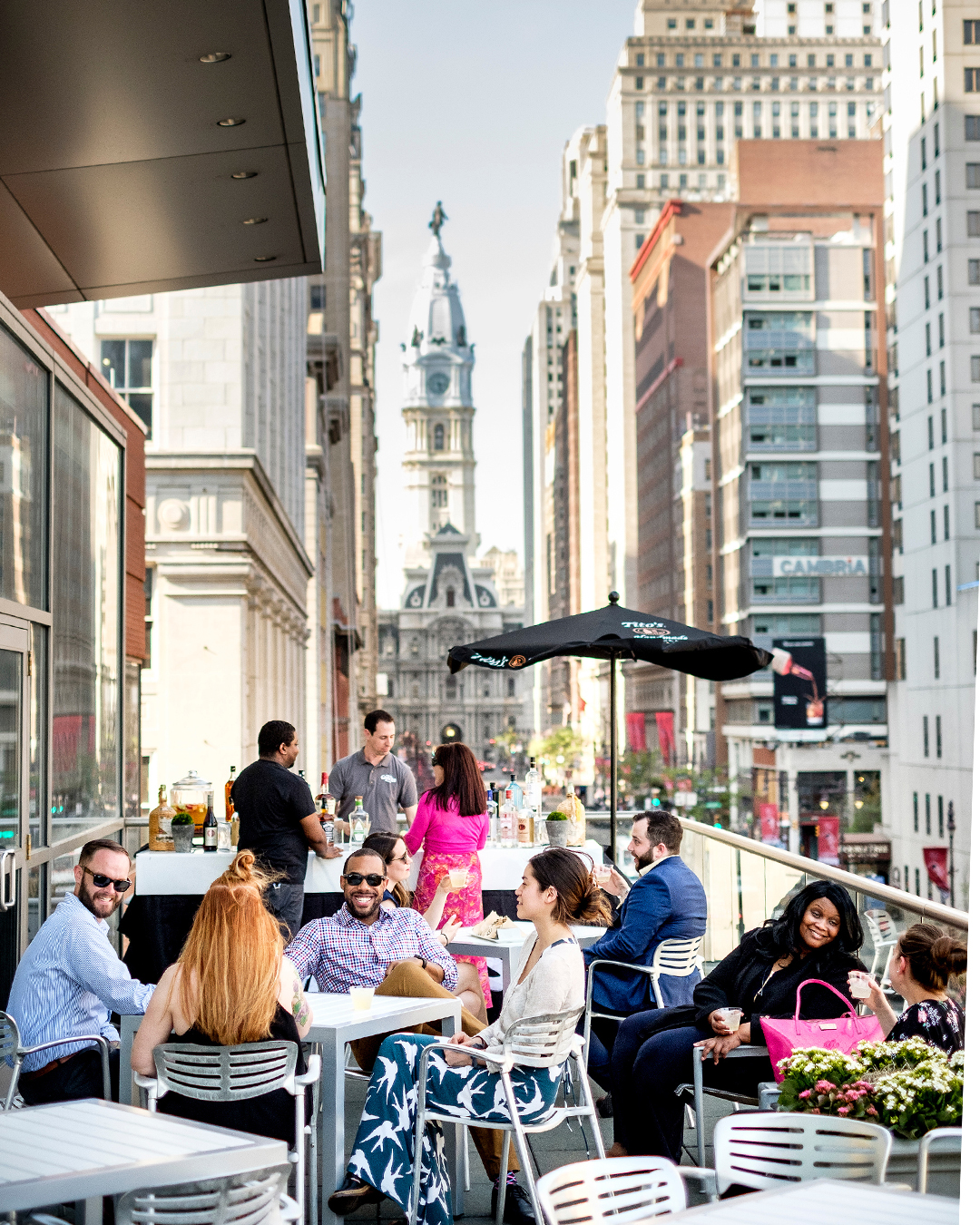 The Balcony Bar at The Kimmel Center Returns For SIPS With Sweeping Views, Rotating DJs and Drink Specials

The Kimmel Cultural Campus, Chef Jose Garces and Garces Events are pleased to announce the return of Balcony Bar at The Kimmel. Starting June 15th, The Balcony Bar will feature sweeping views each and every Wednesday, from 4:30pm to 7:00pm, for Center City SIPS. The pop-up space, located on the second-tier balcony of the Kimmel Center, overlooks iconic Broad Street and City Hall. Guests will enjoy some the city’s best views, plus beats from weekly rotating DJs, ticket giveaways, discounted drinks and happy hour bites. The Balcony Bar will offer up not just the vibes, but the best sips deals, with offerings priced between $4 and $6 each. Admission to The Balcony Bar is free, with food and drink pay-as-you-go. All food and drink are presented by Garces Events. After SIPS, guests can head downstairs to Volvér for 15% off their check when they mention Balcony Bar at The Kimmel.

“Balcony Bar is our official start to summer, the perfect excuse to enjoy good food and refreshing drinks with iconic Philadelphia views,” said The Philadelphia Orchestra and Kimmel Center, Inc. President and CEO Matías Tarnopolsky. “Alongside our partners at Center City SIPS and Garces Events, we’re curating a rotating lineup of DJs, once again making Broad Street the place to be for outdoor fun with friends.”

Chef Jose Garces said, “I can’t wait to have you all come chill out on the Balcony Bar at The Kimmel Center this summer. The Paloma specialty cocktail is one of my favorites to sip on while taking in the beautiful views of the Avenue of the Arts. There’s truly nothing that says summer more than the combination of Center City SIPS and those amazing city views.”

For the summer of 2022, The Balcony Bar will bring Center City SIPS to an all new level with stunning views high above Broad Street and the Avenue of the Arts. Guests should come ready with their phones charged and their SIPS fashion, as this is one of the best selfie spots in the entire city.

For food and drink, look for happy hour priced lite bites from Garces Events, plus discounted SIPS ranging from $4 to $6, plus a full bar and additional offerings. This year’s starter menu includes:

For the beats to set the vibe, look for a rotating line-up of DJS each week that read like a who’s who from the area nightlife scene. Confirmed DJs thus far include:

Linz & Mars spent his formative djing years in the bubbling deep-house and drum & bass scene of the late 90’s in Auckland, New Zealand. While spending time in Melbourne, London, Netherlands, and Thailand, djing in different cultures helped Linz hone his eclectic style, and evolve from his earlier purely electronic beginnings into mixes that transcend geography, genre and era. His sound resonates with global influences and creates joyous days & nights around Philadelphia with music from the past and present to create an atmosphere at once unique, but also curiously familiar.

RES’ musical journey has broadened in scope – she continues to produce, record and perform as an artist; is highly sought after as a global DJ/tastemaker curating music for national and international audiences; shares her knowledge on the college lecture circuit, being tapped by various universities as a music and cultural expert; and often serves as a moderator/panelist pushing the envelope on discourses related to the business of music.

Bobby Flowers fka DJ Lean Wit It is a diverse artist with a portfolio that includes music, theater and visual arts. He has shared stages with several international recording artists including Black Eyed Peas, Burna Boy, Ty Dolla Sign, Raekwon, Manny Fresh, Sango and Jazmine Sullivan. Bobby Flowers’ unique and infectious sound has been home to many popular venues around the world including Fela Kuti’s New Afrika Shrine. He has also been a community advocate for youth by providing mentorship in the Philadelphia area as well as Lagos, Nigeria. Blazing a trail of musical experimentation and collaborations has positioned Bobby Flowers on a path entering the global arena and setting it on fire.

Community motivates everything Philadelphia DJ, Rebel Foster, does — his artistry is galvanized by the idea music brings people together. His moniker is literal and speaks to his wide variety in styles, he’s known for switching up styles from house to hip-hop, trap to soul. With his hit party All the Cutz at the Blind Barber, he’s been capturing every party goers attention each month. Rebel Foster has been co-signed by major DJs in the industry, including Matthew Law, DJ Aktive, and Cosmo Baker, and has become a known name in the Philadelphia music community.”

Craig Dash is a DJ, poet, and educator based out of Philadelphia, PA. He is the Co-founder of Free Agents, a referral-based DJ, production and design team, and is a member of the Philadelphia chapter of the national Motown On Mondays party. He has collaborated on projects for Quentin Tarantino, Justin Timberlake, and Pharrell Williams, and holds a BA in Visual & Performing Arts from UMBC, and an MA in Education from Temple University. In 2002, the Baltimore native found himself sojourn in Los Angeles and becoming quickly familiar with a collective of artists, musicians, and lesser luminaries who frequented the storied Grand Star Jazz Club in the city’s Chinatown district. It was there, Dash notes, “that I learned a good bit about the commonalities of the human condition, and more importantly, how playing the “right” records can express that universally.” Over two decades later, Craig Dash has employed the same rhythmic sensibilities to distinguish himself as a DJ who offers audiences a shared sense of nostalgia, as well as a musical glimpse into new forms . Regardless of the venue, he subversively goes against the routine, improvising harmonic sets that draw from a broad scope of music history and theory. Relying more on the crowd to dictate the direction of an evening, Dash uses subtle themes to establish a mood that, at times, is as varied as the people that come out to hear him play. He has DJ’d alongside iconic Philadelphians such as King Britt, Rich Medina, Skeme Richards, and DJ Cash Money; as well as tastemakers like The Whooligan, Moonboots, Zimmer, Hot Chip, Digable Planets, and super producer, Prince Paul. In addition, he has served as the legendary hip hop duo, Camp Lo’s, show DJ. Craig Dash is without question, a selector who vehemently rebukes being pigeonholed to just one specific style, genre or taste.

DJ Mike Nyce is no newbie. He’s been rocking crowds for 20+ years. Being able to be diverse is where Mike’s talents are at their peak. He offers patrons and listeners a musical journey with an ease that some seem to stumble through. He’s shared sets with Dj’s Jazzy Jeff, Cash Money, Q-Tip, Dj Premier, Pete Rock, Questlove and more. He’s toured the country with Doug E Fresh and Biz Markie, has been the resident Dj for Philly’s infamous 12 year (weekly) party, Tastytreats, spun for Prince and his private afterparties and so much more. This is one Dj that you cannot go wrong with. From Hip-Hop to Reggae, Soul, Classics, Rock and more – this is one Dj that will definitely keep your party rockin’.

Internationally renown DJ & producer Cosmo Baker has entertained countless people around the globe over the course of his 30+ year career. A highly influential figure in Philadelphia music, Cosmo has worked with musical royalty: from Jay-Z to MF DOOM to The Roots, Drake to Madlib, N*E*R*D to Tame Impala, Janelle Monáe to Thundercat to Khruangbin, A-Trak to Z-Trip, DJ Premier to Diplo, Mark Ronson to Frankie Knuckles, and on and on… quite simply, Cosmo is a top tier, World Class DJ. A master of “open format”, Cosmo is acclaimed worldwide for his genre-spanning selection, technical skills and explosive stage presence and energy that he brings to shows. He’s known just as much for unearthing an older rare song as he is in breaking a fresh new one, and of course making them fit together. There’s nobody that moves the crowd like Cosmo.

Veteran to the scene & eclectic tastemaker, Francisco Collazo has been behind the scenes & on display at some of Philadelphia’s most legendary events. His love for soul & forward thinking music drives his selections as a DJ. A thoughtful technician, and an intelligent programmer. Francisco has garnered respect by some of the most demanding dance-floors.

Rising out of West Philadelphia, Nashirah is a selector who knows no boundaries. Starting out at a small family owned restaurant, Nashirah quickly worked her way up, securing resident spots as a resident DJ for some of the most prominent venues and bars in Philadelphia. Nashirah has founded popular events such as Beats and Babes and Interna$hional Bounce, building a reputation for playing uptempo music ranging from staccato club music to sounds of the African Diaspora.

Continue Reading
You may also like...
Related Topics:balcony at kimmel center, garces, rooftop bars, things to do in philly, Top Page Posts, volver