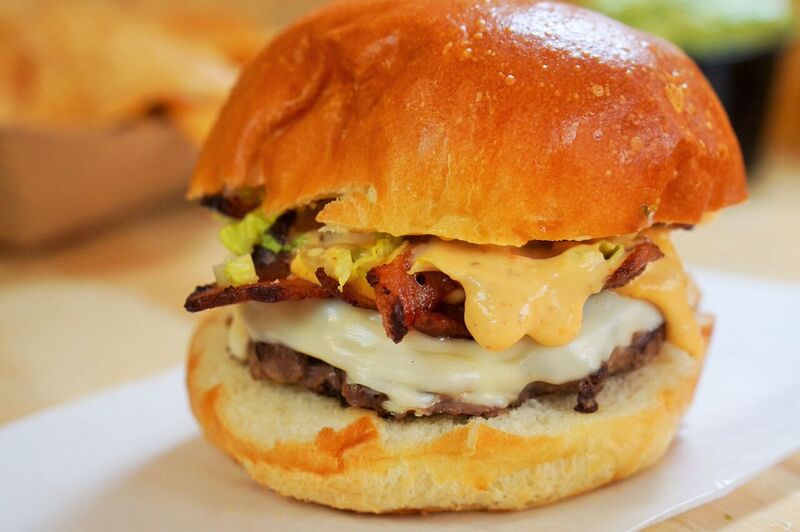 Can you keep a secret? Okay cool check it, Revolution Taco which is Rittenhouse’s latest trendy spot is offering a secret off-the-menu burger. The Revolution Burger will not appear on the menu or website, and will only be available by request at the counter. Only six will be made per day, and once they are sold that is it for the day.

The Revolution Burger is an Indian Ridge local dry-age beef blend of rib-eye and t-bone, topped with house bacon, with Cooper cheese, with roasted poblano crema and avocado chimichurri sauce. The bacon is made from Stryker Farms pork belly that is cured in-house with garlic and cascabel chilis. Served on a brioche roll from Breakin’ Bread Bakery. The burger will sell for $10.00 each.

The Revolution Burger was initially created on Street Food Philly food truck. Revolution Taco co-owner Michael Sultan wanted to bring one of the truck’s most popular dishes in-house as a tip of the hat to their mobile roots. The burger was a natural choice – not only as it is popular, but it also shows off the quality and creativity by the Revolution Taco/Street Food Philly kitchen team.
Down the road, look for the brick-and-mortar to preview and showcase new dishes coming from Street Food Philly, Say Cheese and Taco Mondo.
OTHER MENU CHANGES:
In addition to the Revolution Burger, Revolution Taco also announces some not-so-secret menu changes, like the new Three Little Pigs Taco – featuring pork shoulder, pork belly, house-made bacon and cumin seed jicama red onion slaw. Chorizo has also been added as an option for burritos and burrito bowls. Other new dishes will start to appear in March/April as the season changes.
So if you haven’t had a chance to check out Revolution Taco yet, you have plenty of incentive to do so now!
Continue Reading
You may also like...
Related Topics:revolution burger, revolution taco

Tandem Artist Bok Nero is Bold, Rare, Talented and About to Make His Mark
Nick’s in Old City Announces a New Name and New Menu Items Including BBQ!