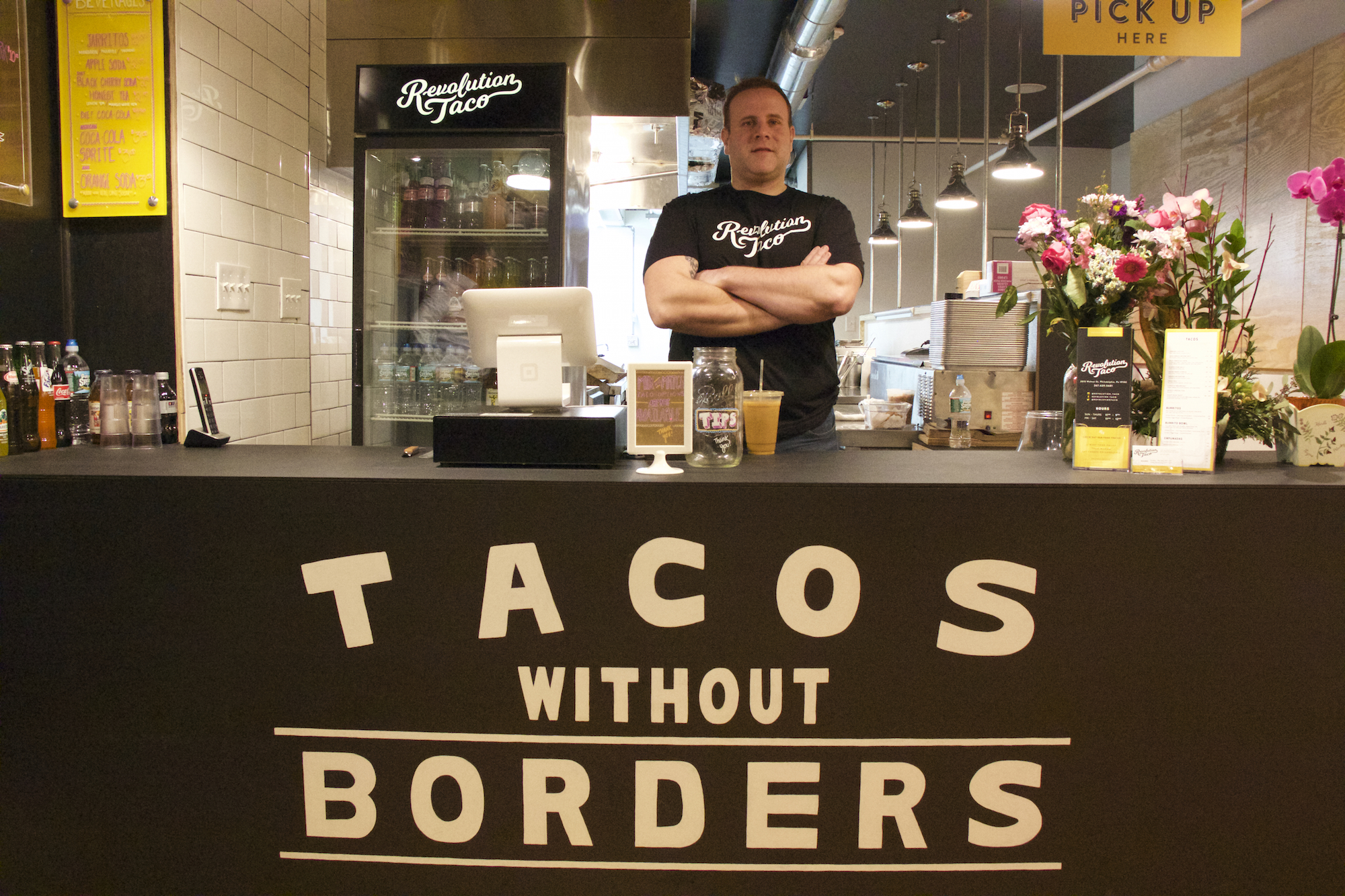 Quick, you are wandering center city and suddenly get a craving for tacos. Where do you go?

If nothing comes to mind right away, you’re not alone. Sure, there are a few established places like Lolita or El Vez or Jose Pistola’s. But those are sit-down restaurants not really geared toward grab-and-go customers. Dos Tacos in Rittenhouse is one of the few fast casual taco spots in the area and, while they do what they do quite well, one rub is that each order comes with only two (reasonably priced) tacos. 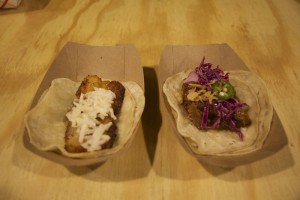 Enter Revolution Taco, the new counter-service storefront taqueria at 2015 Walnut Street operated by food truckers Mike Sultan and Carolyn Nguyen of Street Food Philly and Taco Mondo, and Alan Krawitz of Say Cheese. Get a peek at the menu here, and yes, customers have the option to select quantities of two or three tacos per order. Wooderice stopped by to preview the space – and, of course, sample the fare – ahead of last week’s grand opening. The menu is globally-inspired, and the food did not disappoint.

Upon entering, it’s hard not to notice the hot pepper wall, showcasing a variety of peppers the team has either grown, collected or had donated by industry colleagues and local foragers. You, the customer, can help fill the 120 spaces if you’ve got some weird peppers lying around at home.

*The ground beef tacos use Gold Angus beef, sourced from Indian Ridge Provisions in Telford, PA. Sultan and team wanted to use a local purveyor – noting that authentic Black Angus comes from Scotland – and the quality really shines through in every bite.

*The chipotle barbecue brisket taco is unlike anything you’ve ever had. The Revolution folks pickle their own ginger and jalapenos for the accompanying slaw, and that combination keeps you wanting another bite.

*The glazed pork belly tacos are tasty enough on their own merit. But the cumin seed lime jicama slaw brings them to a whole other level.

*Regretfully, your friends at Wooderice were too stuffed to sample the roast confit duck tacos by the time they came out of the kitchen. It comes in a scallion pancake shell with plum BBQ, ginger cabbage slaw, pickled oyster mushroom, and sesame.

*Vegans, don’t fret. The smoked mushroom tacos with avocado chimichurri and red cabbage were especially delectable, as were the fried tofu tacos with soy glaze, pickled veggies and tofu mayo.

Revolution Taco also offers burritos and burrito bowls as well as empanadas. Specials rotate weekly and feature an empanada option plus a seafood taco, such as grilled mako shark. At least for now, hours are 11 a.m. to 9 p.m. Sunday through Thursday and until midnight on Friday and Saturday.