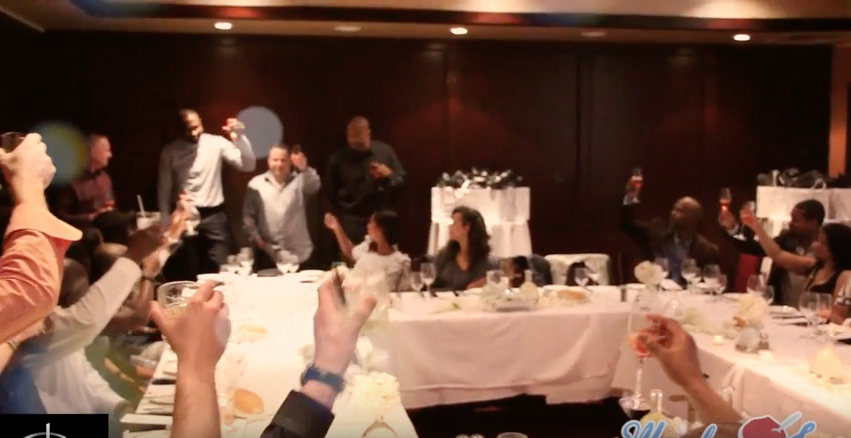 It was a meal fit for a king. 76er’s star Elton Brand recently held court last Saturday March 12th during his birthday party/dinner at the upscale steakhouse Del Frisco’s in Center City.  With 5 courses and what seemed like an endless flow of liquor, guests were treated to a dinning experience that would’ve broke the bank for the average Joe.

However, Brand’s friends at the hip cognac producer D’usse were there to not only pick up the tab but also create an unforgettable Bday soiree. It all took place at one of Del Frisco’s private dining rooms located in the lower level.  Guests were treated to rosé champagne as soon as they crossed the threshold.   The impressive glass enclosed wine cellar was definitely a jaw dropper and created an ultra chic ambiance.  As Bday attendees mingled, exchanged cards and contact information the Del Frisco’s crew began to prep for an assortment of entrees that were about to grace the fine china, including sea bass, ribeye and filet mignon .

Arriving fashionably late, Elton took his time to greet each guest individually for their attendance.  However, let’s be real here for a second.  I mean who could pass up a complimentary meal at Del Frisco’? I would reschedule a surprise birthday party for my own mother just the lobster mac alone. To showcase the versatility of their cognac, D’usse paired each course with a handcrafted cocktails.

D’usse which has gained tremendous visibility in the liquor market since its 2012 debut  with the help of music mogul Jay-Z.  The so called “new kid on the block” as gone on to align itself with some of the most popular names in entertainment.   In fact several influential folks within the music industry have gone on to become Brand Ambassadors including heavyweight promoter Mr. Rugs and Jay-Z’s right hand man Memphis Bleek.

So it comes as no surprise that dinner was accompanied with some of the hottest tracks in hip hop and r&b.  Guests were literally boppin’ their heads the entire time. It just seems like D’usse gets it.  The guests ranged from 20 somethings to 50 somethings and everyone yet this eclectic group was collectively engrossed by the ambiance.

Elton Brand did provide a short and sweet toast and thanked everyone for taking time out of their schedules to attend.  To the surprise of many, the dinner was crashed by Sixer teammate Jahlil Okafor who made a quick cameo.  The towering duo chatted for a bit and both seemed in very good spirits before Jahlil peaced out.  Since there was a bball player present and March Madness was in full effect, Elton and his sponsors for the night provided a large projection TV to broadcast the college games.

As things wined down and guests started to trickle out, Elton Brand and D’usse handed out partying gifts which included a bottle of D’usse and snifter.  Elton Brand being the gracious Bday host that he is, stayed until the very end and engaged every guest to ensure everyone was cool and we all had a great time.  Well speaking for myself, the dinner couldn’t have been more perfect and the drinks couldn’t have been tastier. I happen to be a tequila man myself but it looks like I’ve been converted to cognac, thanks D’usse and thank you Elton Brand for letting Wooder Ice be apart of your Bday celebration.