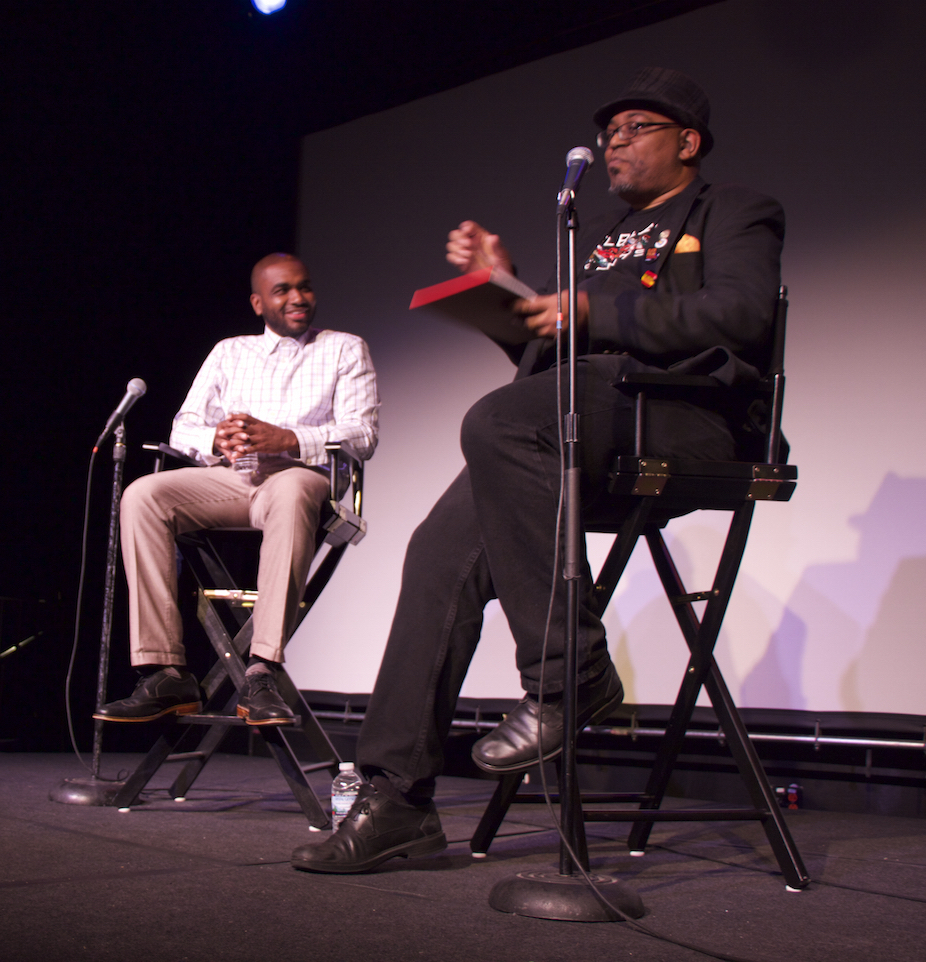 Gritty. Rough. Blue Collar. Rugged. These adjectives are usually the first things to roll off an outsider’s tongue when describing Philadelphia.  Although many of these descriptive words ring true, the insiders of this city see things a little different.  Sure we’re dubbed “The City of Brotherly Love,” but it’s a compound love.  The type of love where an older brother roughs up his younger sibling, not out of spite but to toughen them up to become resilient and un-wavered by outside forces. That’s Philadelphia.  Sure things get tough in this hometown but it’s that hits we take in this city that molds our character.

This ideology may not be so easy to comprehend.  We recently caught up with writer and director Jamal Hill who conveys this type of love on the silver screen. In town at the Prince Theater for a one-on-one interview sponsored by Reel Black and the Greater Philadelphia Film Office, Hill was here to share his story and inspire those looking to find their calling in life no matter the arena.

Originally born in New York, Hill was essentially raised in Philadelphia.  At a young age Jamal was exposed to the harsh realities of Philadelphia’s unforgiving streets. By 21 Hill would go on to become an entrepreneur and open his own barber shop.  His skills brought in more than enough clientele to ride out this trade into a comfortable life.  However, the voice inside kept him aware that he was destined for something greater but he just couldn’t put a finger on it.

It took an acceptance speech from Denzel Washington for Jamal Hill to realize his calling.  No, Denzel did not speak to Hill directly but rather indirectly.  You see it was the first time an African American had won an Oscar.  It was right then and there Jamal knew he needed to lend his talents to the entertainment industry.

Like most wide-eyed dream chasers, Hill wanted to go for the glitz and glam of acting.  Besides it’s the most logical way to break into to Hollywood by most accounts.  Before long Jamal Hill was enrolled at a community college taking drama classes to hone his acting chops.  During this time Hill enrolled in a creative writing class.  It was here that his gift for crafting stories was discovered after his professor was left awestruck.

Jamal Hill now knew what he was destined to do.  The only thing he hadn’t fully figured out was how to achieve his dream.  Writing feverishly for years, he soon developed scripts.  First was Brotherly Love which would later become the center piece of his catalog. However, before Brotherly Love could be manifested onto the big screen, Jamal knew he had to get it popping on the small screen first.  Sort of like how a rapper needs to drop a mix-tape to create buzz before they can drop a studio album.  Same was the case here.

Money. Power. Respect would become Jamal Hill’s “mixtape.”  It become an instant street classic and created enough buzz to catch the eye of Philadelphia legend Charlie Mack.  Although Jamal had one of the hottest independent movies out, he was still looking for a gig to make ends meet.  While perusing Craiglist for a job at 3 am, the phone rang.  It was Charlie.  The two hit it off and Charlie then in turn introduced Jamal to none other than Will Smith. After a 2 year stint traveling the globe as Will Smith’s personal assistant, Jamal found himself back in Philadelphia after a writer’s strike brought Hollywood to a screeching halt.

With Brotherly Love still on the back burner, Charlie Mack got back into the picture to ignite the range to get the project cooking again. The steadfast duo was met with rejection after rejection.  Again, Jamal knew he had to drop another “mixtape.”  Charlie was on board for the stepping stone project and enlisted the services of local red-hot artist Meek Mill who at the time was only regionally successful but would prove to be the catalyst to the project.  From this “Streets” was born.

Sure enough Streets was a independent hit.  This time around Miss U-N-I-T-Y, Queen Latifah got on board and supplied funding for the project.  However, Charlie and Jamal weren’t in the clear just yet. The studios weren’t willing to sign-off unless a marketable actor was involved.

Luckily for Jamal and Charlie, their rolodex was teeming with valuable contacts.  This proved to be the difference as Keke Palmer signed onto the project and the rest as they say is history.

You would be inclined to say Jamal Hill has made it.  But to him the term “making it” is a facade.  In the finicky world of Hollywood you’re only as hot as your last project.  With a heat still emanating from his previous movie, Jamal is looking to keep his momentum going.  Currently working on several upcoming movies as well as a TV project, Jamal understands that none of this would have been made possible without the Philadelphia “tough” love that molded him as child.