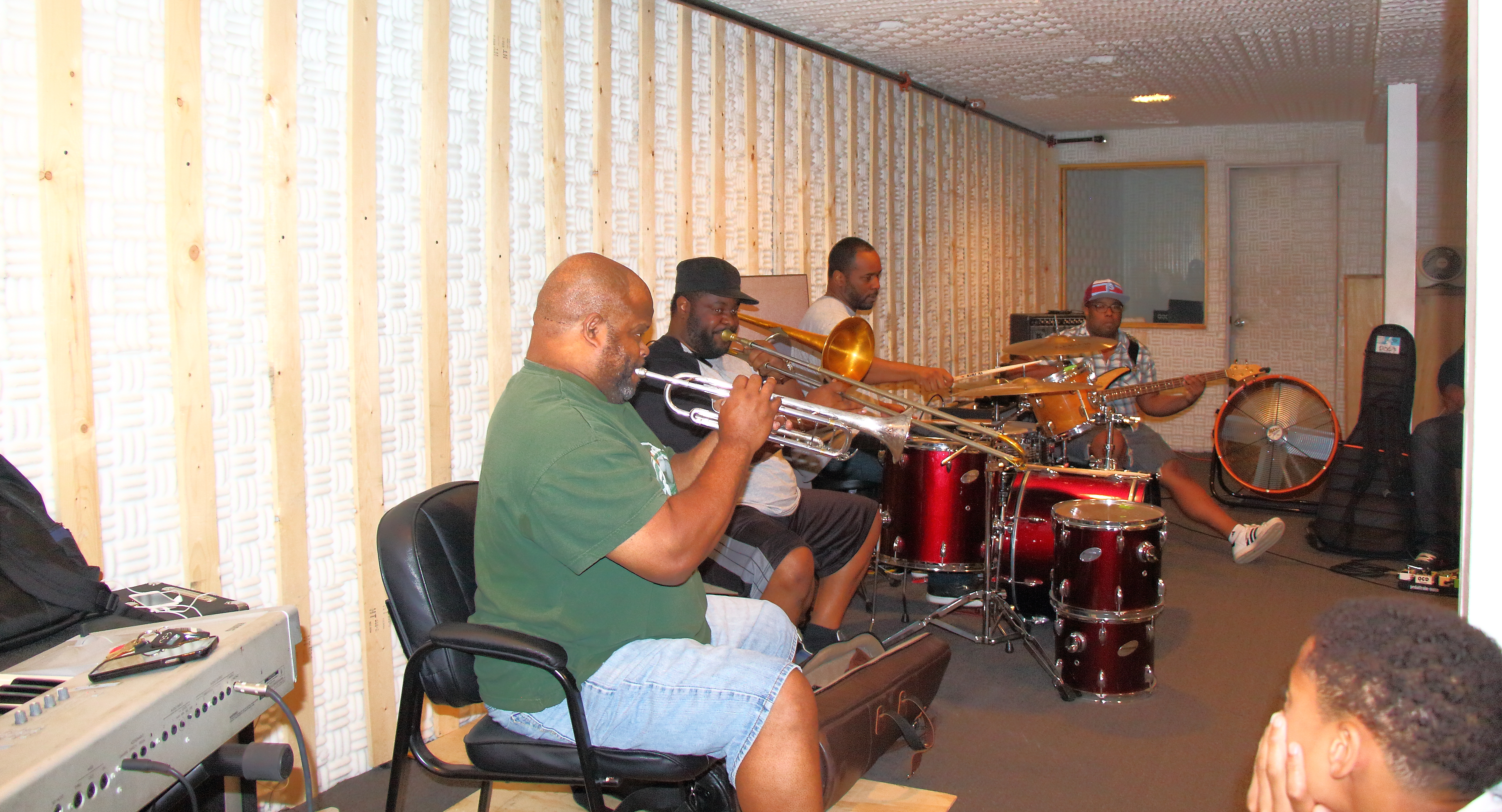 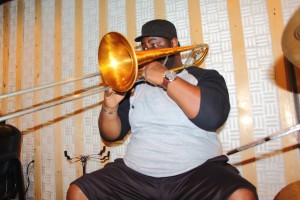 The term “hip-bop” probably doesn’t register with many people, even for those who are musically inclined.  However, a local band not only coined the phrase, but uses it to classify their unique style and sound.  Mozaic Flow is a nine piece Philly band that fuses just about every genre you can think of including hip-hop, jazz, bebop, blues, go-go, rock & roll, r&b, neo-soul, and funk. “Mozaic Flow is a multitude of styles put together,” states the band’s co-founder Jermaine Bryson.  He along with his brother Travien Bryson head an extremely talented cast of band-mates which include percussionist Dominque Thomas, Keyboard players Nate Coe and Jerry Tate, lead guitarist Harry Wilson, bass guitarist Elliott Garland, and trumpet player Brian Kilpatrick.

The Bryson brothers have been busy keeping their family name buzzing in the music business.  Their brother Damon Bryson also known as “Tuba Gooding Jr.” is a member of The Legendary Roots Crew, while Jermaine is currently the trombone player for the iconic Kool and the Gang, and Travien is making waves as both an instructor and an emerging drummer.  I caught up with these talented guys along with the rest of the band at the Candy Music Factory located in the historic Germantown section of the city.

As I sat in on their rehearsal for an upcoming gig I couldn’t help but bop my head and tap my foot as they ran through classic covers such as Kanye & Jay-Z’s “Otis,” D’Angelo’s “Brown Sugar,” as well as several classy jazz tunes.  Live music with real instruments is something that has been lacking as I looked back on concerts that I’ve attended.  Real instruments are now replicated by beat machines and synthesizers that sound engineers and producers tend to lean on heavily now-a-days.  However, there is no substitute for the real deal.

With the rehearsal coming to a close I finally got to sit down with Jermaine and Travien to pick their brain about the Philly music scene and their relationship with the Philadelphia community.  “Prior to graduating from Temple it was a big neo-soul scene.  We had Jill Scott, Vivian Green, Jaguar Wright,” Jermaine recalls.  “So many people that were part of the Philly scene and that whole neo-soul.  It kind of dropped off after everyone got big and moved away from Philly,” Jermaine added as he continued to describe the scene, “Coming out of college I didn’t want to follow the same trend.  I wanted to do something different.”  When listening to Mozaic Flow’s catalog, different in an understatement.  It’s hard to categorize a band that is so diverse and so eclectic, they pretty much created their own lane. 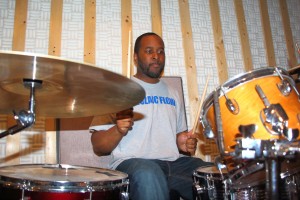 Having grown up in a musical household the Bryson brothers were heavily influenced by the musical selection of their parents, “I has heavily influenced by the jazz and bebop, world,” stated Jermaine as he reflected back on his childhood.  “My horizons and musical spectrum was broadened by my parents.  They gave me so many different types of influences such as Miles Davis, J.J Johnson, and Arturo Sandoval.”  Both Brothers also attribute a heavy dose of gospel music impacting their musical inclination while growing up.  Travien, the younger of the duo, attributes figures within the Philly community as influences in both music and life. “My influences started in South Philadelphia at Barratt Elementary. My music teacher had me on African drums then from there I progressed to marching band.”  Travien goes on to credit his his high school music teacher for steering him in the right direction of his dreams, “My music teacher Carl Mottola who has passed away, he stayed on me. [telling me] ‘you have to practice.’ If you want to be a master of your craft you have to continue to practice.” It seems that no matter what profession I interview someone in, practice seems to always be the common denominator in the formula of success.

Although practice is critical, having a good mentor is another key to a musician’s success.  However, if you have been keeping up with the latest developments regarding the closing of music programs throughout the Philadelphia School District, it doesn’t take a genius to figure out that mentors are diminishing every year.  The next great musician out of Philly can very well be deprived from the nurturing they need to succeed and be heard.  Recognizing this dilemma, Jermaine along with brothers Travien and Damon formed a non-profit organization called The Flow Foundation. “As musicians that are in the field, we wanted to do something to make up, or fill the gap and kind of bridge the gap.  I am getting blessed I want to bless someone else,” Jermaine explains.  Essentially The Flow Foundation is a 7 week program where the Bryson brothers go into local schools and provide free lessons, coaching, and training to up-and-coming musicians.  “We give back. We give back our time, we give concerts, we show kids the ropes, give them the business side as well as the music side.  Giving back and being a blessing and showing these kids there is a way out of the ghetto or a way out of their community.  Getting them from high school to college, we want to be that bridge.” Jermaine elaborates.

Helping the youth achieve their dream is way the Brysons choose to spend their free time because they know the trials and tribulations that these potential artists will face.  Many will be discouraged while others will endure the riggers of being a “struggling musician.” Jermaine made sure that point was driven home, “Starting off in this business is very hard.  I played in my basement for about 7-8 years without coming out, I practiced all the time.”   Although both brothers founded Mozaic Flows their lifestyles differ and reflect the stages and sacrifices that musicians have to make.  Jermaine has paid his dues over the course of the last decade and can now make music his full time gig.  Travien is still on the rise, however he’s very optimistic that soon he can say goodbye to his 9 to 5 and be a full time musician. In the meantime he represents up-and-coming musicians that are on the daily grind to balance both passion and life, “Well I do have a 9 to 5.  I am working to make music my full time passion.  I work 9 to 5 so I am there then I come home practice, practice some more and after practice I am on my way to a gig.  Sometimes I am up until 6 in the morning, only getting 4-5 hours of sleep.  It’s a continuous grind,” Travien expresses.

As Travien detailed the daily struggle that many musicians face, Jermaine explained how this process is a right of passage on the way to the top while recalling his own struggles in the music bizz, “It took me 10-12 years to get to this point.  There were a lot of hard times when I was eating Ramen Noodles, couldn’t figure out how I was going to pay my car note, where I was going to get money at for mortgage.”  But Jermaine stuck with his passion.  Although he was getting anywhere from $25 -$100 a show he persevered until those small gigs turned into bigger gigs. Eventually people started knocking at his door and before long he was playing alongside the likes of Jay-Z, Mos Def, Public Enemy, as well as his childhood heroes Earth, Wind, and Fire and Stevie Wonder.  “I don’t have a 9 to 5.  I am blessed to tour the world and do the things that I do without work, but that’s not everybody’s story.”  The cold hard truth is that not everyone will make it in the music industry but those who are talented enough and dedicate themselves will eventually rise to the top.  However, the hurdles during the ascension trips many people up but true passion and love of your craft will help you overcome those hurdles. They say love can’t pay bills. However, in this case love pays the bills when you get paid for what you love.

For More Information About The Flow Foundation:

For Mozaic Flow Bookings and Inquiries: