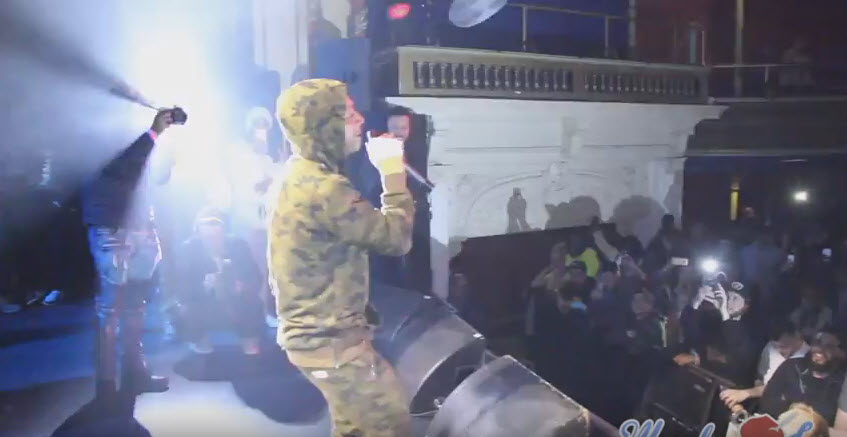 First and foremost our recap does not show the Kat Williams beat down so if you’re here for that keep moving along.  What it does show however are a bunch of talented artists performing great hip hop tracks.  Beanie Sigel’s Top Shotta concert which took place at The Trocadero March 6th may go down in history as the “Kat Williams incident” but let’s not let that take away from what really went down that night.  The show as a whole was dope to say the least.

Beanie who was also celebrating his bday brought out local talent Chill Moody to open up the show.  Chill who is the official Music Ambassador of Philadelphia is a polished artist with a string of great projects.  If you haven’t check out his stuff by now then you’re lunching.  He was the perfect artist to warm-up the crowd performing a few of his hits including his version of Mos Def’s Mathmatics.

As Chill got the crowd in a hip hop state of mind it was time for Chester’s own Jahlil Beats to bring things up a notch in terms of “the turn up.”  As the man behind club smash hit after club smash hit, Jahlil effortlessly ran down tracks that would have any club jumping.  No MC was needed for this segment as his bass, drums and signature sounds controlled this crowed and had everyone head nodding as if they were hearing the beats for the first time.  Jahlil’s set quickly transitioned to a Dave East showcase as the East Harlem native firmly left his impression felt for the Philly crowd.  The Nas affiliate still making his bones in the industry has developed a strong following but it’s always the Philly crowd that’s the toughest to win over.  Safe to say Dave East was welcomed with open arms in the City of Brotherly Love.

The positive vibes were definitely flowing through the venue as the crowd anticipated the city’s general Beanie Sigel to grace the stage.  However, for older hip hop fans such as myself it was going to be more than just Beanie showing face.  We’re talking sharing the stage with his former nemesis Jadakiss whom he shared a verbal exchange that will forever go down as one of the best rap beefs in the history of the game.  We’re talking countless barbershop arguments, best friends at odds and fragmenting social circles.  What most would be happy to call a draw these rap titans trading bars on the same song was something that many in the crowd waited decades to witness.

That anticipation quickly turned to be-wilderness as unannounced guest Kat Williams performed a bizarre impromptu performance that was mostly incoherent. Half the crowd was amused by this pint sized hip hop jester while the other were trying to process what their eyes were relaying to their brain.  Soon after Kat gave a decent intro for Beans and the show was back on track (for now).

Aside from the occasional awkward poses by Kat Williams in the background, Bean’s set was relatively uninterrupted which was definitely a crowd pleaser.  But it wasn’t long after Beans took a breather and passed the mic to his former label mates Young Gunz that Kat was back to his old tricks and steadily dodging in and out of the pathway of both performers.  What was perhaps the height of his unorthodox behavior came when Lil Mo was belting out her early 2000’s jams.  This is when Kat Williams became increasingly intrusive and literally stealing the show from Lil Mo’.

Looking to restore some order and close out the show, Beanie Sigel took over the ranks of master of ceremony has he rampaged through several of the hard hitting tracks that asserted himself as not only Philly’s Top Shotta but arguably the the best MC to ever sign on the Roc-A-Fella label not named Jay.  As a quick nod to local phenom Boone, Beans let him perform his red hot track “Pop A Perc,” which oddly enough had even Kat Williams dancing along.

With a charged up battery, the crowd finally got what they shelled $40 a pop to see.  Mr. Raspy aka Top 5 DOA emerged from the cluster of bloggers  and entourages that engulfed the stage. The duo quickly jumped into Reservoir Dogs which was probably played in everyone hip hop fan’s whip during those early 2000 summer nights.  Shit that track still bumps!

Breaking off into his own quick set Jada spit some classic Lox verses that catapulted him to the top tier of everyone’s list.  There was even a Lil Cease sighting that came near the end of the night.  Then came the moment that turned this relatively well ran show into a hub of media interest.  Out of no where Kat Williams charged a man on stage and lunged at him with a punch. Obviously mayhem ensued and the rest is TMZ history.

As a fan of hip hop the show was nothing less of great as old school meshed perfectly with new school in a seamless fashion.  Aside from the circus at the end the Top Shotta concert was definitely one for the record books.