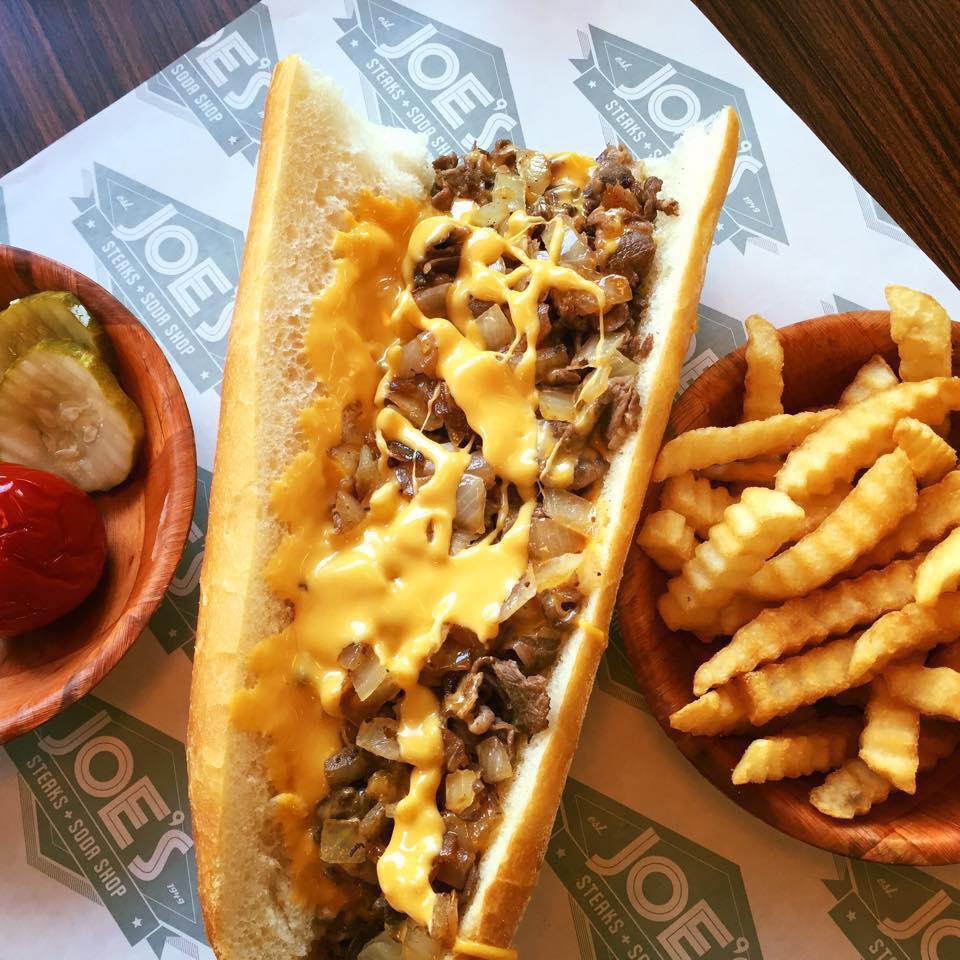 Joe’s Steaks is Allowing Lucky Customers to Pay 50 Cents for a Cheesesteak!

Joe’s Steaks is Allowing Lucky Customers to Pay 50 Cents for a Cheesesteak!

The popular Joe’s Steaks + Soda Shop has been celebrating its 70th anniversary all year long with cheesesteak and milkshake mashups every month featuring Philadelphia’s iconic foods. The celebration has included Owner, Joe Groh’s mouthwatering creations, such as the Cannoli Milkshake –combining his traditional vanilla shake with the world’s greatest cannolis (an undisputed and self-proclaimed fact) from Termini Brothers Bakery, as well as other Philly favorites such as the Kielbasa Cheeseteak featuring Czerw’s Kielbasy, and the surprisingly controversial (yet super delicious) Pound Cake Cheeseteak with Stock’s Bakery.
As if these combo’s weren’t enough of a public service, Groh will be extending the Septuagennial celebration throughout the month of May by giving away 70 golden tickets, awarding recipients with a large cheesesteak voucher redeemable at 1949 pricing — just fifty cents!
Beginning today, every purchase of a large cheesesteak at the Torresdale location throughout the anniversary month of May will go into the running for this Willy Wonka inspired competition. The 70 golden tickets will be awarded at random and patrons are encouraged to double check their cheesesteak wrappers before throwing them away! 🙂

Groh began working seven days a week at the restaurant in 1979, which opened in 1949, by hand slicing rib-eye and onions. He worked his way up to server, then onto the grill and eventually took over as grill master and owner when the original founder, and the restaurant’s former namesake Sam “Chink” Sherman, fell ill before passing away in 1997.

Philadelphians have been enjoying cheesesteaks made to order, hand-crafted sodas, milkshakes and egg creams since May 1949 at the 6030 Torresdale Avenue and in 2015, Joe opened a second location in Fishtown at the corner of Girard and Frankford Avenues, serving up the same, high-quality famed sandwich to a different customer base and late night crowds.
Continue Reading
You may also like...
Related Topics:cheesesteak, joe's steaks, Top Page Posts