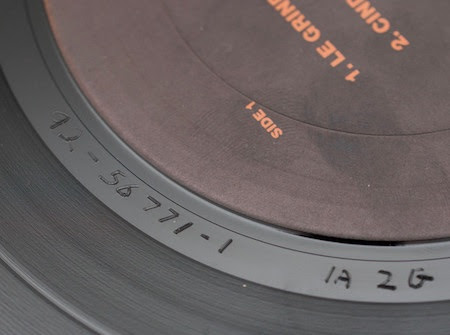 The discovery of a previously unknown original Canadian pressing of Prince’s The Black Album has been submitted to the Discogs Database. The discovery of this unique variation and the previous U.S. copies that surfaced were among some of the rarest records in the world. A U.S. variant of The Black Album sold via the Discogs Marketplace in April 2016 for $15,000 and more recently in February 2018 for a reported $42,000 via music historian and record dealer Jeff Gold of Recordmecca
Gold, a former Executive VP at Warner Bros Records who worked with Prince, made news in December last year upon surfacing five sealed copies of the U.S. variant of the Prince rarity. Gold states, “as word spread of the discovery of the five sealed copies, a former Canadian record pressing plant employee contacted me with his an unbelievable story of his own. In 1987 he was working at Columbia Records Canadian pressing plant in Canada. When The Black Album was pulled and the copies that had been made marked for destruction, he kept one copy for himself. He never realized its rarity or value until reading about the discovery of the U.S. copies in Rolling Stone and contacted me.” After considerable research and inspecting the album in person, Gold confirmed the authenticity of this ultra-rarity—the single Canadian variant of The Black Album known to exist. Based on the listing images in the Discogs Database, Discogs’ Discography Specialist, Brent Greissle believes it to be legitimate as well.
Gold has listed The Black Album in the Discogs Marketplace for $27,500 USD. Gold said “I’d sold the others through my website, and wanted to offer this copy to the larger record collector community, and I think the best way to reach them is through Discogs—a site I’ve been using more and more, both to sell records and research releases. The information on Discogs is remarkable, and I was glad to be able to list something previously unknown on it.”
Scheduled for release by Warner Bros. Records on December 8, 1987, Prince canceled The Black Album one week before its release date, and subsequently, more than 500,000 copies were destroyed. Only 8 U.S. original vinyl copies have surfaced in the 30 years since… and now a single Canadian copy surfaces.
Continue Reading
You may also like...
Related Topics:black album, prince

Neef Buck Discusses the Key to His Longevity and if There Will Be a State Property Reunion!
Heineken Green Room Announces Mozzy and Kur for June! Get the Scoop!