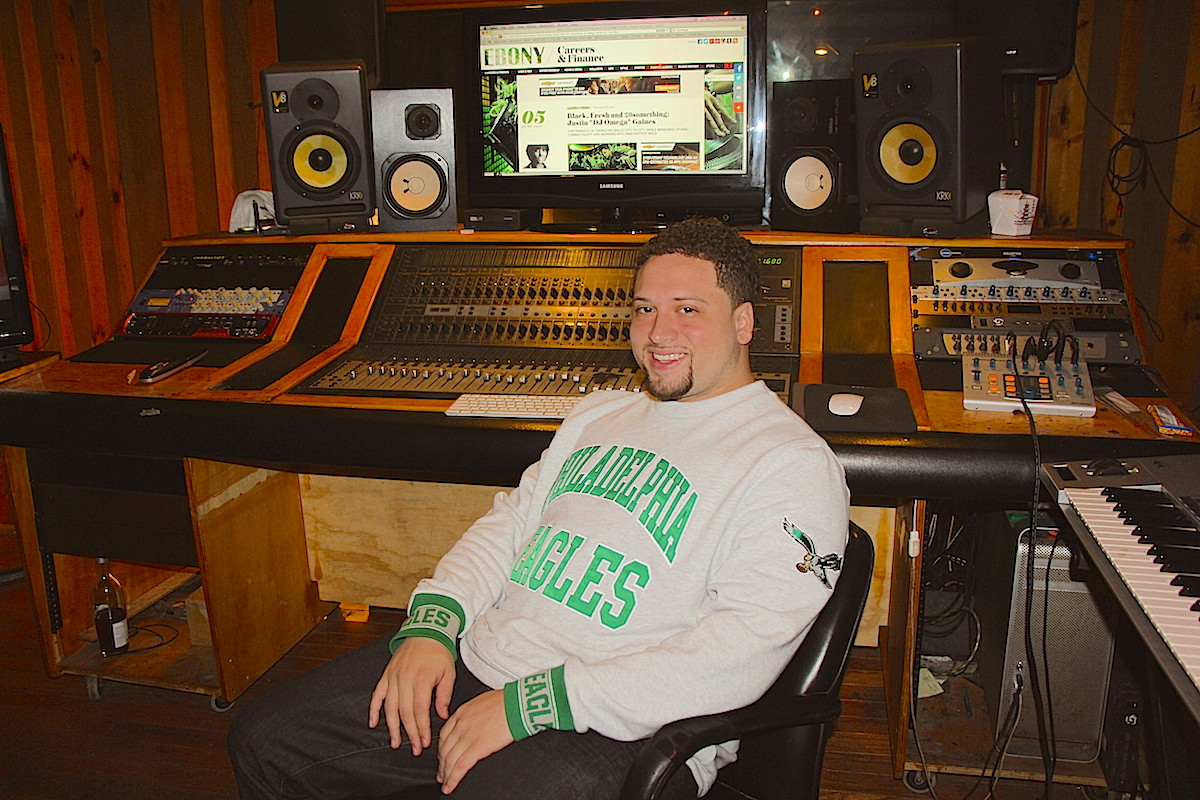 When it comes to the world of DJing, Philly has made significant contributions from some of the industry’s biggest names such Jazzy Jeff, Drama, and old school legend Cash Money.  However, in more recent years few DJs have been making international waves while still calling Philly their home base.  While most DJs that make it big tend to move to music hubs such as New York, Miami, and Atlanta, one local DJ has maintained Philadelphia and South Jersey region as their home. Meet DJ Omega, a local DJ that has managed to be successful in just about every phase of media while staying true to his roots. 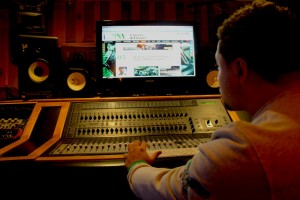 DJ Omega is on the boards at E.R studios

I’ve had the pleasure of knowing Omega for some time.  Having gone to Temple University together I got to experience first hand the grind and growth of this rising talent.  Having positioned himself as the top DJ working the college party circuit in the early 2000’s, Omega quickly found himself showcasing his talents on Philly radio station Power 99.  However, it was years of dedication to his craft that paved the way for such a life changing opportunity.

As we sat down for the interview at his E.R Studio (444 N. 3rd St.) it was quickly apparent that this guy makes the most of everything that comes his way.  He obviously has come a long way since his campus parties at Mcgonigle Hall.  Since graduating Omega has hosted TV morning shows, toured with some of hip hop’s biggest names, and even worked on a project with comedic legend Jerry Seinfeld. Although we were quite familiar with each other, there was still so much I was interested in knowing.  As he nestled into the over sized black leather couch in his studio (these things are a staple in every studio apparently) we quickly jumped right into the interview.  Obviously there was a lot to talk about.

First things first, we start from the beginning and how Omega found himself behind the turntables. “Actually my cousin and aunt were DJs, so I grew up around them.  They’d do little gigs like house parties, weddings, and stuff and I just picked up on game.” It didn’t take long before young Omega was hounding his parents for his very own set of turntables and mixer.  At the age of 12 he finally got the Christmas present he was long hopping for and from there “it was on,” as Omega states.

By the time he reached college DJ Omega had already created a buzz for himself in the Philly region.  Many party promoters and local acts were familiar and it didn’t take long for his name to grace the fliers of just about every big event in the city.  Eventually his knack for rocking parties landed him an on air gig with Power 99.  While many DJs would’ve been content with such a milestone, DJ Omega eventually parlayed his radio gig into a TV gig. “I used to do NBC morning show for about 3 years everyday. The way that came about I was working for local radio station Clear Channel Power 99 and I got a call one day to see if I would be a guest DJ on this show called The 10 Show.  It was a lifestyle, entertainment show that aired everyday.”   As Omega continued to recall how this opportunity came about it was motivational to know this was still not the pinnacle of his career. “I did it [the show] rocked out then the VP of news that controlled the whole station came down and was like ‘You’re great can you come every day?’ ” Omega recalls.  From that day forward DJ Omega was officially an on air personality.

Being the consummate mover and shaker he is, DJ Omega was on air but still looking for the next big thing.  With several guest spots on BET’s flagship show 106 & Park as both a guest DJ and judge for Freestyle Friday, the Omega brand was gaining momentum.  Not only was he locking in the corporate world by endearing the audiences from The 10 Show but he was still keeping his coolness on the street level.  His buzz eventually landed him the opportunity to be the tour DJ for Wale, a DC rapper who was prominent on the rap scene when Omega signed on. 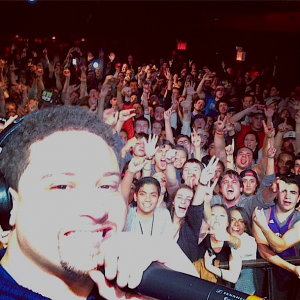 Omega rocks the crowd while on tour

As DJ Omega continued to recant his journey in the industry in the E.R Studio, I couldn’t help but think of all the big names that have graced these halls from actor Terrence Howard to rap superstar Meek Mill.  I had to inquire about working in a studio with such a lofty reputation. “It’s pretty much the hub of the city.  The #1 studio in the city.  Everybody pretty much has been through here if you’re going through Philly.” Omega states proudly.  After touring E.R its unassuming location gave way to an impressive studio that boasts a sound booth that could fit a whole orchestra.

Although TV and radio were monumental achievements in Omega’s life his true passion lies withing creating music and touring.  Touring allows him to share his gift and feed off the energy of the crowd.  Aside from Wale, Omega has toured with with the likes of Outkast as well as State Property. Although life on the road can be gruesome, it’s Omega’s comfort zone. “I’ve literally been all over the world 2-3 times fold.  To me there’s nothing like it, it’s kind of like what I prefer.” Omega explains.

With presence on the airwaves, his mug on TV, and a passport littered with stamps, what else could this guy do now?  Well working with one of the greatest comedic stars of all time for starters.  It turns out DJ Omega is in the middle of a project involving Wale and Jerry Seinfeld.  It seemed so out of left field that I had to get the scoop on this.  Although he sat back and recanted how the whole scenario came about nonchalantly, the signs were all there that this project is slated to be a big deal in the music world.  In fact shortly after this interview a photo of Jerry and Wale on the cover of complex went viral.  So how did this all come about you ask? “If you’re familiar with Wale’s work, we did a mixtape called ‘More About Nothing,’ where we took Seinfeld episodes, chopped it up and used them as the overall theme for the project.  With that, it caught a lot of wind, received a lot of accolades and launched Wale with his situation with Warner and currently with Maybach.”  Omega continues, “A couple years later Wale hit me up saying ‘Let’s do it again.’ I am like we can’t do it again unless we get a big dog to do it.  Either Larry David or Jerry Seinfeld got to host this joint.  He [Wale] was like, ‘That’s impossible they ain’t going to do it.’  I am like watch me work.” Sure enough after months of persistence and and pitching the ideas to Jerry’s people, Mr. Seinfeld himself agreed to work on the project. “10 months later we got Jerry in the studio, pretty much now we’re just trying to finish up the music and get it ready for the people,” DJ Omega explains. 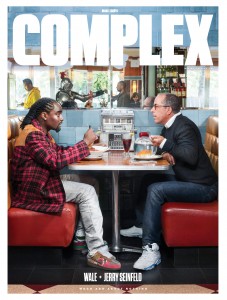 From a snotty nosed 12 year old with a set of turntables to producing a mixtape with Jerry Seinfeld, it’s safe to say that Omega has come a long way.  As a “young OG” in the game Omega is still happy to lend out any and all advice to up and coming DJs looking to follow in his footsteps.  One of the first orders of business to those starting out is to do your homework Omega quips. “I suggest if you’re a DJ or up and coming DJ, do your research, do your history. There’s a lot of great, great DJs out there that stick to the pure essence of hip hop.” After name dropping the likes of Kool Herc, Cash Money, and Jazzy Jeff as figures up and comers should be familiar with, Omega segues the topic into his disdain for “fake DJs.”

“You can tell when a real DJ steps into a venue and rocks compared to someone that has a bunch of songs on an Ipod.” This remark sparked me to delve deeper into an epidemic in the DJ world that pits purest vs DJs that rely on technology to get through sets.  “I can’t sugarcoat it.  Like I do feel a type of way when I see a DJ using a controller.  At least with me, if you come to a DJ Omega event, you’ll see me on the mixer, you’ll see me doing body tricks like scratching.  Those things to me are basic DJ,”he describes.  “Now with the whole EDM wave and people just pressing buttons and pumping their fists, it’s a lost art.”

To Keep Up With DJ Omega

The Pope is Coming to Philly
Check Out Zagat’s 50 Best Restaurants in Philly.