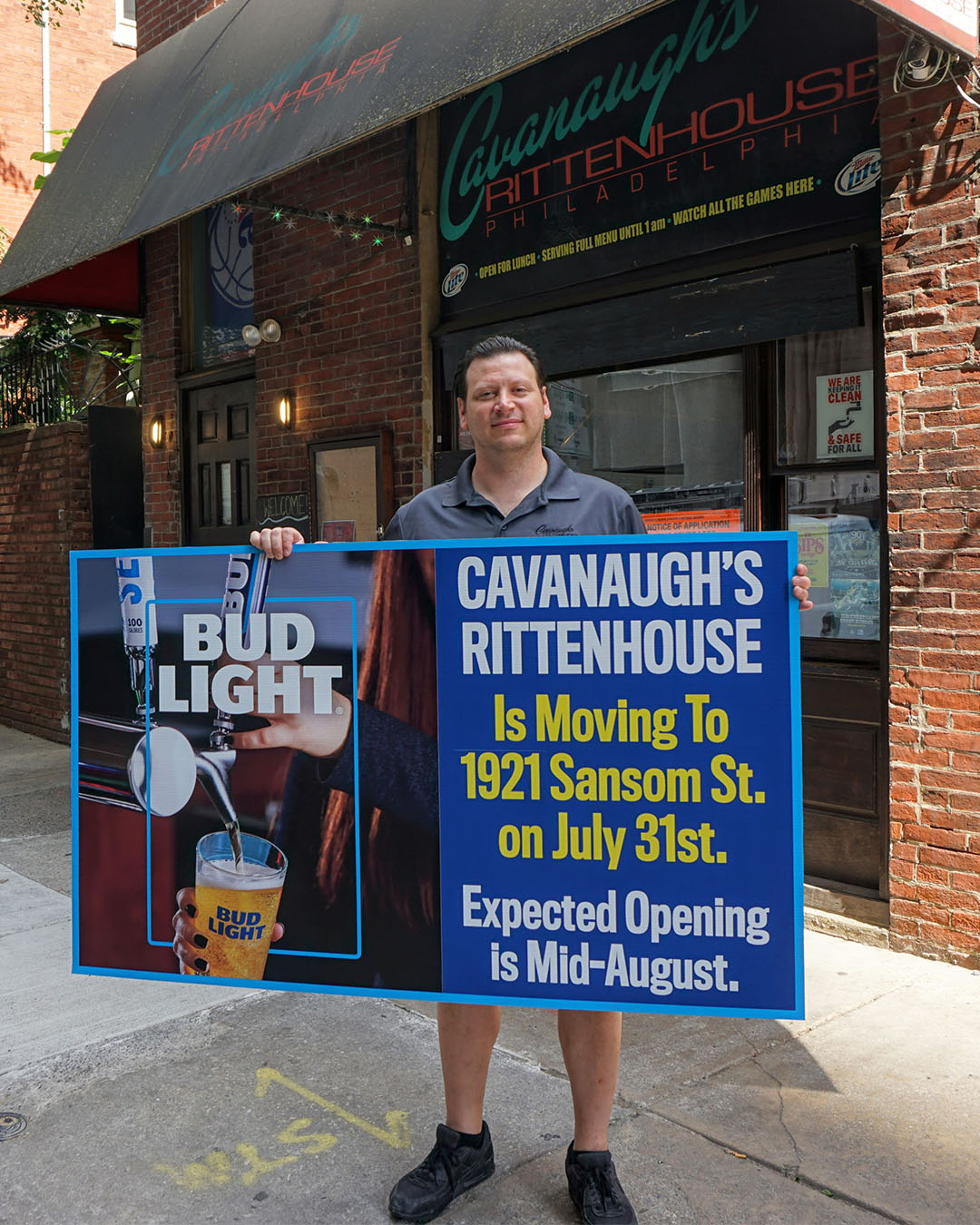 A Rittenhouse staple and sports viewing hotspot is on the move. Owners Kenneth Hutchings and Patrick Pawliczek, along with Director of Operations Mike Anderson, announce that Cavanaugh’s Rittenhouse will close its current location this weekend in time to open a brand-new expanded and larger location this fall. Cavanaugh’s Rittenhouse opened in 2008 at 1823 Samson as one of Center City’s top spots for sports viewing, lunch, happy hour and great drink specials. The current location will close this Sunday, July 31st after last call – and reopen in early fall at a brand-new location at 1921 Samson Street, in a building owned by Pearl Properties. The new location will feature over 4,000 square feet of space, two levels, two main bars, 22 HD oversize televisions, an 11 foot media wall for game viewing, seating for around 190 people, an upstairs mezzanine for private events, and more. Look for crowd pleasers and signature favorites on the menu, like Cavanaugh’s famous wings and burger, plus look for the addition of pizzas with Cavanaugh’s new pizza oven, plus more gluten free, vegetarian and keto offerings.

“Moving into a new space is a chance for everything to be fresh, new and exciting,” said Cavanaugh’s Director of Operations Mike Anderson. “We will have 10 TVs behind the main bar. There will also be an 11ft by 6ft video wall that will be viewable from everywhere inside the new space. We will be incorporating more vegetarian options into the menu to go along with a couple of items that are more health/diet friendly. We will also be adding a N/A section to the drink menu that will feature a few mocktails and a couple of N/A wines. We will have everything our fans and customers have loved over the years – plus new things for a new audience we hope to introduce ourselves to. This is a win-win for customers old and new. We are really excited!”

He added, “For the move, we of course are taking our staff with us. These are the people who have helped us build the business that we have now. With these people in place we know that the new place will feel like a home away from home for our loyal regulars very quickly. Additionally, we are going to keep most of the beers and spirits that people love. The menu is going to get an update, but the fan favorites will still be there. Cav’s Sauce – our house made wing sauce – is coming over and going to be featured in our new Buffalo Chicken Pizza.”

Cavanugh’s Rittenhouse is an elevated sports bar, grill and restaurant that offers lunch, dinner, happy hour, late night, sports viewing, game day action, special events, casual vibes, come as you are, and a welcoming atmosphere that appeals to everyone – from sports lovers, to neighbors, to construction workers, to office workers, to hospital workers, to tourists and everyone in between.

Cavanaugh’s Rittenhouse will move to 1921 Samson Street this fall, with an estimated opening date for early to mid September. The current location will close on Sunday, July 31st after the last call. There will be festivities nightly for those that want to celebrate and share memories in the current space and raise one more pint glass.

When opened, the new location will feature a brand new space that was renovated from top to bottom in a building owned by Pearl Properties, connecting to the Harper. The space was not previously occupied. In their new home, Cavanaugh’s Rittenhouse will feature two levels with 4,000+ square feet of space, with 45 seats at the bar and 70 seats at tables on the ground main level, and 25 seats at the bar, 10 at the rail looking over the lower level and 40 more at tables on the second/mezzanine level. In total look for around 190 seats inside, with outdoor seating to be added next year. The downstairs and upstairs bars will both feature full service bars – as well as ample TVs and sound systems for an epic game day.

For game day action, Cavanaugh’s aims to be the premiere new hot spot for Eagles, Sixers, Phillies, Flyers and more. Look for 22 large screen HD televisions, and an 11 foot high resolution big screen for the ultimate in game day viewing. Look for NFL Direct Ticket, NHL Center Ice, NBA League Pass, MLB Extra Innings. SEC, ACC, and PAC12 networks, plus college alumni game watch parties. This past year Cavanaugh’s hosted University of Georgia, University of Wisconsin, South Carolina University, and University of Tennessee. Occasionally they host the University of Florida as well. The Eagles will be on our 11×6 video wall as well as most of the tvs. They will also be showing other games with the NFL Direct Ticket Package and NFL Redzone so customers can keep up with your fantasy teams and wagers. They even have a group of Carolina Panthers Fans that watch their team with every week.

Cavanaugh’s Rittenhouse will also host local DJs, live music, special events and private parties. The integrated sound system will add to event and game day action. There will be four dart boards for the Darts League and general play.

In the kitchen, look for a full food menu crafted by Head Chef Michael Budzilowicz. Budzilowicz is a great story of working hard and making a name for yourself – and working up the ranks in the city’s food and drink scene. He started washing dishes in 1994 at the Kimberling Inn and worked up to line cook. In 2000, he started at Devil’s Alley with former Rouge Chef Michale Yeamens. He worked his way up to sous chef. In 2010, he went with Yeamens to Rouge as a line Cook, and became a sous chef there too. In 2017, he opened the kitchen at St. Benjamin’s Brew Pub. Then in 2018 he became the Head Chef at The Little Lion – prior to the fire. After working at different places for a year he was brought to Twenty Manning by Chef Yeamens. He quickly rose from line cook to sous chef, and then to head chef. When the pandemic hit. As places reopened he worked between Rouge, Audrey Claire, and Twenty Manning. In 2021, he heard about our impending move and came over to join the team ast Cav’s as the Head Chef/Kitchen Manager.

For menu direction, there is a simple mission – good food done right. Anderson said, “We want all of our food to be fresh, taste great, and have a broad appeal. There should be something for everyone – from the sports fans, to the after work crowd, to the people leaving the gym. We make everything we can.”

For new surprises, look for fresh pizzas and flatbreads when the new kitchen opens. There will also be gluten free, vegetarian, keto and other options, including the Beyond Burger with Peppers and Mushrooms.

For the bar program, Cavanaugh’s will continue to focus on quality beers and carry a lot of local favorites. They aim to keep the drinks simple, clean, and approachable. There will be eight taps pouring drafts, with some national brands as well as craft/microbrews with a local focus. For wine, the goal is to have an affordable and balanced wine. They carry Pinot Grigio, Chardonnay, Sauv Blanc, Rose, Pinot Noir, Cabernet, and Malbec. They will also expand with non-alcoholic White and N/A Red. Additional selections include typical spirits, White Claw Seltzers, Stateside Seltzers, Surfside Teas and a selection of ciders like Downeast Original, Jacks Stone Dry and Magners.

The main floor bar is a sports bar where people can mix and mingle or enjoy a bite to eat while on their break or while watching the game. The Mezzanine bar has a much more comfortable vibe. With the lower ceilings, color choices, and warm woods, the bar will have a more intimate appeal.

Anderson said, “We took a whole bunch of things from the old place and brought them over to the new place. Mixing the old with the new will help people feel like they are at Cav’s. Our new bar will feature the same style bar rail that the old bar had. We are even taking the back bar from the old space and bringing it to the upstairs/mezzanine bar.”

He added, “We wanted a bar where people can be seen. The island style bar allows for maximum bar seats as well as making the bar a place to be. The tvs are above and inside the bar. This is where the action is. We were inspired by some things we saw on Pinterest of at home bars. We wanted to bring that at home feeling to our space. We feel like we did that fairly well. We hope people agree with us. We chose a dark blue and green color palette. The green is almost black to blend with the black ceilings but to also complement the warm blue walls. It has a modern feel without going too far. We chose a pesto green to soften the tone of some of the other spaces while working with our other choices. We went with a newer industrial vibe. Exposed ceilings and duct work, Edison Lights, and warm woods. We want the space to feel clean and open while staying warm and inviting.  We can’t wait to show everyone the work we have put in to create the same welcoming atmosphere and familiar signature elements with a new space and some amazing upgrades.”

The full menu will be available even late night until 1:00am – making it one of the latest kitchens open in the area at a time when many kitchens are closed at 10:00pm, 11:00am and Midnight.

Hours for the new location will be seven days a week, 11:30am to 2:00am, for lunch, dinner, happy hour, late night and sports viewing.

The Frankford Tiki Bar Opens This Weekend and Will Feature Frozen Cocktails, Live Music and Tacos
Badges Are Now On Sale For The 31st Philadelphia Film Festival