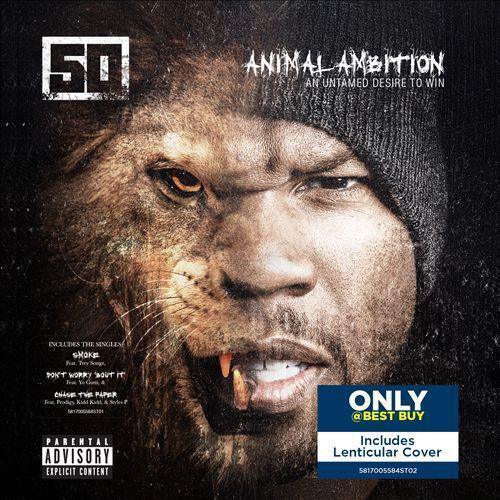 With two albums scheduled for 2014 releases, Curtis Jackson got his work cut out for him this year. His first of the two, ‘Animal Ambition’ marks 50 Cents first studio album since his disappointing ‘Before I Self Destruct’. The question remaining is can a reinvigorated, refocused Fiddy make a return to certified platinum status.

‘Animal Ambition’ is pretty dope. The beats knock and there is a good variety of hood bangers and urban radio treats. A maturing 50 Cent even looks past old beefs in collaborations with Jadakiss and Styles P. Squashing beef may be a new thing for Fiddy, as recently he also reunited on stage with Lloyd Banks, Tony Yayo, and Young Buck.

As far as delivery goes, not much has changed for 50 on ‘Animal Ambition’. You obviously won’t find complex, deep lyrical content, but he delivers gritty street tales with his trademark lisp with renewed hunger for the game. There may not be any singles that replicate the success of ‘In The Club’ or ‘Candy Shop’ but overall it’s a decent showing from Curtis Jackson.  His follow-up album, ‘Street King immortal’ is slated to be released later this year.

George Jung Released From Prison, Guess What His First Meal Was?
VIDEO: Judge Fist Fights Lawyer During a Trial