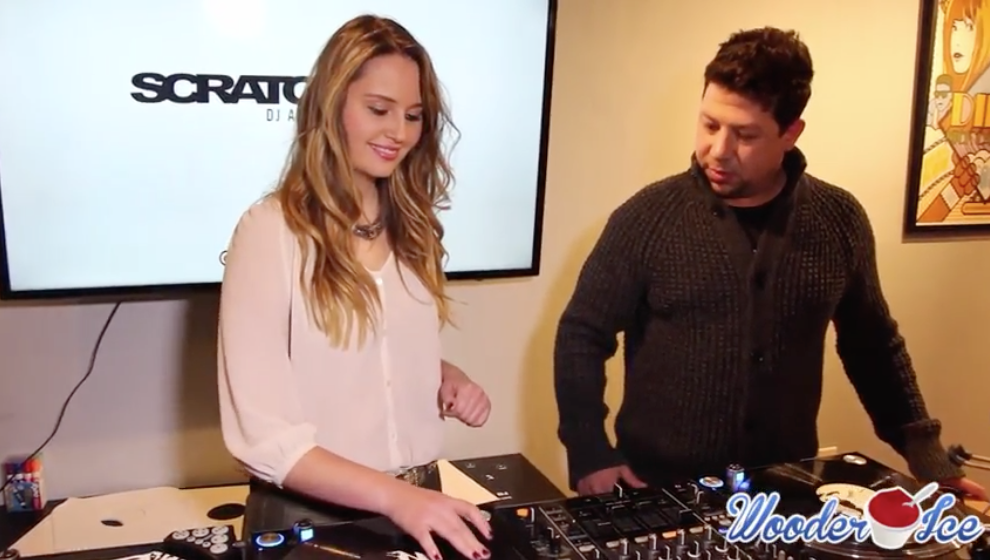 I’ve always joked that if could go back in time, I’d curse out my guidance counselor for never suggesting DJing as a career.  Often thought of as second fiddle to rappers and musicians, DJing played the background in the music culture.  However, as years passed and the music landscaped evolved, DJing has been thrust into the spotlight, so much so that many of the biggest names in music in both hip hop and EDM are in fact DJs.  However, to become a great DJ it was basically a process of immersing yourself and trial by fire.  Well this has all changed thanks to Scratch DJ Academy.  Luckily for us this national school for disc jockeys just opened up shop in Philly, so our own Brittany Lewis Stopped by to get some DJ 101 lessons.

Although, the Scratch DJ Academy in Philly is brand spanking new, the company itself has been been around for 14 years churning out new DJs as well as sharpening the skills of established DJs.  What began as a dream by founder Rob Principe turned into a reality during a chance encounter with the late legendary DJ, Jam Master Jay.  It didn’t take long after Rob Principe’s elevator pitch before Jam Master Jay was onboard.  Before long the two opened the first Scratch Academy in New York City not long before Jam Master Jay tragically lost his life. In an ironic twist, when speaking about starting the academy Jam Master Jay stated, “If I don’t teach what I’ve learned, what I’ve helped create then it’s going to die with me.”

Carrying on Jam Master Jay’s mission to teach DJing and preserving the culture, The Scratch Academy has since expanded nation wide with six different locations including LA, Miami, Chicago, Atlanta and of course Philly. 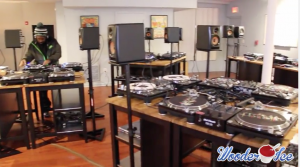 Philly’s own Cosmo Baker who runs the Scratch Academy in Philly, has been on the DJ scene since a teen in high school. Cosmo Baker was pretty much a natural when it came to DJing and was booking club gigs before he was even legally allowed in, which meant having to be snuck in through the back entrance on many instances.  Now a seasoned vet, Cosmo is living by the Jam Master Jay’s montra of sharing the wealth of knowledge he’s acquired over the years.  On this particular day he took time out to teach Brittany a quick lesson simple scratching and “finding the one.”

The actual DJ 101 class at the Scratch Academy in Philly caters to what Cosmo playfully describes as the “Starbucks Crowd.” This pretty much encompasses those that do not know a lick about DJing and unfamiliar with the equipment or may know a thing or two and want to become proficient.  The DJ 101 classes run once-a-week for six weeks and Cosmo Baker promises that upon completion you will know enough to get started in the world of DJing.  However, the academy also caters to those that are already gifted when it comes to the wheels of steel.  Established DJs can be found here as well, brushing up on techniques, learning new tricks such as advanced scratch and music production, branding and social media. Pretty much everything you need to become a walking enterprise.  Their “Pro Track” courses run twice-a-week for 48 weeks and include everything that is involved with any other college course including midterms, exams and homework.  Meaning you could potentially flunk out of DJ school(this may be hard to explain to mom and dad).

Perhaps you have a kid who’s fascinated with the likes of Diplo or Jazzy Jeff, after school private lessons are also available.  Hey not every kid is looking to join a sports team or play an actual instrument. So helping to nurture their artistic talents is what Scratch Academy does best.

Being that Philly is a musical town and has been instrumental in the creation of the modern DJs, it’s only fitting that a school like this exists here. While New Yorkers basked in their park jams and DJs showcased their cutting skills, Philly was grooving at block parties that were breeding grounds for legendary DJs.  Keeping that old school spirit alive is what makes the Scratch Academy in Philly vital to preserving the local DJ history and culture.  “We’re preserving the culture and letting people know why things work the way they work because some guy in South Bronx decided to do it this way. The cultural implications of that, DJing is now a billion dollar industry.  The whole thing about is that I believe that the working class blue collar DJs are the life blood of the industry.  Where you may have a Calvin Harris and he’s grossing $46 million a year, that’s great ya’ know but at the same time guys that were spinning at bars on 8th & Erie, the guys that are doing weddings in Marlton, NJ, the guys that are working their day jobs as security guards at the bank and their able to have 4 hours a week on a Friday night where they can really be their true self, those are the folks that really propelled the industry,” Cosmo vividly explains.

So for those with the DJ bug or just want to challenge yourself to learn a new skill, what better place to invest in yourself in than the Scratch DJ Academy in Philly.  We’re talking about a dope skill, potential to make extra dough or perhaps launch the dream career you’ve had since a child.

If You’re Looking to Remix Your Life Contact The Scratch DJ Academy in Philly: