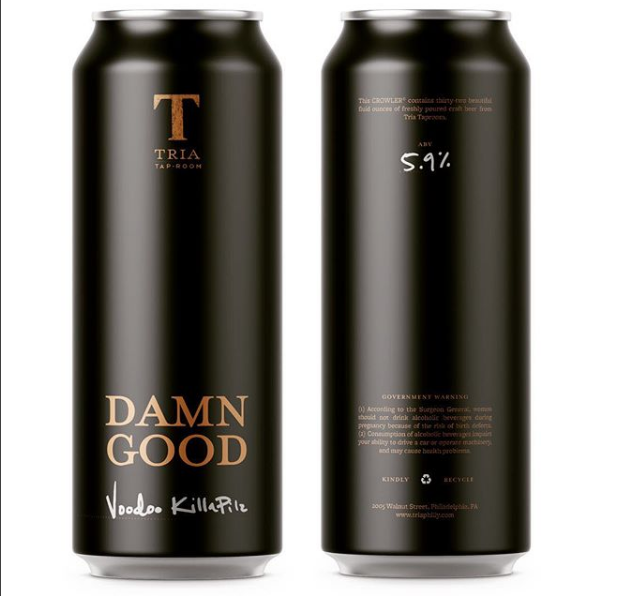 Beginning on Thursday, February 1, Tria Taproom will offer Crowlers™: filled-to-order, recyclable 32-oz. cans of craft beer from any of their draft beer lines. A cross between a can and a growler, Crowlers™ are single-use aluminum beer cans perfect for bringing home two pints of a favorite beer, many of which are only sold in kegs and therefore unavailable to go anywhere else in Philadelphia (click for hi-res image of Taproom’s custom-designed Crowler™ cans).

To celebrate the debut of Crowlers™, Tria Taproom encourages fans to visit ahead of the big game this weekend for 33% off Crowlers™ from Philadelphia’s “underdog” breweries – that is, those that have been in operation for two years or less. The offerings will include:

“We’re proud of our diverse, ever-evolving draft list, and with our new Crowlers™, our guests will be able to enjoy rare and exciting beers from top domestic and international breweries to go, as well,” says owner Jon Myerow. “From hard-to-find local offerings to top-notch Belgians – and everything in between! – this is a way for guests to ‘shop’ our beer list and bring home their favorites.”

All of Tria Taproom’s beers will be available in Crowlers™ for as long as the kegs last; offerings change frequently, and guests can always check out their current draft list, including how much of each keg remains in real time, online at http://tria.bevchek.com/menu. Special tappings, which will be known as Crappy Hours, will be announced via email (click to subscribe) and social media (@triataproom), and will feature discounts on select kegs, available only while supplies last. Guests can stop by Tria Taproom to purchase Crowlers™ to go, and either stay for a pint and a meal or hit the road, bringing their favorite beers with them in convenient, single-use packaging.