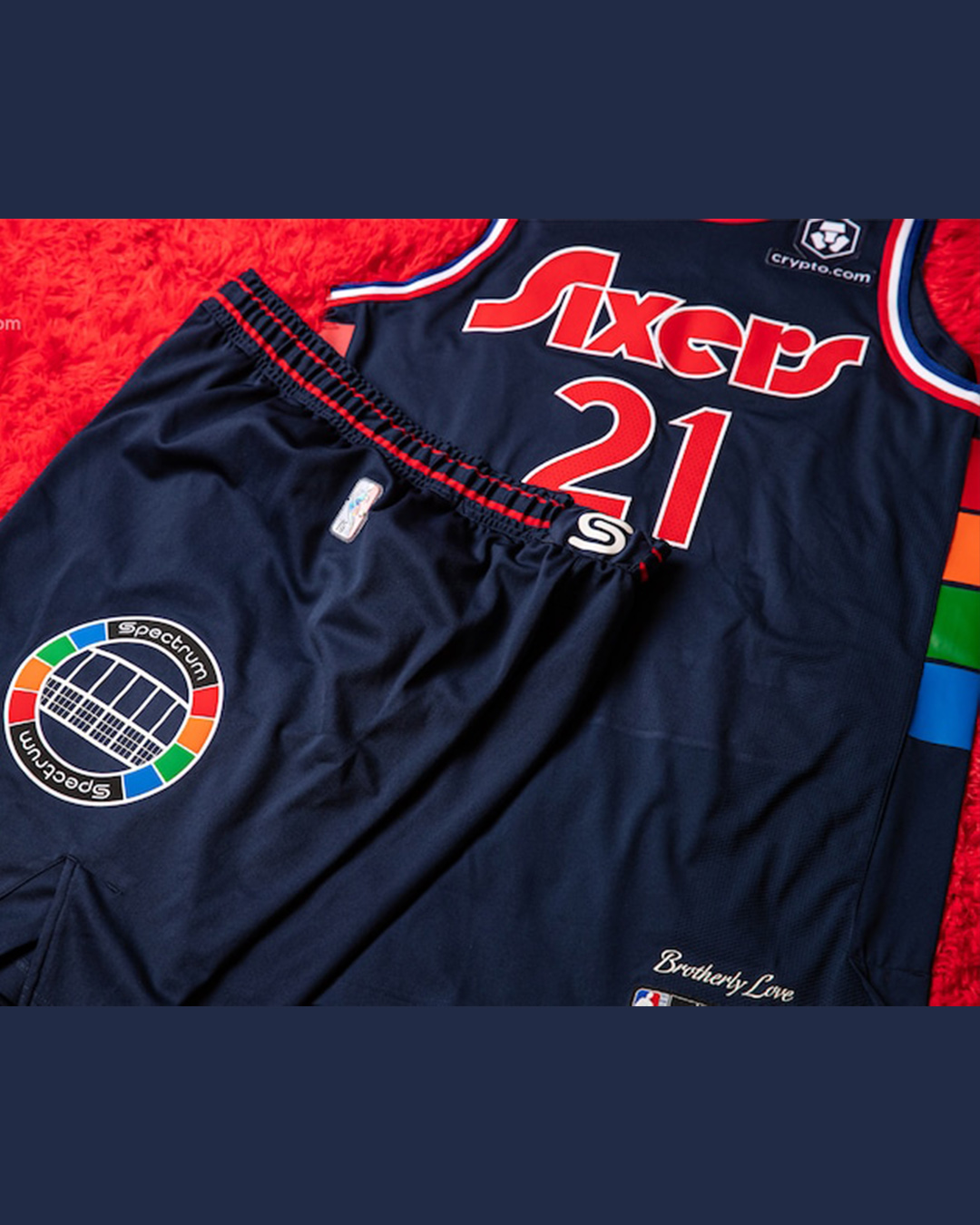 The 76ers Unveil Their New City Jerseys Inspired by the Spectrum 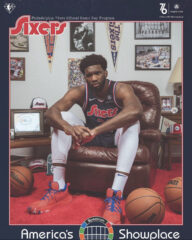 “The Spectrum holds a very special place in our franchise lore, having served as the 76ers’ home arena for nearly three decades,” Philadelphia 76ers President of Business Operations Chris Heck said. “The memories made at America’s Showplace, including the historic 1982-83 championship season, are priceless, and will be relived through the 2021-22 Nike NBA City Edition uniform. We’re also excited to display the colors of the Spectrum logo, which represent the teams that our fans love and support here in Philadelphia.”

The uniform, with a navy-blue base color, features a red, 1970s-style “Sixers” wordmark across the chest, which was inspired by a similar concept used in an arching fashion on 76ers uniforms from 1971-76. The team’s customary red, white and blue trims the jersey, while both sides of the top showcase the Spectrum color panel, displaying the colors of each of the four major sports teams in Philadelphia: the 76ers (blue), Philadelphia Eagles (green), Philadelphia Flyers (orange) and Philadelphia Phillies (red).

2021-22 Nike NBA City Edition merchandise will be available for purchase starting Monday, Nov. 15 on SixersShop.com and at the official team store at The Center. Visit sixers.com/city for more information on the uniform and its story.

The uniform’s shorts feature three pieces that call back to the Spectrum era, including a custom badge logo on one side of the shorts, the bicentennial “76” logo on the other, and an “S,” on the belt-buckle space of the shorts. Each uniform will feature diamond Nike and NBA logos representing the league’s 75th anniversary season.

Accompanying the apparel will be the City Edition court, featuring the custom Spectrum badge logo at center court. The painted area will be navy blue, while the sidelines and baselines will be red. The bench-side sideline will showcase the Spectrum color panel as well as the previously seen “Brotherly Love” script wordmark, signifying the bond shared among Philadelphia sports institutions. The 1970s-style “Sixers” wordmark will be seen in white on each baseline.

The partnership between the 76ers and Crypto.com has also inspired an exclusive series of non-fungible tokens (NFTs) that will be available for 76ers fans to purchase throughout the season. To learn more about this initiative, fans are encouraged to visit SIXERS.COM/NFT.

Naismith Memorial Basketball Hall of Famers Charles Barkley, Maurice Cheeks, Billy Cunningham, Julius Erving, Hal Greer and Moses Malone, each of whom has his number retired by the 76ers, played at the Spectrum. And the team played its historic 1982-83 championship season inside America’s Showplace.