The 2015 Roots Picnic announces the artist lineup and it’s as good as ever.  The annual concert will take place Saturday May 30th at Festival Pier and will showcase over a dozen established stars and rising talent in the music industry in just about every genre.

Although the larger Made in America concert has garnered more international attention, The Roots Picnic is Philly’s own.  Established by Philly hip hop/funk band The Roots, the concert is entering its 8th year and it is showing no signs of slowing down.

It goes without saying that The Roots will be headlining as they do every year, but the lineups are always laced with fresh new talent and this year is no exception.  Among the well known artists that will be performing at this year’s 2015 Roots Picnic are The Weeknd, Erykah Badu, A$AP Rocky, and DJ Mustard who has been setting the Billboard Charts on fire with hit record after hit record.

Taking place at Festival Pier The Roots Picnic is an outdoor music festival with two stages, an ultra chill vibe, and an almost county fair type atmosphere with food trucks, vendors, and activities galore.  It’s almost as if The Roots took a neighborhood block party and placed it right along the Delaware River.

Presale tickets for the 2015 Roots Picnic  go on sale tomorrow while the general tickets officially go on sale Friday March 13th at noon.  Tickets can be purchased here.

Here is the full lineup 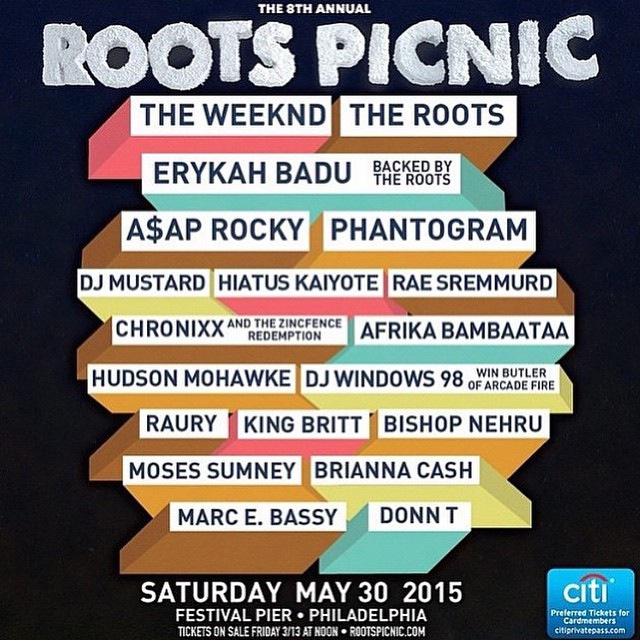