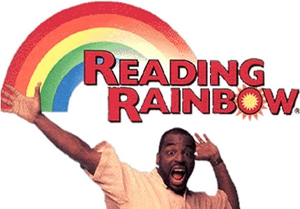 If you’re an 80’s baby like myself you can sing the Reading Rainbow theme song word for word.  The show not only made reading fun it made reading cool.  I think everyone was scouring their libraries to the suggested books on each show.

Now the wildly successful show  is poised to make a comeback.  However, this time as an app.  LeVar Burton the T.V show’s original host launched a kickstarter campaign to raise money for the project.  In it’s first day the campaign raised $1 million dollars.  Now the campaign is closing in on the $2 million dollar mark.

Reading rainbow was canceled back in 09′ when PBS had a change of heart in the way it wanted to teach kids.  Check out the video to see LeVar’s reaction after the kickstarter hit $1 million.  It’s a great video, “but you don’t have to take my word for it.”