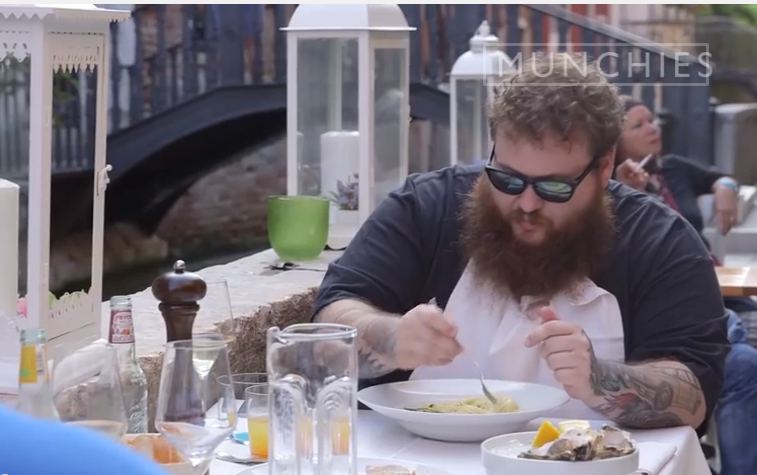 When it comes to cooking shows the conversation usually revolves around a select few entertaining shows on TV such as Man Vs. Food, Anthony Bourdain’s Parts Unknown, Bizarre Foods, and competition shows such as Chopped.  However, one rapper has launched a web series that has been gaining momentum among foodies and hip hop fans alike.  Action Bronson who is a heavyset Albanian rapper from Queens New York, known for his off-the wall lyrics and humor was actually a chef before picking up the mic.

After an accident in a kitchen injured him, Action began to pursue a career in rap.  It didn’t take long for this filter-less rapper to develop a cult following.  Looking to return to his first love of food, Action began producing an online food show series entitled “Fuck, That’s Delicious,” where he travels the world while on tour and samples food from critically acclaimed restaurants as well hole in the walls.

However, this isn’t your run of the mill food show where the host gives cliche critiques, Action freely uses profanity laced metaphors to describe just how good some his the dishes taste.  Often times sitting down with the chefs and sometimes owners of the restaurants, viewers get to see the side of the restaurant business many don’t get to observe.  Since chefs tend to abide with front of the house rules by being polite and politically correct, Action Bronson’s segments show chefs letting their hair down. It almost feels like you walked into a conversation among old friends talking about the good ol’ times.  The show overall is genuine in its feeling.

Action show isn’t limited to showing off dishes either.  It the grand scheme of things, Fuck, That’s Delicious is actually a very good guide to dinning while traveling.  Some of the recommendations Action gives are not always present on tourist brochures and are often times local gems only known amongst locals.  In addition Action Bronson takes visitors on mini excursions in every town he visits so that viewers can also get a raw feel of what the off-beaten path looks and feels like.

Overall Action Bronson’s show is essentially an uncensored, unfiltered, unapologetic version of Anthony Bourdain’s No Reservations.  Adding a hip hop twist and comedic humor, the show is not only addicting it’s educational.  Don’t be surprised if you find yourself salivating while binge watching.

5 Things You Want to Avoid Doing at Your Job’s Holiday Party
VIDEO: Hikers Walk on Ice So Clear it Looks Like They Are Walking on Water