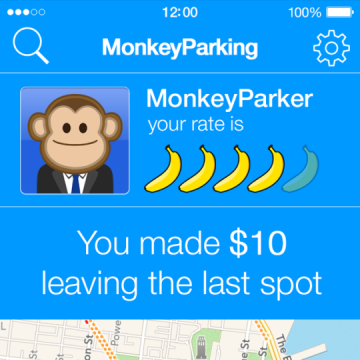 As if city officials did not have enough problems on their plate, Councilman Bill Greenlee has made a motion to ban an app that allows drivers to sell their parking spaces.

The MonkeyParking app which allows drivers in primo parking spots to login in and sell their parking spot to other drivers who may be circling the neighborhood.  Depending on the time, place, and urgency, drivers can really cash in.  The process is a three step process seen below:

MonkeyParking is already in use in other cities.  However, Councilman Greenlee has publicly stated  on KYW1060 Radio that “There’s something just fundamentally wrong, in my opinion, with anyone selling what should be a free parking spot.” Also adding “People should have the right to pull in freely. And it certainly can lead to a lot of problems, I think.”

Greenlee is scheduled to introduce his new measure to be voted on this week.  If it passes anyone caught selling parking spaces could face up to a $250 fine.

The New 76ers 3D Court is Jaw Dropping, Check it out
Popular Philly Restaurant Green Eggs Cafe is Set to Open in Miami