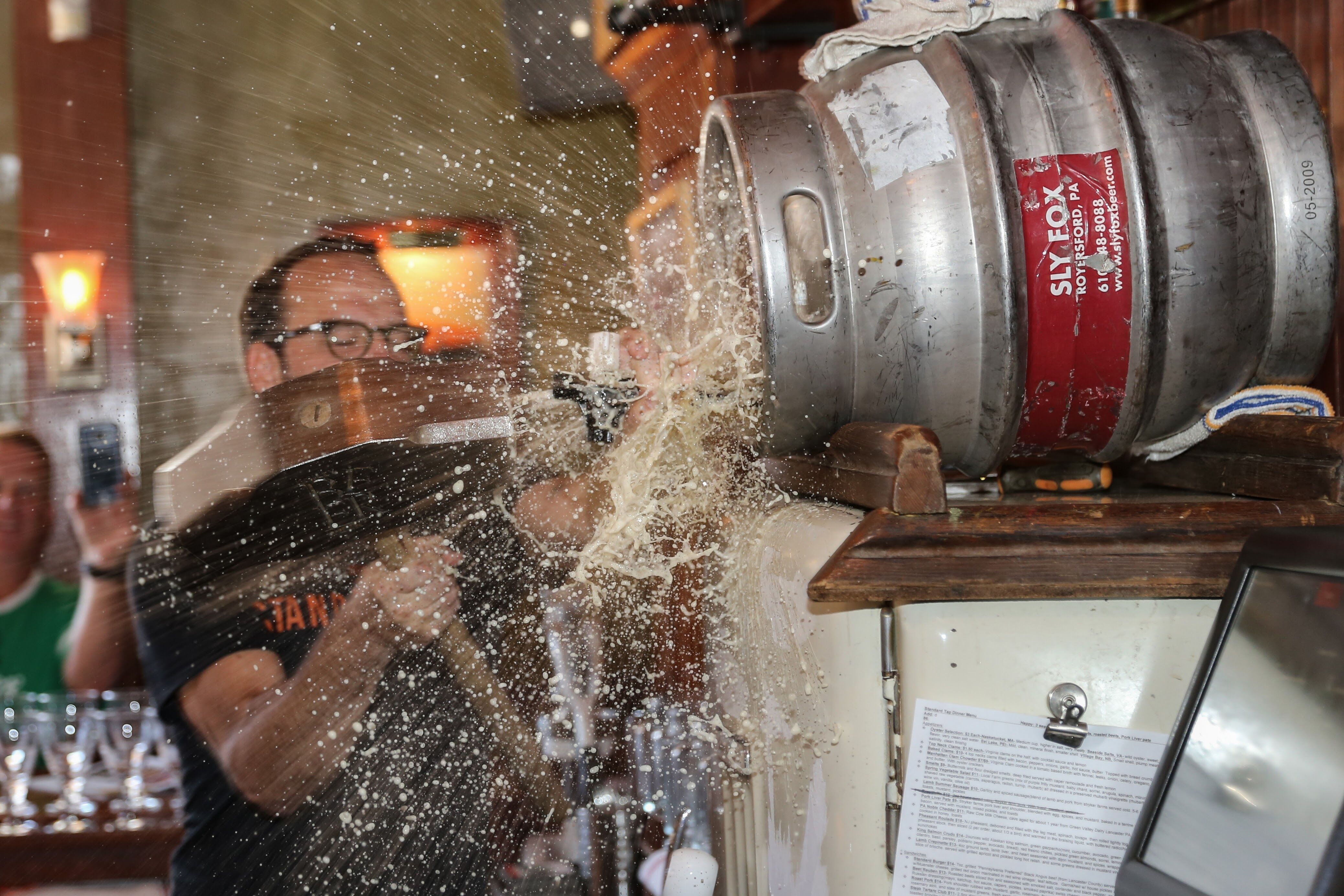 Philly Beer Week Returns May 31 to June 9 with Nearly 2,000 Events in Ten Days

Philly Beer Week Returns May 31 to June 9 with Nearly 2,000 Events in Ten Days

Philly Loves Beer announces the return of Philly Beer Week XII between May 31 and June 9, 2019 at hundreds of venues around the region. Raise a pint and celebrate Philadelphia as “America’s Best Beer-Drinking City™” with ten days of non-stop festivals, dinners, tours, pub crawls, brewer nights, educational workshops and charity events. Look for a record breaking 2,000 beer-soaked activities presented by hundreds of breweries, bottle shops, restaurants, bars, craft-centric businesses and neighborhood organizations. There will be a little something for everyone, as events are designed for the beer novice to the beer aficionado. Pair exclusive and rare ales with craft cuisine in some of the city’s best dining rooms. Philly Beer Week kicks off on Friday, May 31st with the all-day Hammer of Glory Relay that ends at Opening Tap at 2300 Arena. This annual kick-off party moves to an exciting new venue with a 65+ breweries and cideries all under one roof. Opening Tap will also offer the first pour of the 9th Annual European Collaboration Beer, Duveldelphia. This exclusive 6.8% hoppy blonde was brewed in Belgium at the famed 148 year-old family-owned brewery, Duvel Moortgat, with local PA brewery winners, La Cabra Brewing. On top of Duveldelphia, look for this year’s special edition of Brotherly Suds X, a collaboration beer from local breweries Tröegs, Victory, Yards, Sly Fox, Stoudts, Iron Hill and Flying Fish. For a full roster of events, plus Opening Tap tickets, visit www.phillylovesbeer.org.

“It has been very gratifying to be apart of the process that is Philly Beer Week,” said Philly Loves Beer Executive Director, Christina Dowd. “Watching this celebration of 10-days evolve and maintain its same energy since the beginning has been amazing. The bars, restaurants, breweries, etc. all put forth so much thought and devotion to creating unique events and showcasing delicious beers – regional, national and international. We are proud that these 10-days truly showcase what makes Philadelphia “America’s Best Beer-Drinking City”™ all year long.”

Philly Beer Week is now entering its 12th year, celebrating more than 1,000 events among hundreds  of participants, and tens of thousands of kegs kicked. For 2019, look for a line-up that brings beer-focused events to every corner of the region – from cozy neighborhood pubs, to Philadelphia’s restaurant row, to the region’s most well-known museums, to the city’s largest beer gardens, to the banks of the Schuylkill River. Philly Beer Week kicks off with a whirlwind day starting with an exciting journey around the city and ending with the biggest event of the entire celebration. From Opening Tap to the minute the final kegs kick, get ready for a beer-soaked ride you won’t soon forget.

For Philly Beer Week XII, Opening Tap will head over to a brand-new, bigger and better location at the 2300 Arena in South Philadelphia on Friday, May 31, 2019, from 6:30pm to 10:30pm. The new space will allow exciting changes and room for a record number of participants.

“We’re not kidding about that bigger boat!,” said Dowd. “This year we’ve moved Opening Tap across town to the 2300 Arena in South Philly and have had an overwhelming response from breweries and cideries who want to fill the cups of eager drinkers.  From freight, to Mummers, to Extreme Wrestling, the building at 2300 Arena has seen it all. If these walls could talk, we know they’d enjoy sharing a beer with our ever-growing beer community that will be joining us on May 31. Also, did someone say Live Band Karaoke?! Ummm yeah – that should be quite a treat!”

Opening Tap is Philly Beer Week’s signature kick-off party that brings the entire craft beer community together for a ritualistic “first tapping” of the festival – followed by a raucous party with endless samples. A highly-anticipated night, Opening Tap features rare and limited pours from more than 65 breweries and cideries, plus live entertainment.

Get out your boogie shoes! For entertainment, Philly Loves Beer  welcomes back VJ Fava le Chic, of Oxbow Brewing and formerly of Nodding Head and Dock Street Brewing.  Although it’s hard to follow his incredible act, this year’s attendees get a piece of the spotlight as guests have a chance to participate in live band karaoke with Pat Finnerty & the Full Band.

Opening Tap VIP tickets are $66 (includes a specialty souvenir glass, and an additional hour of access, beginning at 6:30pm featuring rare pours) and General Admission tickets are $46 (includes souvenir glass and complimentary samples from more than 65 local and national breweries and cideries). Tickets are on sale now:

Please find an early list of breweries and cideries listed below, with more to be announced:

THE HAMMER OF GLORY AND HOG RELAY

The Hammer of Glory is the custom, hand-forged keg hammer that is the official mascot of Philly Beer Week. The HOG travels throughout the region – and across the United States – as an ambassador for Philadelphia’s beer scene. On the first day of Philly Beer Week, the HOG visits 25+ bars, breweries and restaurants on its way to Opening Tap. The public is invited to ride along and celebrate!

Hop on the bus behind The Hammer of Glory and watch as it is passed Olympic torch-style from venue to venue. Past conveyances have included a festive mix of the weirdly absurd (ziplining from atop Standard Tap, for example, or escorting the HOG to Yards Brewing in a DeLorean) and insanely practical (ascending 51 floors to take in the majestic views from SkyGarten, then leading a cavalcade of motorcycles at TIME).

The Hammer of Glory Relay will begin at Hop Angel Brauhaus (7980 Oxford Ave) starting at 9:00am. Ticket holders can get on and off the bus during any stop on the route. The full schedule, including ticket options, will be announced soon.

The HOG Relay will conclude with the HOG’s arrival at Opening Tap for the ceremonial first tap of Philly Beer Week XII firkin of Brotherly Suds.

In the spirit of Philadelphia and the collaborating nature our breweries take part in, Opening Tap will be the first opportunity to taste the 9th Annual European Collaboration Beer, Duveldelphia.  This 6.8% hoppy blonde was brewed in Belgium by raffle winners from La Cabra Brewing based out of Berwyn, PA alongside the 148 year-old family-owned brewery, Duvel Moortgat. This collaboration blends Duvel’s mastery of fermentation and La Cabra’s American-style hopping! Idaho 7 and Citra hops provide a fruity bouquet balanced with a dry body.

“I can’t believe we made a beer with Duvel,” said Dowd. “I fondly remember my first Belgian beer because it was a Duvel and it’s the beer that got me exploring more beers and styles from across the pond. I love the Philly Beer Week tradition of an International collaboration, and the timing was impeccable as Duvel had just installed a small pilot brewing system and were eager to test things out. We are thrilled to partner with such a large, renowned brewery.”

When asked why this collaboration beer and process is such a big deal for 2019, Dowd explained, “To put things into perspective, European breweries tend to make one beer and make it really well, and are only recently expanding into creating different styles. For instance, Duvel Moortgat is a very, very large brewery that has been making the Duvel beer recipes exactly the same for almost 150 years. So, working on new and smaller batches was becoming somewhat of a challenge for brewers who are used to working with a much larger system.  But, lucky for Duvel Moortgat, the folks at La Cabra are quite used to the size of the pilot system as it as a similar output to their own brewery in Berwyn. So, in areas where Duvel was like ‘can we even do that?!’, La Cabra brewer Dan Popernack was like ‘heck yeah, trust me!’”

Dowd added, “Philly Beer Week’s tradition of a European collaboration beer is not only a delicious product of two fantastic breweries, it really is a collaboration of cultures as we share different views, styles of brewing, histories of brewing, experiences of brewing – but bringing everything full circle and uniting us through that golden glass of refreshing beer.  In the end, crossing these boundaries and creating new communities within our community is one of the most satisfying pieces to evolve from the project.”

Duveldelphia makes its debut at Opening Tap. After Opening Tap, you can catch this beer on draft in and around the city!  Drink your way into history and don’t sleep on this beer – once it’s gone, it’s gone! Locations will include Memphis Taproom, Jose Pistola’s, Teresa’s Next Door, Bru Craft & Wurst House, Interstate Drafthouse, Pistolas Del Sur, Hop Angel, Uptown Beer Garden. This list is continuing to grow and we will have a running list on phillylovesbeer.org, as well as, social media.

Philly Beer Week XII will feature a special firkin of Brotherly Suds, a collaboration beer created from local breweries Tröegs, Victory, Yards, Sly Fox, Stoudts, Iron Hill and Flying Fish. Brewers this year gathered at Yard’s Brewery on April 16th and created this year’s edition – which is a hoppy citrus saison. Look for Brotherly Suds at Opening Tap, and then at locations around the city. Stay tuned for all locations!

Carol Stoudt, another original founder, groundbreaking woman brewer and owner of Stoudts Brewing also spoke about why it is important for the community to continue evolving. “We started out as six brewers, but we are committed to being inclusive. Sharing time together and supporting everyone has always been a keystone of the craft beer community,” she said.

Philly Loves Beer presents several signature, not-to-be-missed events each and every year. One of the most popular each year is below – act fast as it always sells out!

* Art on Beer – Be honest, have you bought a beer just because the label caught your eye? Explore with us on Tuesday, June 4 at 7PM at Warehouse on Watts (923 N Watts St, Philadelphia) as we dive into why the artists and the breweries make the decisions they do.  From an entire redesign to an addition of a new flavor series or one-off, the third installment of the Art on Beer panel discussion will be moderated by JP Flexner, most notably known for his design work for Neshaminy Creek Brewing Company of Croydon, PA. This year’s installment features: the illustrations of Brewery ARS of South Philadelphia; the combined styles of free hand and graphic design from Free Will Brewing of Perkasie, PA; our Canadian friends, Collective Arts Brewing, who fuse the craft of brewing with the inspired talents of emerging artists and musicians; and Stillwater Artisanal from Baltimore, MD whose goal is synthesizing art and beer. Advance tickets are $15 and are available at https://www.universe.com/events/art-on-beer-tickets-philadelphia-FGPVKR

Philly Beer Week celebrates long-established and much-anticipated favorites. Here are some annual favorite events that you should be on the watch for: