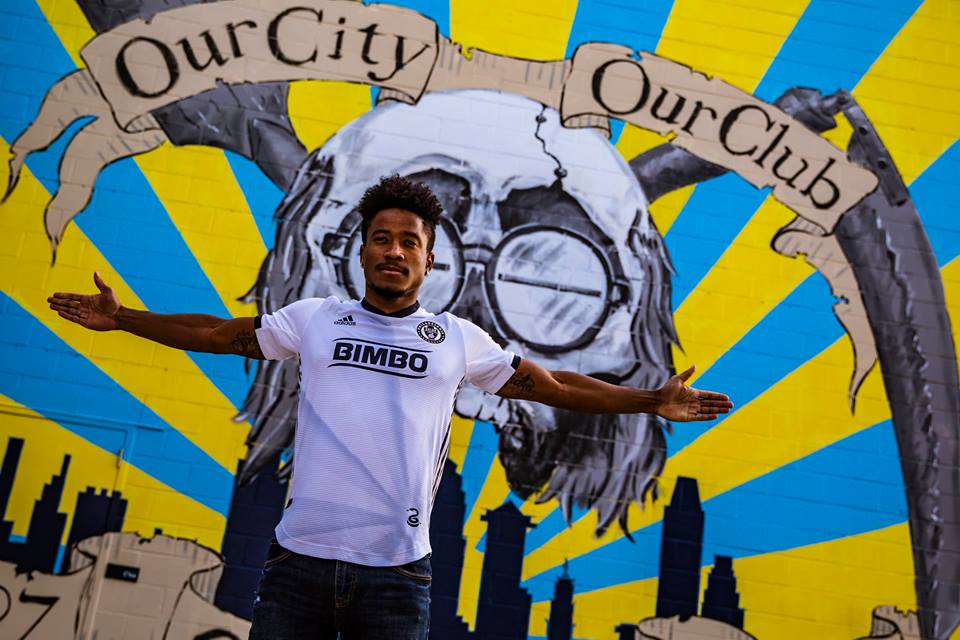 Philadelphia Union today unveiled their new 2019 secondary jersey, featuring the first-ever-in-MLS customizable back tags in honor of the club’s 10th season. The jersey also showcases a simplified navy and white color scheme and a new radial design stemming from the signature snake logo on the lower left hip.

The 2019 “Inspired Kit” was inspired by the fans and Union history, while also incorporating Adidas’ new “digitized” design concept to bring freshness to the kit.

“We’re a club founded by fans and we wanted these kits to reflect that in our 10th season,” said Doug Vosik, Union Senior Vice President of Marketing and Communications. “It’s fitting that we found inspiration for a design directly from our supporter group, the Sons of Ben, and fans. Over the years, the Sons of Ben have used sun radial designs frequently in their tifos, in addition to their in-stadium street art mural, a fan-favorite photo moment on game day. To honor all fans, we invited them into the design process by enabling them to vote on hundreds of back tag designs to decide on the final ten options for the secondary jersey.”

Forgoing the standard pre-determined designs usually set by clubs, the Union welcomed fans to become a part of the design process for the 10th season jersey, bringing a unique identity to the new kit. The fan-voted 10 customizable back tags, created by local influencers, are available for each player to choose from for their on-field jerseys.

The 10th season kit also sets out to celebrate the sport of soccer uniting all, as evident through the many different influencers who joined the Union in contributing back tag designs, including local athletes Zach and Julie Ertz and Jorge Alfaro, rapper Freeway, alternative rock group The Wonder Years, club Chief Tattoo Officer Bonedaddys Tattoo, Phang, as well as the club’s supporter group, the Sons of Ben.

Additionally, three stripes line the sides of the jersey, replacing the color blocked navy siding for a cleaner, simpler design. Bimbo’s partnership with the Union remains for the jersey, while the logo has been changed to a monochromatic navy instead of their traditional full color red, white and blue logo. The primary jersey returns for 2019 with a matching single-color navy Bimbo logo.

The 2019 jersey goes on sale February 8, 2019, and to celebrate the “Inspired Kit” release, the Union will hold a kit launch party that evening. Media and fans are encouraged to attend to see the unveiling of the kit with guest appearances by Union players. For more details and to RSVP please click here.