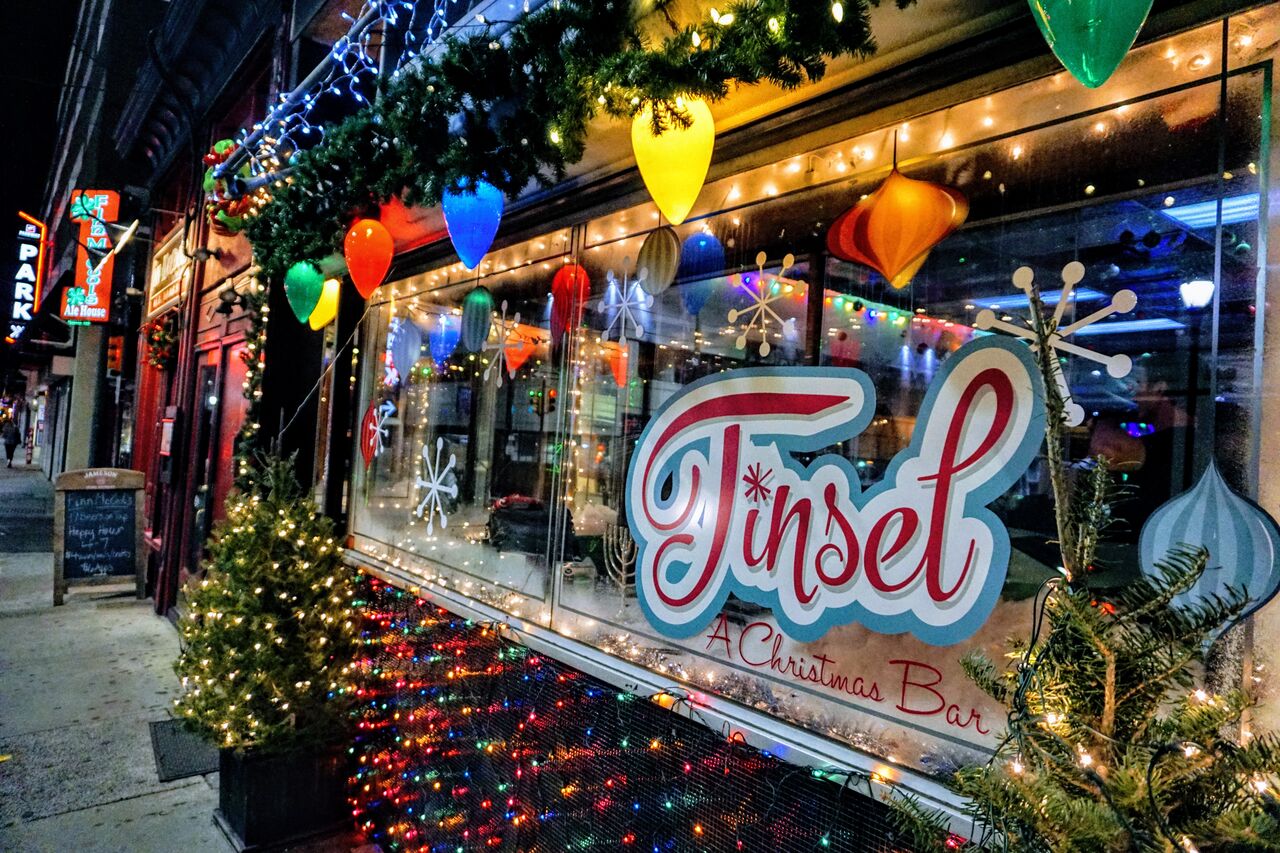 Teddy Sourias and Craft Concepts Group announce the season grand opening of Tinsel Christmas Pop-up Bar at 116 S. 12th Street, Philadelphia.  The mad elves from Tradesman’s, BRU Craft & Wurst, Cinder Copper & Lace, U-Bahn, Uptown Beer Garden, Kontrol and Finn McCool’s Ale House have spent months decking the halls and brings back this holiday sensation back with an even bigger space, extended hours, more days, extra twinkle, added glitter, festive holiday tunes and more. New surprises include music playlist curated with help from Mr. Christmas himself, DJ Robert Drake from XPN, and a custom take-home Tinsel soup can with cocktail to benefit MANNA.  The holiday-themed cocktail and craft beer bar will grand open on Thursday, December 6, 2018 and run through New Year’s Day.  Tinsel‘s hours will be Monday and Tuesday, from 5:00pm to 10:00pm, Wednesday, Thursday and Friday, 2:00pm to Midnight, Saturday Noon to Midnight, and Sunday Noon to 10:00pm. Tinsel will offer happy hour specials Monday through Friday 5:00pm to 6:00pm with $2 off select craft beer, Winter Wonderland cocktails and wine. During Happy Hour, professional “mall” Santas will enjoy their first drink for free when they “drop down the chimney” in full Santa attire and show credentials. Mall Santas in full attire will drink for half off all other times! Tinsel will end the season with a special New Year’s Eve Party and New Year’s Day Celebration. Details of New Year’s Eve and other special events will be announced shortly.

Tinsel is Philadelphia’s ONLY home-grown Christmas Bar that will bring even more Christmas cheer into the space formerly occupied by Simpson’s Jewelry in Midtown Village. Tinsel debuted to capacity crowds every single day it was open last year. Tinsel was originally opened in less than three weeks when Simpson’s moved out of the space next to Finn McCool’s. This year, Craft Concepts Group spent months on raising the ceilings, breaking through the walls, exposing the original grand staircase, lengthening the bar and creating even more space for holiday revelry.

“Craft Concepts Group is proud to pack even more Christmas cheer into Tinsel Christmas Pop-up Bar for the 2018 holiday season,” said Sourias. “In 2017, we purchased the 116 S. 12th Street building for future development. We opened Tinsel as a temporary concept to showcase our creativity and have some fun in between projects. We had no idea the concept would take off like it did. We were at full capacity with a line from day one to New Year’s. Tinsel‘s popularity made our team want to bring back the concept and go even bigger this year. We expanded the space and created new design elements. We wanted to create one of the best Christmas bars in the country – with the intimacy of a smaller space, room to mix and mingle, with over-the-top decorations. After the opening of our largest project, Tradesman’s, Tinsel lets our team show off their creative chops and really have fun for the holidays. Come spend the holiday with us!”

Tinsel will offer a full selection of liquor and spirits, Christmas cocktails and all-specialty Christmas beer drafts. Eight draft lines will pour draft beer and draft cocktails. Draft beers will focus on American and Belgium holiday specialty ales and beers throughout the season – with starting selections being:

* 3 Philosophers Ommegang –  A unique blend of a Belgian-style dark ale and Liefmans Kriek, an authentic cherry ale from Belgium. Cherry chestnut in color, it’s opaque but not cloudy with full carbonation topped by a smooth, tan head. Flavors and aromas of roasted malt, molasses and brown sugar, dark fruits, brandied raisins and chocolate. 9.7%, $8

Christmas Cocktails will range from $10.00 to $13.00, with three new cocktails ranging up to $18.00 with a take-home keepsake gift. The opening menu is as follows: