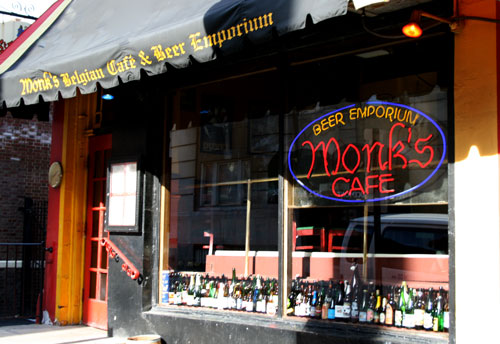 Put some stars in your eyes, and truffles in your mouth, for the last party of 2015 at Monk’s Cafe (264 S. 16th Street, 215-545-7005.) Our annual New Year’s Eve celebration dinner is so stellar, we have to split it up into two seatings to avoid disrupting the space-beer continuum.

For our early seating at 6:30pm on Thursday, December 31, Chef Michael Joyce and co-owner Tom Peters have expertly designed a four-course dinner with beer pairings ($75, tax and tip included) that will send you off into the night well-fed, armed with tiaras and noisemakers, and ready to bang those pots and pans at midnight.  This early seating always sells out first, and features Belgian beers from Orval, Brasserie Dupont, DeDolle and Lindemans.

Those who prefer to dine at 9pm and ring in the New Year with us can expect a decadent six-course feast paired with special vintages from some of the world’s greatest breweries, including Cantillon, Orval and Chimay ($125, including tax and tip.) Finish with a flourish of Malheur Brut, a strong, methode Champenoise golden ale, for your midnight toast.

That’s what we call starting off the new year the right way.  Call Monk’s Cafe at 215-545-7005 to purchase tickets for either seating, or to ask us to pronounce these beer names.