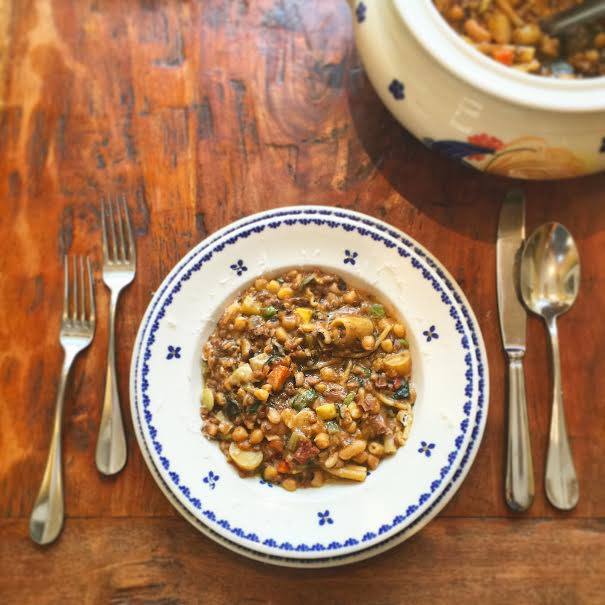 Le Virtù will celebrate the arrival of spring by preparing and serving Le Virtù, an iconic dish native to the province of Teramo. The traditional minestrone, a hearty Italian soup that is shared communally every spring in Abruzzo’s province of Teramo, is made only once a year and highlights the patience, discipline and work ethic of the Abruzzese people.

This year, the Le Virtù team will honor the tradition by passing out bowls of the celebrated soup to their friends and neighbors on East Passyunk Avenue, and visitors will also be able to purchase a bowl from the restaurant to go, allowing them to enjoy it on site or bring it home to share with their own friends and family. In Abruzzo, failure to share a portion of Le Virtù has been known to end friendships and break up families.

Le Virtù (the soup) is prepared and shared annually on May 1: families and restaurants alike combine the last of their winter stores, such as dried beans and pastas or cured meats and sausages, with the first of spring’s fresh ingredients, such as vegetables and herbs. Recipes vary by town and by family; the dish originally celebrated having survived the harsh Apennine winter and each year meant varied stores of preserved staples and harvests of fresh spring greenery.

Traditionally, the soup contains seven each of certain key ingredients, such as seven types of beans or seven types of pasta, a nod to the region’s devout Catholic heritage. There is no single or “correct” recipe, and no individual ingredient is supposed to outshine any other. The ingredients, sometimes totaling as many as 49, have always been dictated by what is left over in the larder after the harsh Abruzzese winter and what the first harvest of the spring yields.

Owners Francis Cratil-Cretarola and Cathy Lee first sampled Le Virtù a decade ago while traveling through the Italian countryside. They realized, to their embarrassment and disappointment, that they would be near the town of Campli on May 1 and had made no plans to enjoy a bowl of the soup. Hovering outside a local bakery, the proprietress invited them in for a bowl, and within minutes, they were caught up in a lively familial gathering. The bakery owners turned out to be cousins of South Philadelphia butcher Sam Meloni, a beloved neighbor whose shop at Iseminger and Tasker Francis and Cathy frequented when buying ingredients for their own family feasts. Warmed to the core by the delicious soup and the friendly spirit of serving it among friends, they returned to Philadelphia eager to share Le Virtù with their own neighbors – and quickly realized that it was the perfect name for their restaurant, which has since become one of America’s most respected authentic Italian restaurants.

Continue Reading
You may also like...
Related Topics:le virtu

Get Ready for the South Street Spring Festival With Over 30 Restaurants & a Philly Taco Eating Contest!
Check Out Macaroni’s New Outdoor Kitchen P_Square Opening This Month!