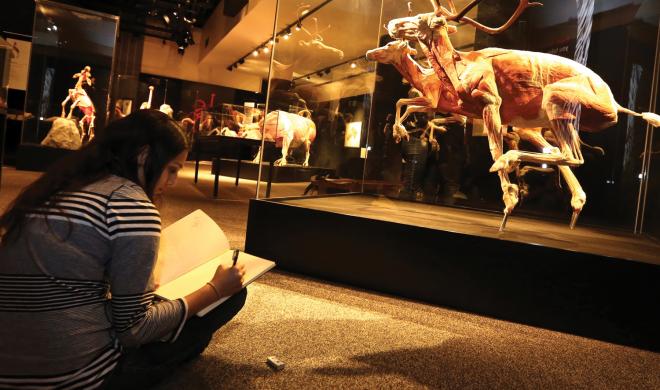 Grab your sketchpad, pencils, charcoal and easel and take advantage of a unique opportunity to capture animal diversity and biological science on paper – in rare form, from the inside out.  Whether you’re an accomplished illustrator or a budding artist, join us every Tuesday night throughout February and March for Anatomy and Art: Sketch Night inside BODY WORLDS: Animal Inside Out. 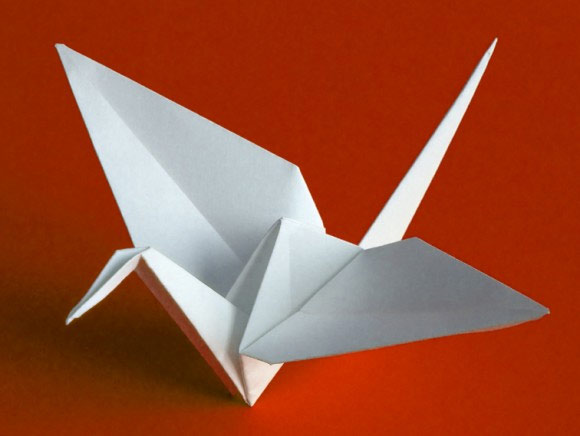 Don’t miss Origami Mania. Learn the ancient art of origami and transform a flat piece of paper into a beautifully-folded design. Make an origami design for yourself, and leave another one at the Museum to be included in a large-scale installation on April 29.

March 5th-15th | The Academy of Music 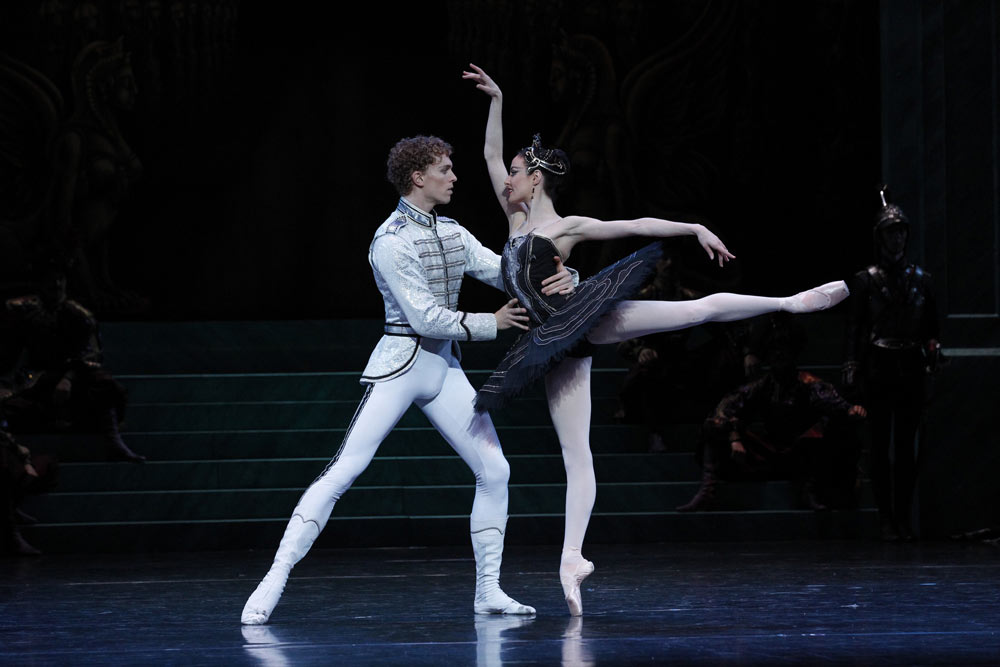 Behold Pennsylvania Ballet’s own stunning version of the world’s most renowned ballet. Premiered in 2004 to national acclaim, Christopher Wheeldon’s stellar production of Swan Lake was commissioned and performed to sold-out audiences for the Company’s 40th anniversary season, followed by sold-out performances at Edinburgh International Festival. 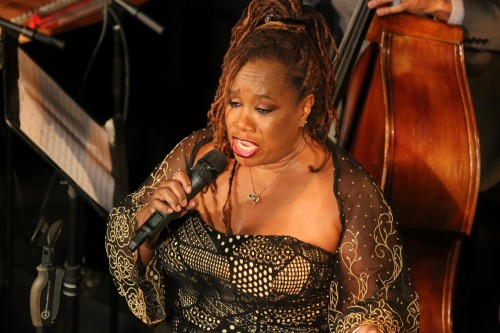 First Friday at the Barnes is back. Get glammed up and head to the Barnes for art, cocktails, and star power. We’re taking you back to old Hollywood as a nod to this year’s Philadelphia Flower Show theme. Join us for Denise King’s musical tribute to legendary jazz singer Sarah Vaughan. 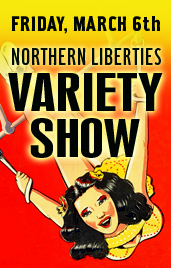 The 13th Annual Northern Liberties Variety Show Friday, March 6th, 2015 Doors: 7:00 pm / Show: 8:00pm $12 (THIS EVENT IS 21 AND OVER) Witness the (Very, Very) Hidden Talents of your Neighbors! Seeing Is Believing! Proceeds to benefit NLArts Kids! If YOU would like to perform a 3-minute act contact sugarvision10@gmail.com 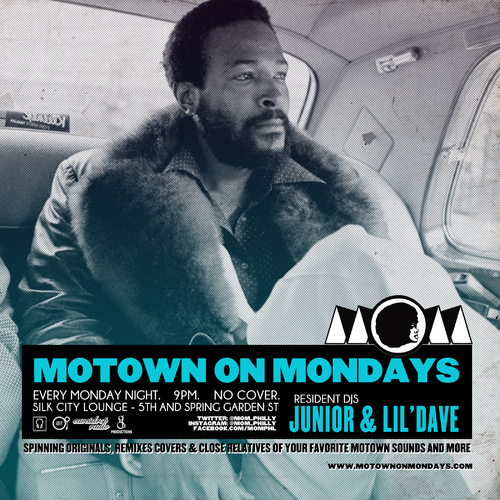 Silk City Presents: Motown On Mondays Philadelphia Say the name lil’dave and an ingenue of class and aural distinction comes to mind. lil’dave channels the far reaches of the soul, all the while effortlessly combining taste, groove, and appeal with today’s technology. Some do it for the fame. Some do it for the money. But the very best selectors play music for the love of it. 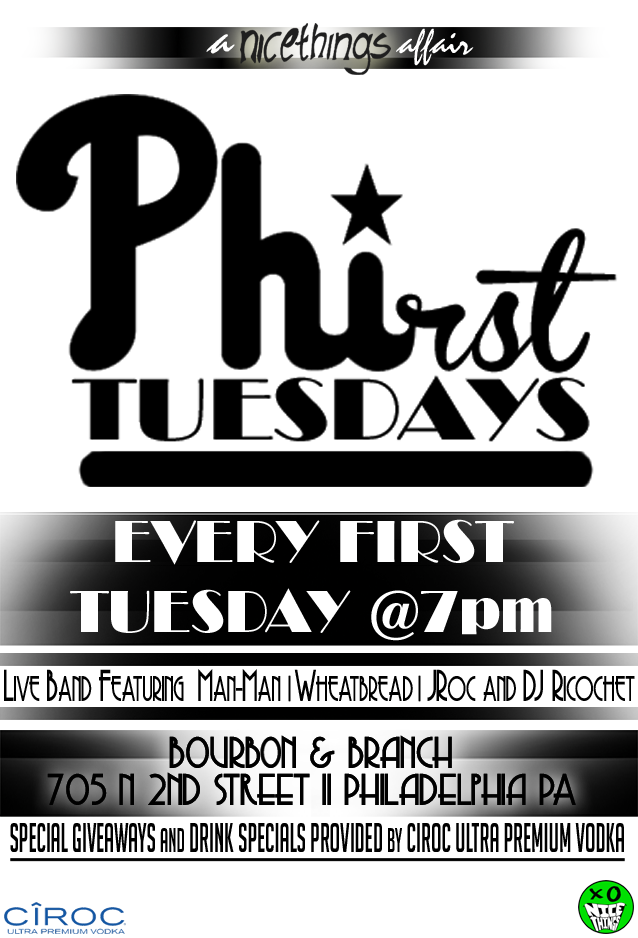 “PHirst Tuesdays” A new monthly jam session every first Tuesday of each month.  Festivities kick-off @ 7pm at Bourbon & Branch (2nd and Fairmount) Live band (@ManManPhilly, This edition is hosted by Philly’s rising R&B star Beano Come through early and sign up and all that, or just come to check out some great music 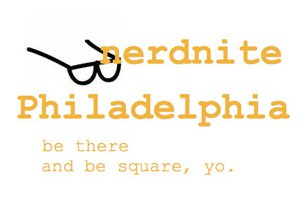 Nerd Nite is a monthly café held in more than 75 cities across the globe. For more than three years, Philadelphia has taken part in this monthly lecture event where bookworms, geeks, and gurus gather for drinks in a fun, casual atmosphere. The event strives for a relaxed, nerd-tastic vibe. It’s sometimes about comics or history, architecture or food, movie posters or even science—and that’s where the Academy comes in. 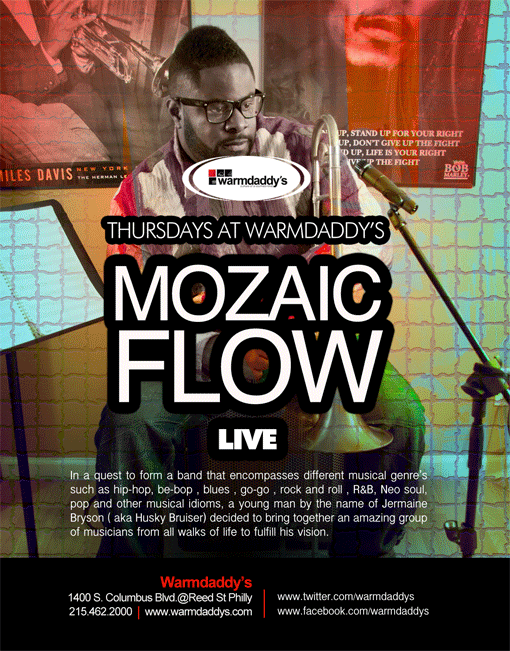 In a quest to form a band that encompasses different musical generes such as hip-hop, bebop, blues, go-go, rock and roll, R&B, neo-soul, pip and other musical idioms, a young man by the name of Jermaine Bryson decided to bring together an amazing group of musicians from all walks of life to fulfill his vision. Hear their awesome eclectic sound live every Thursday at Warmdaddy’s! 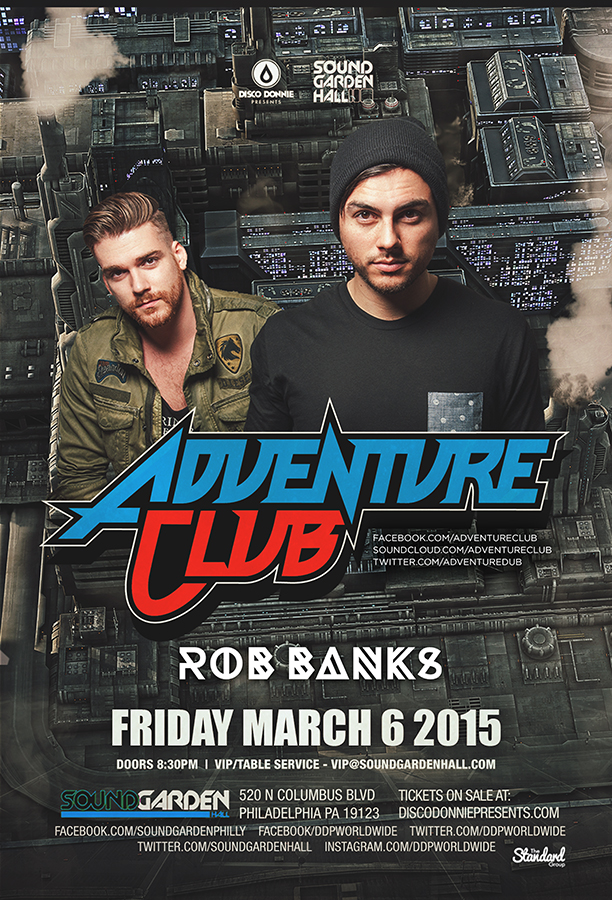 ADVENTURE CLUB ROB BANKS + more tba Bottle Service – vip@soundgardenhall.com After visiting SoundGarden Hall during the 2013 Life in Color After Party, Adventure Club realized how much they missed Philadelphia’s home for EDM. After that it was simply a matter of lining up our schedules. It’s on!!!

Enjoy the tunes of DJ Dave Mass every first Friday at The Raven Lounge. 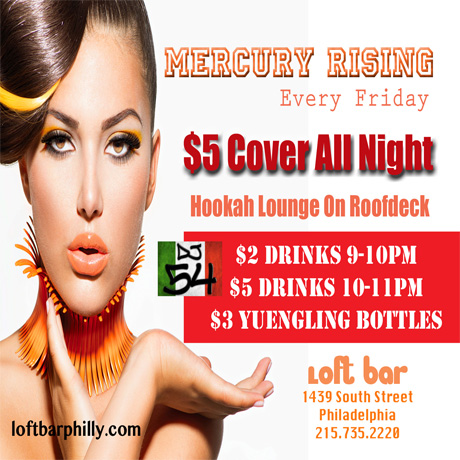 Mercury Rising Every Friday Each and every Friday at Loft Bar enjoy: $5 Cover All Night $2 drinks from 9-10 pm $5 Drinks from 10-11pm $3 Yuengling Bottles