Get Ready Because Wing Bowl 23 is This Friday - Wooder Ice 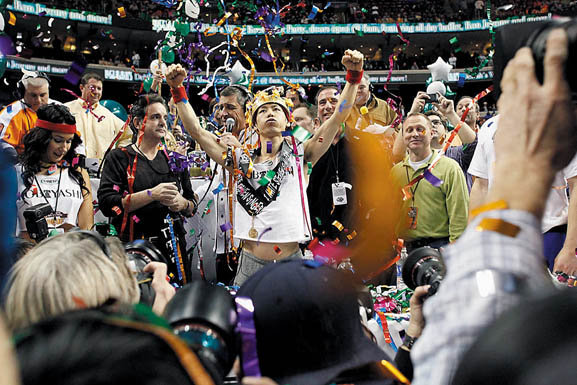 In Philly you either love it or you hate it, either way Wing Bowl has become a deeply rooted Philadelphia tradition. In fact with this being their 23rd year, the event itself is older than some of the attendees.

In case this is all new to you, Wing Bowl is a competitive eating contest that was created by local sports talk radio station WIP back in 1993.  What began as a head to head match-up of two eaters and 1000 attendees has spawned into a competitive eating showcase that now takes place in an actual sports arena.  The Wells Fargo Center to be exact. Wing Bowl has grown so popular that it now attracts the top competitive eaters in the world such as Japan’s Takeru Kobayashi, The Black Widow, and famed Nathan’s Hot Dog Champion Joey Chestnut.

Spectators are now treated to competitors entering the arena on parade-like floats as scantily clad local strippers, models, and other fine looking women escort them to the stage. Competitors then gorge on buffalo wings until one is declared a winner.  Often times you’ll see an eater puke, and it’s all part of the spectacle. Essentially it’s everything macho and chauvinistic you can think of, which is what makes it so popular. Wing Bowl organizers, attendees, and supporters are unapologetic and in a sense that attitude embodies the typical Philly sports fan.  In your face tell it like it is, you don’t like it fine, type of attitude.

This year Wing Bowl will be taking place this Friday January 30th at 6 am.  Yes, you read that correctly this is an early bird event and trust me that doesn’t stop the booze from flowing.  If you are looking to partake in this year’s festivities you can purchase your tickets here.

Also it’s worthy of noting that the celebration does not end when the competition is over.  Spectators eventually migrate in droves to the local gentlemen clubs where Wing Bowl after parties are wildly popular.  So if this is your cup of tea be prepared to make this an all day event.

Gov. Wolf Says He is All For Medical Marijuana Use
The Bellevue is Giving Away a Free Night Stay to The Couple With the Best Love Story