Everything You Need to Know About Penn's Landing's Summerfest Including Games, Fireworks, & Shows! - Wooder Ice 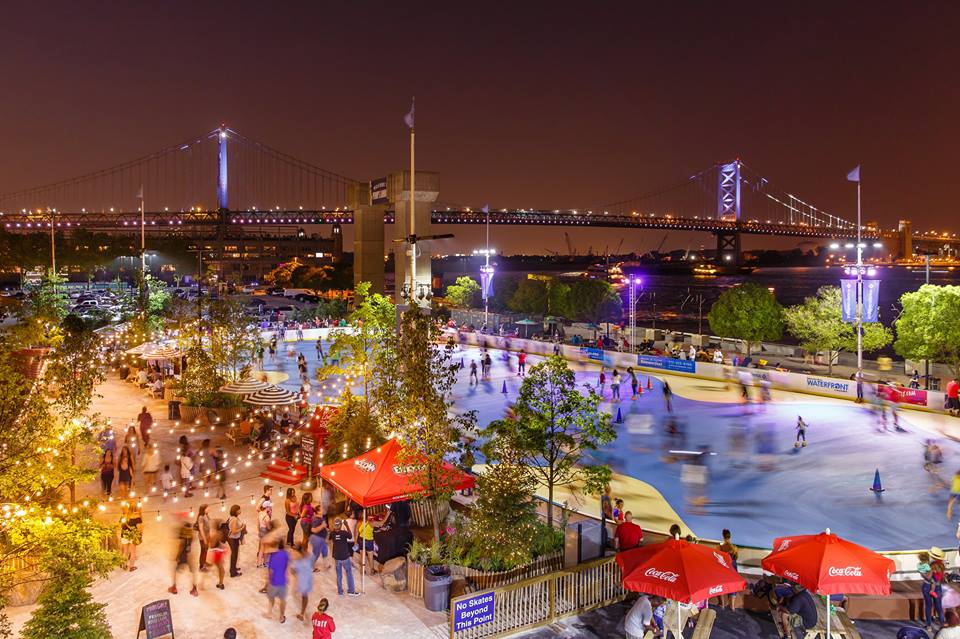 Everything You Need to Know About Penn’s Landing’s Summerfest Including Games, Fireworks, & Shows!

Everything You Need to Know About Penn’s Landing’s Summerfest Including Games, Fireworks, & Shows!

Philadelphia’s only outdoor roller skating rink is back this summer for its third season and opened to record breaking crowds this past Memorial Day Weekend. But the Delaware River Waterfront Corporation (DRWC) is pulling out all of the stops to ensure that the 2017 summer on the waterfront will be the most exciting yet. Opening on June 23rd, a new section which will be known as The Summerfest Midway will make its debut as the finishing touch in completing Philadelphia’s urban boardwalk. And what would a boardwalk be without rides and games?

The Midway’s main attraction is without a doubt the 60-foot Ferris Wheel ($4 per person to ride) that will transform the skyline and offer rides with panoramic views across the river and a birds eye view of Blue Cross RiverRink Summerfest and beyond.

Operated by Skelly’s Amusements, The Midway will open with a 60-foot, 16 gondola Ferris Wheel, accompanied by a carousel ($3 per person to ride).  The Ferris Wheel will operate from The Midway’s opening on June 23rd through July 9th. The popular Pharoah’s Fury swinging boat ride ($4 per person to ride) will bring new energy and shake things up (literally!) from July 10th through July 23rd at which point the Ferris Wheel will return and run through August 14th. A Typhoon Magic Carpet ride ($4 per person to ride) will cap off the season. In short, the carousel will be a permanent attraction throughout Summerfest, while the featured ride will change between the Ferris Wheel, the Pharoah’s Fury swinging boat ride, and the Typhoon Magic Carpet ride.

Of course, boardwalk entertainment would not be complete without a collection of exciting games and the chance to win great prizes. The Midway will include six pay-as-you-go games including:

A group of players shoot water at a target, making their character rise. The first player that makes it to the top of the game wins. The more players there are, the larger the size prize.

Players aim and throw their dart at a board filled with inflated balloons. The more balloons the player breaks, the bigger their prize is.

High Striker/Ring the Bell game (3 swings for $5, everyone wins a prize)

Kids get to show how strong they are by swinging a kid-sized hammer at a target. Hit the target hard enough and they ring the bell. And if they don’t ring the bell, they’re still winning!

Players use an old-fashioned Daisy cork gun to shoot corks at plastic cups. The player keeps shooting until they knock one over. The prize size is listed on the cup they knock over.

Players take aim at plastic plates lined up side by side in rows. Break 2 plates with a ball and win a prize.

The Artful Golfer is the place to practice your mini-golf game and enjoy the artwork of local artist, Peter Slavin who’s work now graces each of the nine holes along the course.  Blue Cross RiverRink Summerfest will be open seven days a week through Labor Day. Perhaps one of the most popular opening weekend features was Zoltar who tells your fortune for $1.00.

Paired with the continued activity at Spruce Street Harbor Park, weekly themed nights, weekend programming and special events throughout the summer, and soon featuring the highly anticipated addition of The Midway, the third season of Blue Cross RiverRink Summerfest has already begun to set the idyllic scene to enjoy summer days and nights.

Blue Cross RiverRink Summerfest goers can enjoy as many as five fireworks shows over the river throughout the summer.

Blue Cross RiverRink Summerfest offers a series of late night events for those 21 years of age and older. The late night series takes place after Summerfest closes to the public. All events are ticketed and include a drink and a night of themed activities. The series themes are as follows:

Visit our website for the latest schedule of events.

Admission is free for all Independence Blue Cross cardholders and employees

Visitors are welcome to bring their own skates

Blue Cross RiverRink Summerfest tickets purchased will be for an open skate, offering flexibility and fun for our guests.

Continue Reading
You may also like...
Related Topics:bluecross riverrink, summerfest

The Region’s Largest Pop Up Event is Back! Dîner en Blanc Returns to Philadelphia in Summer 2017
SHADOWBOXIN’: BOX WINE AND WU TANG AT LA PEG