Dyke March Takes to The Streets This Saturday - Wooder Ice 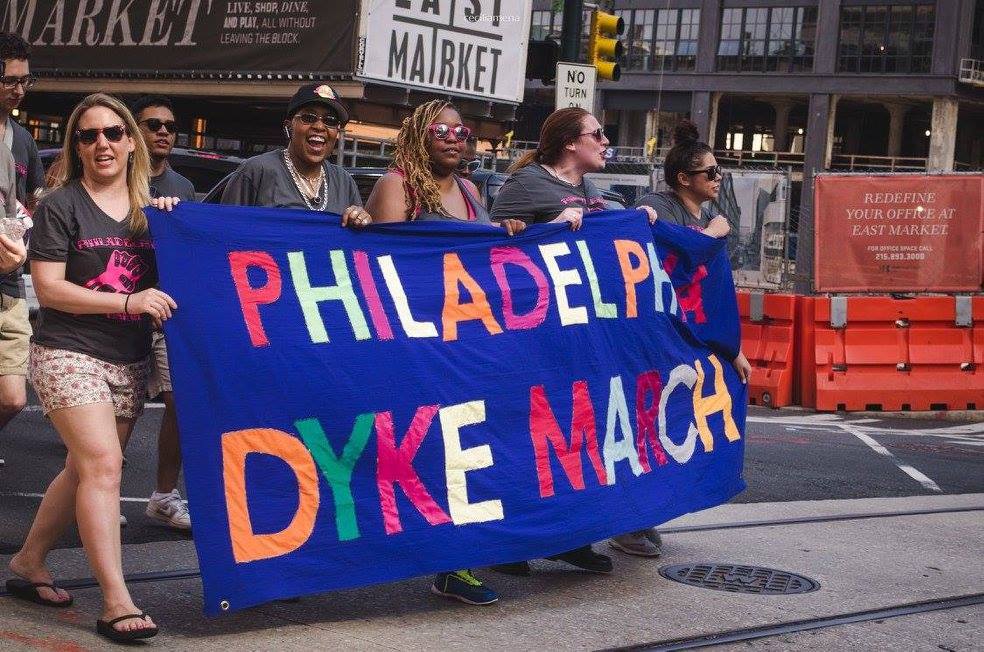 Dyke March Takes to The Streets This Saturday

Dyke March Takes to The Streets This Saturday

Descending upon Kahn Park, there was a notable uptick in the frequency of rainbow accessories, protest signs, and shaved heads sported by each passerby. The park, which is located on the outskirts of Philadelphia’s gayborhood on the corner of 11th and Pine, was teeming with police presence and electric dyke energy. The often informal and typically offensive word ‘dyke’ had made its way back into the city’s vernacular for a glorious occasion: The Dyke March.  The march, which has been held annually in Philadelphia since 1998 and has roots in cities across the nation tracing back to the 1980’s, is a dyke-positive alternative to typical pride events.

For an hour before the march began, self-described dykes of all kinds and their allies gathered in Kahn Park for a kick off event that included performances, speeches, and even a surprise proposal (she said yes by the way!). The park’s location–tucked away in the bottom corner of the gayborhood–served as a fitting place to begin the march given its implications.

“Primarily, the voices that have been centered in most pride events tend to be cis white gay males,” explained Jenn Anderson, a co-lead organizer for the 2017 march who has worked on the march since 2010. “The dyke march is really important because it’s a very in-your-face, loud way to say ‘we’re here and we also have some things we would like to see going on too.’ Our representation is very important to us.”

Within minutes of arriving at the park, the diversity, inclusivity, and positivity the march had promised to deliver was apparent to me. As a cis white gay male, I had anticipated my role in the day’s activities would mostly include supporting those around me (as not to detract from the dyke-centered space the march was focused on creating). However, after a few minutes, I’d already been given a list of chants for the march, a choir robe, and an invitation to join a performance by none other than Mr. Philly LGBT Pride 2017, Molasses Jones; I, of course, graciously accepted. As I stood in front of the crowd hooting and hollering in support of Molasses’ performance, I felt an overwhelming sense of acceptance and celebration from this marginalized sector of the community. Following the performance, the crowd continued to rejoice: this time in cheers of joy celebrating newly engaged Natalie and Megan. Natalie and Megan had shared their first date a year earlier at the Dyke March, and this year’s march saw them go from couple to fiancès just before the march began.

The kick off event came to a close and Amber Hikes took the stage. Amber, the executive director of the office of LGBT affairs for the city of Philadelphia, had been an organizer for the Philly Dyke March for ten years. “This wasn’t easy,” she said in a shoutout to this year’s organizers, “Getting dykes together is like herding cats.” She went on to emphasize the importance of the march for the visibility of marginalized members in the community. “We need to march for our own representation…so that we don’t forget our community is more than pretty white boys in speedos on floats! No shade to em…”

The march kicked off at 4:00 PM with the revving of motorcycle engines from the leaders of the parade. One of the leaders, affectionately nicknamed ‘Dykes on Bikes,’ was Jessamine Bristow. Jessamine has previously marched in Austin, Minneapolis, and San Francisco, though she took to her motorcycle for this march. “It was a great time, we had a lot of good marshals on bicycles and on foot stopping the traffic ahead of us, so really just good makin a lot of noise,” Jessamine recounted at the post-march festivities.

The Dykes on Bikes and parade marshals started their trek up 11th street. The march passed familiar sites and friendly faces in the Gayboorhood as we marched toward Broad Street. Upon turning onto Broad, the parade marshals turned to face city hall. Amber’s words on stage now echoed in the minds of everyone marching:

“When you see city hall, take a minute when you’re in the street…and take it all in. Know that today and all days, this is our city, these are our streets, and we are every bit a part of this community as anybody else. This is our community. So scream, chant, and make your voices heard.”

As we looped around City Hall, supporters stood and cheered on the sidewalk lining Broad Street. As the march passed each home-grown Philly cheerleader, the dykes cheered back louder, stronger, and prouder. The screaming and wooing at each and every ally was a reminder to the community that the dykes are here, and, more importantly, they are just as much a part of the community as everyone else. I heard a bellowing voice begin a chant into a megaphone: chant number 5 on my handy chant cheat sheet. The voice boomed, “Oh when the dykes, go marching in. Oh when the dykes go marching in.” This time the crowd, now louder and more energetic than ever, called back. “Oh how I want to be in that number! Oh, when the dykes go marching in!”

I caught up with Amber Hikes after the march to talk about what this march means to her. Being back in Philly, this time in a new role, has made this march so special to her. Attempting to give credit where credit was due, she humbly deferred our conversation to this year’s organizers and what the march represents. “There’s no march like the dyke march,” she reiterated. “I believe strongly that we have to support the most marginalized populations and in that way we receive our own liberation, so spaces like the dyke march and the trans march, are so incredibly important for exactly that reason”

Continue Reading
You may also like...
Related Topics:dyke march