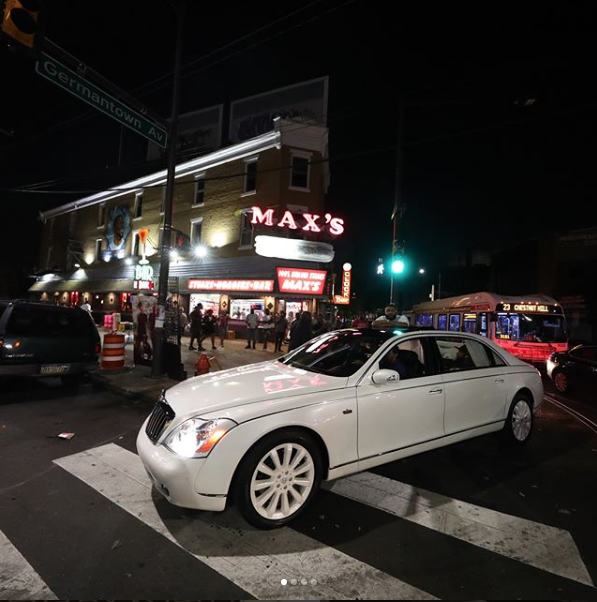 U KNOW I GOT GET ME A PHILLY CHEESE STEAK FROM #MAX’s it’s a NO BRAINER 🚫🧠 Philly thank you for all the luv !! #NOBRAINER #1 on iTunes ! @wethebestmusic @epicrecords @rocnation FATHER OF ASAHD ! Swipe to the left to go inside MAX’s .. BLESS UP!

If you follow DJ Khaled on social media then you know that he has a flare for the theatrics.  Loud and boisterous, Khaled has no qualms about drawing attention to himself.  So when he was in town for the Beyonce and Jay-Z On the Run II tour, it wasn’t a matter of if DJ Khaled will pop up for “fan love” but where.

Well, it turns that that Khaled went right into the hood with it and parked his rare Mercedes Maybach 62 S Landaulet Convertible right in front of Max’s Steaks off Erie Ave.

Landaulets are inspired by old coaches and carriages which is why only the back seats are convertible.  First introduced in 2003, Mercedes discontinued them in 2010.  During that time span only 1,000 were sold.

However, this unique model was recently re-released and DJ Khaled ended up with one of the 20 that were sold in the entire world!  So it wasn’t like DJ Khaled was able to discretely buy his steaks and leave.  He essentially brought Hollywood to North Philly.  Check out the IG posts and see the love he gets while ordering from one of Philly’s best spots.  At least he want to one of if not arguably the best steak spot in Philly.

Continue Reading
You may also like...
Related Topics:cheesesteak, dj khaled, max's, on the run tour, we the best

NBA 2K Gives Ben Simmons an 87 Ranking and He Isn’t Happy About It.
Take an Exclusive Look Inside the Last Blockbuster Store in the World!