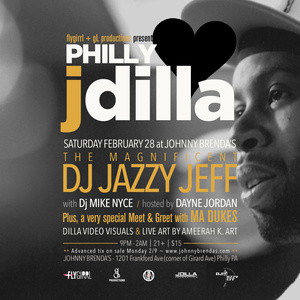 Arguably the best DJ on the planet, Philly native DJ Jazzy Jeff will be displaying his turntable skills this weekend at Fishtown’s own Johnny Brenda’s (1201 Frankford Ave.)

Normally Jazzy Jeff does his thing spinning an assortment of hip hop, jazz, and funk music to rock the crowd.  However, this Saturday Jazzy Jeff will be paying tribute to the late hip hop producer J-Dilla.  A super talented producer who passed away in 2006 from complications brought on by a rare blood disease, J-Dilla developed a hard core cult like following.  Primarily underground for most of his career, J-Dilla was a butting star just prior to his death.  Dilla passed away just 3 days after releasing his critically acclaimed album Donuts.  A beat masterpiece, Donuts is a mainstay in any hip hop head’s vinyl collection.

DJ Jazzy Jeff will continue to keep J-Dilla’s legacy alive as he will be spinning many of Dilla’s cuts from various projects he released.  For the bargain price of $15 you can experience the unforgettable sounds of DJ Jazzy Jeff on the 1’s & 2’s cranking out tunes from one of hip hop’s genius’.