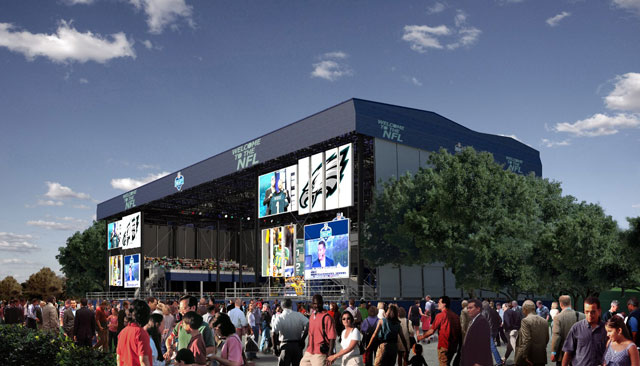 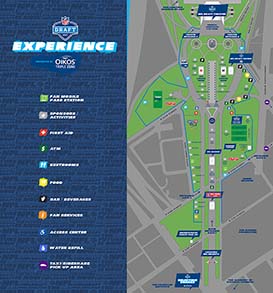 Jump as high as you can and hit the corresponding flag to discover your vertical reach just like at the NFL Scouting Combine!

Race down the field against your opponents and digital NFL players on a giant 40-yard long LED wall!

Test your long-distance accuracy by throwing a deep pass over defenders into a drop-in net.

Race through a series of obstacles and train like a pro.

Test your ability to kick a field goal through NFL uprights.

Master one of the most difficult throws for an NFL quarterback by throwing the ball on an arc over a defensive player and into a net.

Try on NFL equipment and feel what it’s like to get dressed for gameday.

Test your ability to kick a field goal through scaled down NFL uprights.

Test your ability to snap the ball like a pro.

Run, jump and turn through a simulated world in an app designed by NFL PLAY 60 and the American Heart Association.

Take a Virtual Field Trip with the National Football League and the American Heart Association to learn how easy and fun it is to get active and heart healthy.

Race through agility drills just like the pros and test your high jump abilities, leap over obstacles and bob and weave through mini tackling dummies.

Experience gameday with an app designed for kids to play fun games, customize their own avatars, watch awesome videos and unlock cool digital gear from their favorite teams!

Visit a replica NFL locker room as it appears on gameday. Experience the sights of a real NFL pregame with sleek translucent LCDs!

As you enter NFL Draft Experience, find your favorite NFL team oversized helmet and have your photo taken by an Aquafina brand ambassador. Share your photos through your favorite social channel and Fan Mobile Pass.

Parents can register their children for the Eagles Kids Club at NFL Draft Experience. Kids Club members receive a welcome kit and invites to exclusive contests and events, such as the annual Eagles Kids Club Halloween Party.

Step inside a uniformed body-cast mold bearing the insignia of your favorite NFL team and have a friend snap your photo.

Stop by the NFL Auction in the NFL Museum for cool giveaways and chances to win NFL instant prizes by checking in with your Fan Mobile Pass! View game worn and signed memorabilia available only on the NFL Auction website, and learn about the charities and foundations that the NFL and NFL Auction support.

Enjoy selections from some of Philadelphia’s best restaurants in a “taste of the town” tailgate.

Visit the official NFL Draft set and take your spot behind the podium.

It’s the hottest place to drink the coldest beer and cheer your team at the NFL Draft. Bud Light – we don’t just brew beer, we make friendships!

NFL Network Desk brought to you by Ford F-Series

Take your seat behind the NFL Network Total Access desk and break down the 2017 Draft!

Watch local Philadelphia artists paint the future as they create unique paintings portraying the story of each first round Draft pick! Take a picture with this full-scale mural created to honor the NFLâs future stars.

Fans may take their photo with the NFL’s most iconic trophy.

Zip to the Future presented by Oikos Triple Zero FMP

Fly over NFL Draft Experience on a 100-yard zip line! Limited availability is open on a first-come, first-served basis.

Stop by the NFL Shop at Draft presented by Visa for the largest assortment of NFL Draft merchandise, including customizable Nike jerseys and the official 2017 NFL Draft Cap by New Era and exclusive Draft gear.