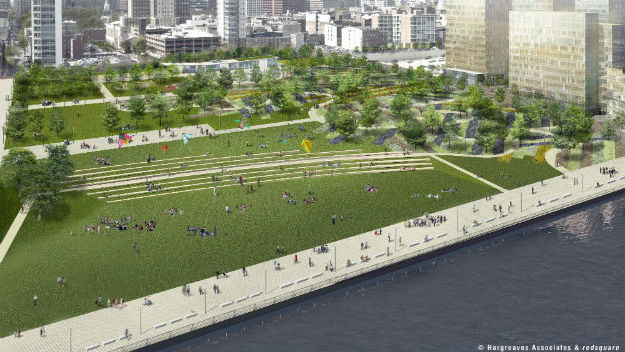 It’s a far cry from Boston’s “Big Dig” but Philly is really trying their best to connect the city with the waterfront.  Currently I-95 acts as a huge divider that detours pedestrians from making their way over.  However, just recently Mayor Kenney released his plan for a $250 million dollar green “cap” park.

The man-made park would stretch from Walnut to Chestnut and connect Old City with the area around Spruce Street Harbor Park, effectively creating 11 acres of green space.  The project would set the city back $90 million with the rest of the funds coming from the state and foundations (what the mayor is hoping for at least).  Mayor Kenney projected that the new park would give the city a $1.6 ROI over the course of the next 25 years.  These funds would be generated from the increase in business due to the park.  These are rough estimates which seems a little generous. I mean the area will need a little bit more than a park to make business boom.

If started this year the project would take about 6 years to be completed. So expect a ton of more delays and traffic due to increased construction on a stretch of highway that is already teeming with construction zones.  What do you feel about this project?

Continue Reading
You may also like...
Related Topics:park over i-95

Food & Beer Festival “The Brewer’s Plate” Will Take Up All 3 Floors at the Kimmel Center!
The National Constitution Center is Hosting a Prohibition Party for Their Upcoming Exhibit!