Chill Moody Sneaking in Tastykake Krimpets Into the Grammys Is the Most Philly Thing Ever! - Wooder Ice 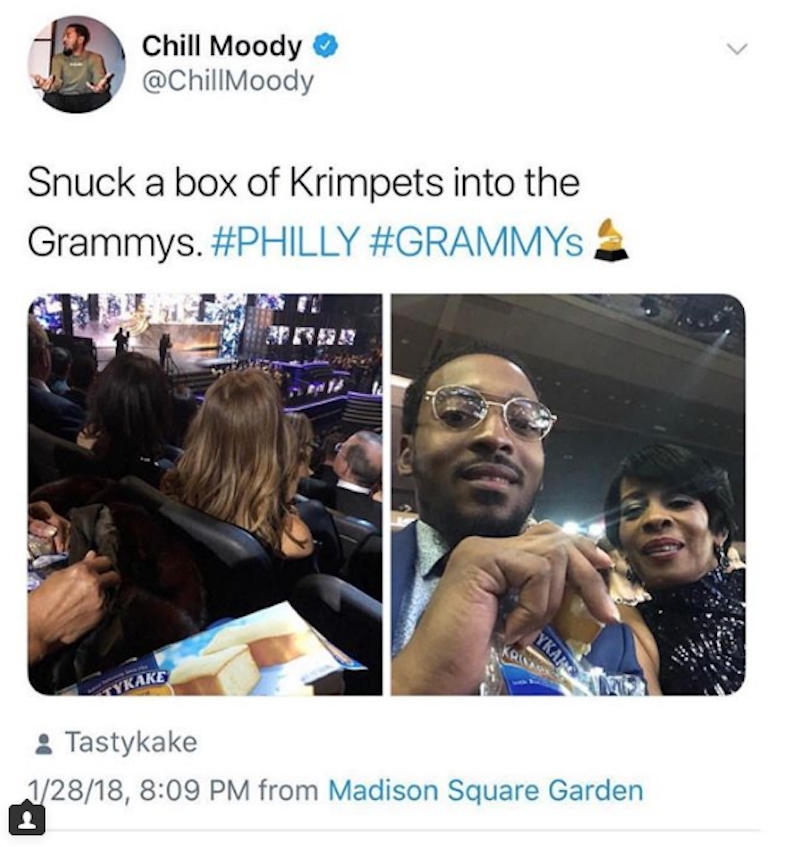 Chill Moody Sneaking in Tastykake Krimpets Into the Grammys Is the Most Philly Thing Ever!

Chill Moody Sneaking in Tastykake Krimpets Into the Grammys Is the Most Philly Thing Ever!

We’ve all snuck in a treat or two at various venues especially places such as the movies.  However, what about upscale shindigs? Well in what will probably become the most Philly thing to ever do, rapper Chill Moody brought Philadelphia’s most popular treat with him to the Grammys!

I personally spoke with Chill before he headed to New York to get his thoughts on attending music’s most hallowed award show.  At first I thought the main story line was the fact that he was taking his mom to the Grammys. We’re talking an event where photogs care as much about who you have on your arm just as much as what you’re wearing.

Although taking his mother was a sweet gesture, Chill had an even sweeter gesture to make.  Literally. His original plan was to take a bunch of boxes and “lace his entire row,” as he put it.  However, it looked like he was only able to sneak in one box. To document his co-op mission, he posted a humorous selfie with mom dukes and of course a box of Tastykake Krimpets.  It’s going to be hard for anyone to top this!

Continue Reading
You may also like...
Related Topics:chill moody, grammys