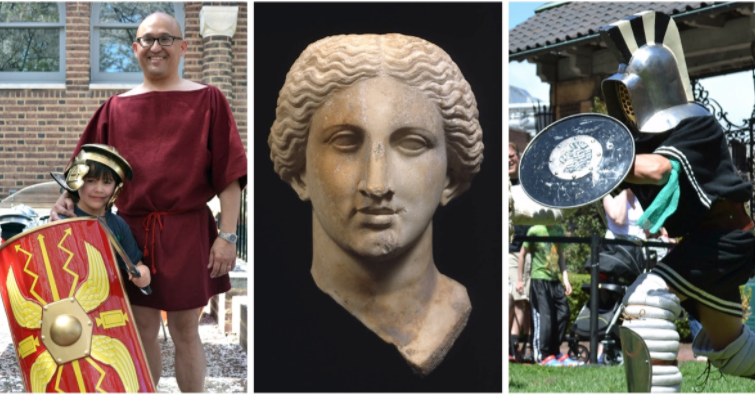 Celebrate Rome’s 2,770th Birthday at the Penn Museum with Gladiator Fights and Gelato

Celebrate Rome’s 2,770th Birthday at the Penn Museum with Gladiator Fights and Gelato

Felix natalis dies! Roughly translated, that is “happy birthday” in Latin—a great phrase to use at the royal celebration of Rome’s Birthday Saturday, April 22, 11:00 am to 4:00 pm, at the Penn Museum in Philadelphia. Guests will be treated to thrilling gladiator fights and interactive tactical demonstrations of Roman militia, tours in the Worlds Intertwined: Etruscans, Greeks and Romans suite of galleries, Roman paper mosaic-making craft tables, talks and minute “pop-up” presentations on ancient Roman history and life in the galleries—and a chance to discover authentic Italian gelato, the perfect birthday treat!

Ciao Philadelphia, a region-wide celebration of Italian culture organized by the Italian Consulate in Philadelphia, and Capogiro Gelato Artisans, a locally based, internationally acclaimed company, are partners for the celebration.

It’s all FREE with Museum admission donation ($15 general admission; $12 for seniors [65+]; $10 for full-time students [with ID] and children [6-17]; free for Museum members, children under 6, active U.S. military and PennCard holders). Attendees are encouraged to get in the spirit of the day; those daring enough to wear a toga, legionnaire, or gladiator attire receive half-off the price of admission!

A Great City is Born
As legend has it, Rome was founded April 21, 753 BCE on the banks of the Tiber River by Romulus and Remus, twin brothers abandoned after birth and raised by a she-wolf. When a fierce argument erupted between them, Romulus killed Remus and gave his own name to the tiny settlement that would grow into a great empire.

Gladiatorial Bouts
Gladiators from Ludus Magnus Gladiatores (The Great School of the Gladiator) vie to “win the crowd” with battles at 11:30 am and again at 3:00 pm. Sword-wielding fights take place in the Museum’s outdoor courtyard (indoors in event of rain) with reenactors hailing from Philadelphia, New York, New Jersey, and as far as Maine. Visitors can see a roster of gladiators, dressed in a range of armor with weapons that match their fighting styles. In between risking life and limb, Ludus Magnus Gladiatores demonstrates fighting techniques and tells the history of pitting and pairing gladiators in combat.

Roman legion soldier reenactors are a powerful presence at the event as well, serving as arena guards and fight presenters. Guests of all ages can learn more about Rome’s powerful militia, discovering what it would take to enlist, and trying on some reproduction helmets and other gear, at an ongoing presentation offered by Penn Museum docent Joe Balmos.

New Discoveries about the Ancient Roman Empire
Guests interested in learning more about contemporary research on the ancient past can attend a short lecture. At 2:00 pm, Penn Museum’s Dr. C. Brian Rose, Curator-in-Charge of the Mediterranean Section and Past President of the Archaeological Institute of America, takes armchair archaeologists on a whirlwind tour with “New Discoveries in Ancient Rome,” a lecture co-sponsored by the America-Italy Society of Philadelphia.

Graduate students in the University of Pennsylvania’s Art and Archaeology in the Mediterranean World and Classics departments get in the act with 60-second “pop-up” presentations about Rome—guests can look for them to “pop up” in the Worlds Intertwined: Etruscans, Greeks, and Romans galleries throughout the day.

The Conestoga High School, Berwyn Latin Club, part of the Pennsylvania Junior Classic League, joins in the day, offering a wide-ranging, ongoing drop-in presentation. Guests can learn about names in ancient Rome, ancient Roman architecture, Latin—a language the group says is alive and well—and ancient graffiti. The purpose of the Junior Classics League “is to encourage an interest and an appreciation of the language, literature and culture of ancient Greece and Rome.”

At 11:00 am and again at 1:00 pm, the artistry of Roman mosaics is explored at a hands-on workshop for all ages. Guests work in groups to help create one giant mosaic comprised of over 4,000 tesserae! In addition, everyone can make a smaller paper mosaic at a day-long mosaic craft station.

A Sweet Celebration
At 12:30 pm guests are invited to meet Stephanie Reitano, co-founder and Chef of Capogiro Gelato Artisans, a locally owned company that operates out of a dairy and has five retail locations. Stephanie has developed proprietary and protected recipes that allow for over 350 gelato and sorbet flavors to be produced on-site at each retail location. Her gelato has received widespread media acclaim, including in the National Geographic Traveler, which called it “The creamiest gelato you’ll taste this side of Capri.”

Stephanie offers a short talk about authentic Italian gelato, before providing samples of classic Italian flavors that, she explains, “must be in any respected gelateria in Rome”: Pistacchio, Bacio, Amarena, and Zabaglione. Following her talk, samples are available while supplies last!

For Italian food enthusiasts, the Museum’s Pepper Mill Café joins in the celebration with Italian-inspired luncheon options for purchase.

Exploring the Ancient Mediterranean World
Penn Museum’s suite of galleries, Worlds Intertwined: Etruscans, Greeks, and Romans, features more than 1,400 ancient artifacts, including marble and bronze sculptures, jewelry, metalwork, mosaics, glass vessels, gold and silver coins, and pottery of exceptional artistic and historical renowned, all drawn from the Museum’s Mediterranean collections, dating from 3000 BCE to the 5th century CE. A large-scale interactive of the region map helps visitors visualize how these ancient civilizations overlapped and co-existed thousands of years ago.

Rome’s Birthday is the final program in the Penn Museum’s World Culture Days 2016–2017 fall-through-spring lineup. The popular series is designed to introduce visitors of all ages to the rich cultural traditions found throughout the Museum’s galleries and, indeed, throughout the world.

Continue Reading
You may also like...
Related Topics:penn museum