An Original Copy of Benjamin Franklin's "The Pennsylvania Journal'' Is Up For Auction! - Wooder Ice 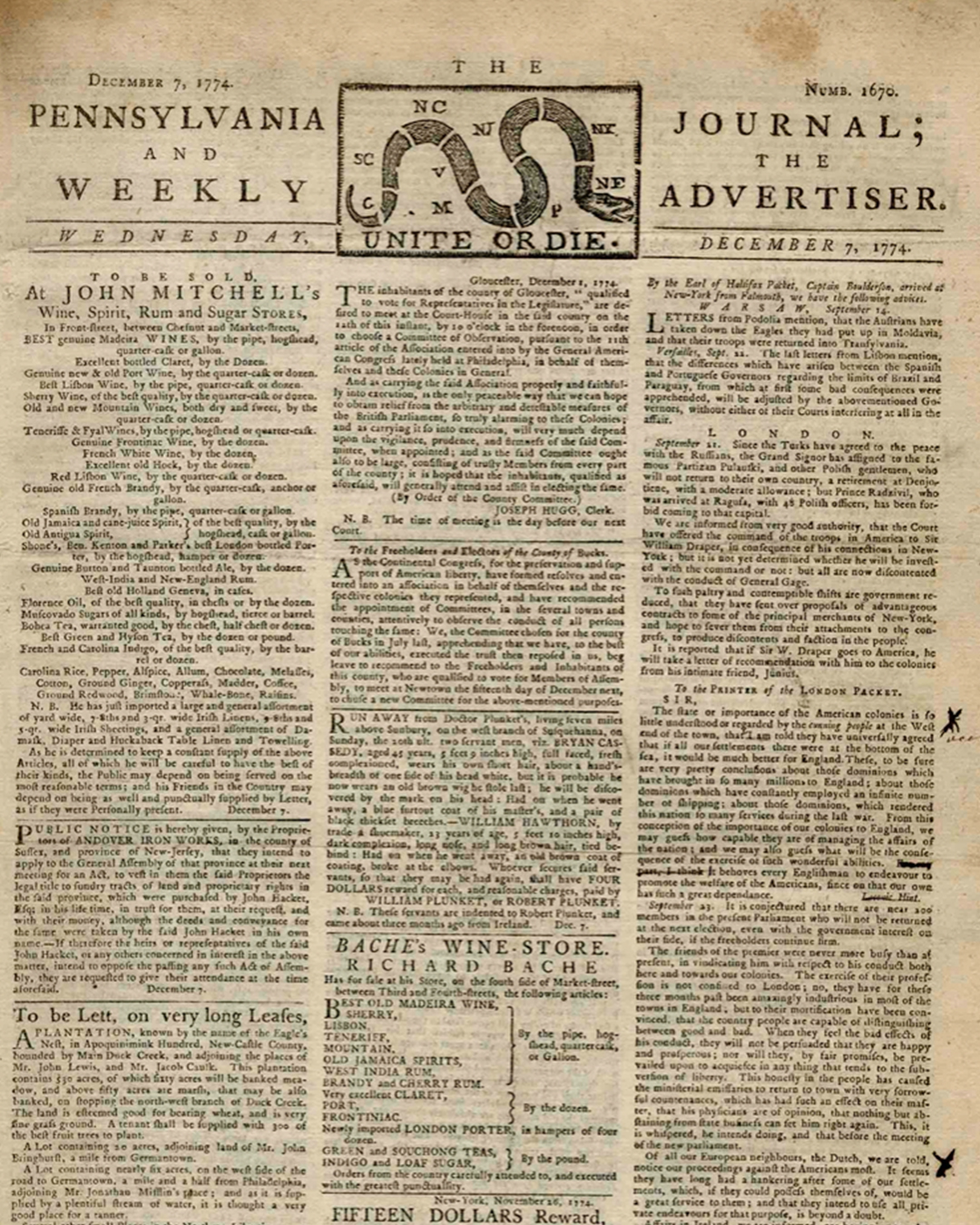 An Original Copy of Benjamin Franklin’s “The Pennsylvania Journal” Is Up For Auction!

An Original Copy of Benjamin Franklin’s “The Pennsylvania Journal” Is Up For Auction!

You can own a piece of history for the right price. An original copy of Benjamin Franklin’s ”The Pennsylvania Journal” newspaper, with the famous ”Unite or Die.” masthead is being auctioned off by Nate D. Sanders Auctions.  The starting bid is $25,000 and bidding ends Thursday at 5 pm.

The masthead featuring the snake that became the rallying cry of the Revolutionary War. Newspaper is number 1670 from 7 December 1774, shortly after the passage of the Intolerable Acts which were enacted by the British to make an example of Massachusetts as punishment for the Boston Tea Party. Instead of breaking the colonists, however, the Intolerable Acts led to the First Continental Congress, where the colonies effectively conspirted to join forces against the British. This theme of unity would prompt Benjamin Franklin to use his famous masthead – considered the first political cartoon – for a short period of time from 1774-1775 on ”The Pennsylvania Journal”, of which this newspaper is a rare example. The masthead was first used by Franklin on 9 May 1754 when it was labeled ”Join, or Die”, with Franklin changing it to ”Unite or Die.” during the Revolutionary War, also inspiring Paul Revere to use the masthead for his ”Massachusetts Spy” newspaper. The phrase and image of a dis-united rattlesnake would prove an enduring symbol of American independence, inspiring both the phrase ”Live Free or Die” and the ”Don’t Tread on Me” flag.

The newspaper has extensive coverage of British-colonial hostilities, including that of General Thomas Gage, the military governor of the Province of Massachusetts Bay, who was assigned by the British to implement the Intolerable Acts. Content reads in part, ”…all are now discontented with the conduct of General Gage…The state or importance of the American colonies is so little understood or regarded by the cunning people at the West end of the town that I am told they have universally agreed that if all our settlements there were at the bottom of the sea, it would be much better for England…It behooves every Englishman to endeavour to promote the welfare of the Americans, since on that our own have such a great dependence…By this time the Americans know their fate: That General Gage had…orders to prevent the congress at any rate, and to take those deputed into custody. If these orders were executed, it must either set all America in a flame, or damp the small fire of liberty that exited.” Additional content regarding the Acts includes, ”…as they convey the sense of the worthy FREEMEN of America against those oppressive measures adopted by a tyrannic ministry: success attend your worthy Countrymen–and may the assassins who attempt to invade the smallest part of the American constitution experiment the punishment allotted to traitors…May the brave Americans rise superior to all their unmerited oppressions & may they triumph over all their enemies!…” Newspaper runs 4pp. and measures 10.125” x 16.125”. A few editor’s marks on margins, overall very good plus condition, with the masthead prominent on the front page.

The Philadelphia Airport is Now Using “gita” Robots to Deliver Food & Merch to Passengers!
Art in the Age is Offering Virtual Cocktail Workshops!