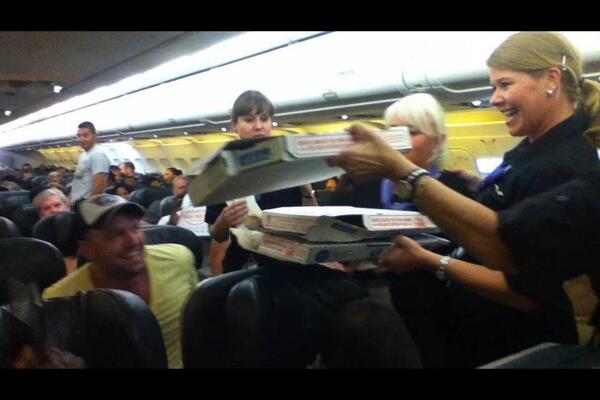 We’ve pretty much all been there, sitting on a runway waiting to take off with anticipation of reaching your destination when the pilot makes an announcement that the flight will be delayed.  Sitting still on the tarmac is no fun especially in cramped business class quarters.  Fortunately for myself the longest I’ve been delayed was about 30 minutes but I’ve heard horror stories of delays of up to several hours.

In this case a Frontier Airlines flight bound for Denver was diverted due to heavy rain.  The flight landed safely in Cheyenne where it sat for several hours.  Knowing that the passengers were getting weary and hungry the pilot did something that to my knowledge has never been done before.  He ordered pizza.

The pilot placed a call at about 10 pm to a Cheyenne Domino’s Pizza and placed an order to feed 160 people.  In total 35 pizzas were delivered to the stranded flight and all on board were more than grateful.

It seems as though that the pilot placed the order just in time as the manager of the pizza shop Andrew Ritchie was just sending his crew home when he got the call. “I put my hand over the phone and I said: ‘Guys, you’re coming back,” he was reported as saying.  According to Ritchie the store usually makes this number of pizzas in an hour and the pilot needed them in 30 minutes.  Nevertheless the pizzas were delivered on time and passengers were more than thrilled that the pilot made most of an unfortunate situation.  Besides how often do you get to attend a plane pizza party.